High-school-sweethearts-turned-conservation-power-couple Dereck and Beverly Joubert are truly some of the most remarkable innovators and environmentalists in the African safari world today. They began their career—and fell in love—tracking big cats in the Botswana bush, and they advocated for their protection with their award-winning films for the National Geographic Society, for whom they continue to work as Explorers-in-Residence today. They have since founded the Big Cats Initiative, which currently funds 80 grants in 27 countries for the conservation of big cats; contributed over 25 films to National Geographic, with some of the most well-known films being The Last Lions and Soul of the Elephant; published dozens of books and scientific research papers; established the Great Plains Foundation, which manages some of our favorite luxury safari lodges and concessions, from Botswana to Zimbabwe; and founded a groundbreaking rhino conservation project, Rhinos Without Borders. They have created a life together that is filled with romance and epic adventure—as well as a fair amount of danger, as evidenced by a near-death experience that Beverly suffered in the bush in 2017. (Hear the story firsthand in a podcast of this conversation, coming soon). However, this only deepened the couple’s connection to Africa and their commitment to conserving her wild landscapes and the creatures that inhabit them.

As part of our ongoing Indagare Global Conversations series, Indagare members and friends recently joined our founder, Melissa Biggs Bradley, for a virtual trip to South Africa to meet this incredible couple—via Zoom—and talked conservation, the magic of safari and storytelling, and the future of travel and sustainability, in the aftermath of COVID-19. To hear the incredible story of how they survived a buffalo attack that nearly took Beverly’s life, tune into the podcast of this conversation, coming soon.

A Conversation with Dereck and Beverly Joubert 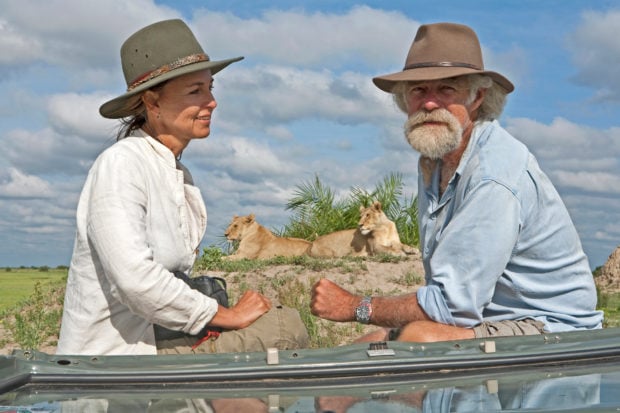 Melissa Biggs Bradley: I would much rather be sitting in a camp with you at this moment, but I’m very happy to have you here on Zoom. It’s great to see both of you. Let’s start this conversation by finding out where you are in lockdown, and what it looks like?

Dereck Joubert: Well, I would say come on out—we’ve got lots of space at the moment! We’re in South Africa; we were on our way to Botswana and Zimbabwe to check on the camps there, and then lockdown happened. We sort of have mission control here, so it’s fine for us. We are rising to the challenge.

Melissa: You have a resilient spirit, both of you. I know you have known each other for a really long time, but can you tell everyone how you met and how your collaboration began?

Beverly Joubert: We met in high school—it must have been in the ‘70s. Both Dereck and I knew that we had this yearning to discover more about wild Africa. When we were in our twenties, we decided to go on a trip together, and we went into Botswana to canoe the Okavango Delta. We fell madly in love with each other and with the place, and we knew that we wanted to continue exploring. Shortly afterwards, we moved to Botswana and we started filming lions in the Savuti region, and we discovered such unique behavior that nobody else was seeing. So that’s when we picked up cameras and started our filming career—and we’ve never looked back. We’ve been partners in marriage—in 1988 we got married, after living in the field—and we’ve been partners in conservation and in all our films. And that’s really what pushes us forward—we can share our passions, and we are a stronger force, together.

Dereck: All I can say is…in those early ventures out into the bush, there wasn’t a lot of clothing involved [laughs]. 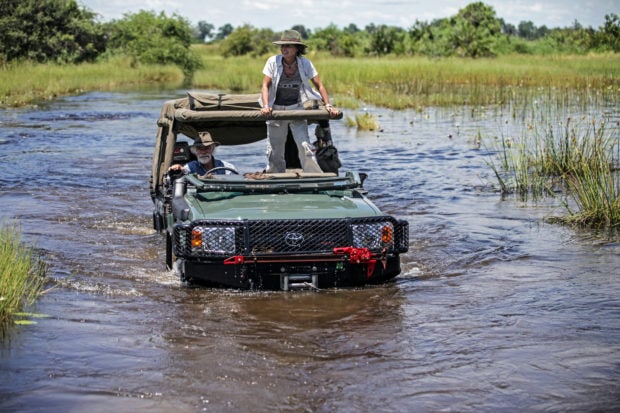 Melissa: How did you make the jump from being filmmakers to being tour operators with camps?

Dereck: We were kids out of college, into the bush, falling in love—with each other and with the spirit of Africa—and then rolling up our sleeves and saying, “We need to be part of this narrative. We need to be part of the solution, and even the grubbiness and the harshness of Africa, because it’s in our DNA. We wanted to identify ourselves as Africa. And from doing some scientific research, filmmaking and writing books, we then evolved into forming the Big Cats Initiative with the National Geographic Society. And that was saving one lion and one leopard at a time—but at some point we realized that might not be the only solution. 60 percent of lions live outside of any protection at all. So we designed Great Plains around the notion of buying up as much of this unprotected land as possible, and then protecting it. The only way to fund that was through lion conservation tourism, which is where we are now.

Beverly: It is also key to our project to get the local communities to join forces, so that they are ambassadors for those areas as well; they really are the new conservationists in Africa. And for travelers, coming to places like Great Plains is a first step forward in helping us to do impactful conservation in those areas.

Melissa: Your part of the world is so dependent on tourism. Do you have concerns about the immediate impact that lockdown is going to have on the communities where you work?

Dereck: We’ve just gone from what could have been a 50-billion-dollar-per-year income stream into Africa—based on tourism dollars—to zero. Many safari camps will be left empty. The income stream at some point is going to dry up between tourism and those communities. And so it’s the perfect storm, where there is no policing in some of the big areas, where people are going to be left jobless. Poachers will move around freely. And it’s a vicious circle. Because this possibly all started in the wet markets in China, then created global economic collapse, which has stopped tourism, which will lead on to community poverty, which will lead to more poaching, and then straight back into the wet markets. So we have to break that cycle…We need to prop up the rangers who are going to be left without jobs. But now, more than anything, on a global scale: now is the time to ban these wet markets and make sure that we are not having people collecting wildlife from the poachers—pangolins, bats, and all the other 54 species that you often see—and consuming them.

Just today, I was writing up a document about how Great Plains will change. There will be little things like hand-washing protocols, and how you make sure that the tents are sterilized; taking seats out of our vehicles, so that there are only four people per vehicle, and there is enough space for everyone to feel very comfortable. We’re also taking seats out of aircrafts, so they’re not all cramped together. And just greeting people in a polite and respectful way [with a bow], rather than shaking hands or doing crazy things with elbows. I think that safaris are going to change, and we’ll also find families traveling together more, and spending longer in a camp. Because shifting around is increasing the risk, so we’re seeing people wanting to come for 10 days at a time or more…For post-COVID, one of the things that we are also looking at is hiring a doctor and putting nurses in each camp, so that if there is a case, we can get on it immediately. We are all rewriting the script as we speak. 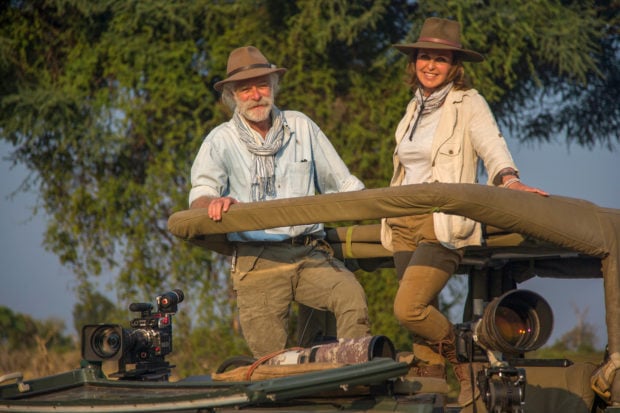 Dereck and Beverly in Brief

Is there a charitable organization that you are connected to where people can make a donation if they want to make a positive impact?

What are you reading?

Dereck: I’m reading Jared Diamond’s Collapse. It talks about the collapse of societies and ecosystems and environments. Jared is a close friend and very talented writer.

Beverly: Jared also wrote Guns, Germs and Steel, which I am reading. It looks at how we as humans can carry a virus all the way around the world. There’s another interesting one I’m reading—End of Days by Lindsay Harrison and Sylvia Browne. It traces predictions of the end of the earth, through time and different religious cultures. And you might wonder, Why would I read something so bleak?, but I think it’s important to understand that we’ve lived beyond all of these predictions.

Do you have a favorite place for relaxing?

Beverly: Even though we’re working, being out in nature is a way of being zen and centered for me, even though at times we are physically exhausted. So probably the Okavango Delta.

Dereck: And if we do go away at all, it’s someplace like the Seychelles, where we can be active, and diving, and being introduced again to a world under the surface that we don’t usually see.

Is there something you always have, other than a camera, in your carry-on?

Dereck: You know, Beverly is quite small, so I stuff her in the carry-on from time to time [laughs].

Beverly: For me it’s homeopathics and melatonin, so we don’t feel the jet lag.

Dereck: Really, I always bring three things: a flashlight, even if I’m going to New York, $100 and usually a scarf. 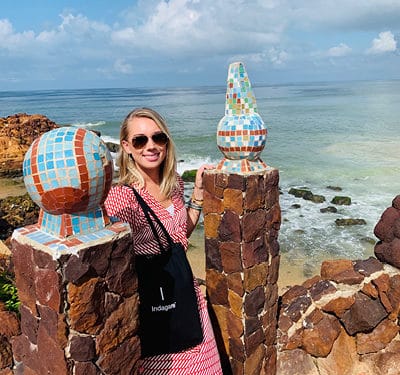 “When we got back after the accident, I remember getting out of the vehicle and putting my hand down on the ground in Botswana and feeling the sand trickle through my fingers. I wanted to know if I still accepted Africa and if Africa would still accept me. In many ways what I was doing was redefining my relationship with nature, and I think we’ve got an opportunity now to redefine our relationship collectively with nature.”