Just Back From… Egypt

Home to one-third of all of the world’s antiquities and the only remaining one of the Seven Wonders of the Ancient World (the pyramids at Giza), Egypt has drawn tourists for thousands of years. From the Greeks and Romans to Napoleon and Mark Twain, travelers have come to see the glorious temples built by the pharaohs. But following Egypt’s 2011 revolution, tourism rapidly declined.

Today, however, as the country experiences continuous political stability under President el-Sisi, open-minded travelers are slowly returning. After all, the ancient Egyptian dynasties spawned influences—religious, linguistic, political, military, medical and cultural—that have impacted virtually every society that followed them. Walking through the pharaohs’ 4,000-year-old temples and tombs, standing in the shadow of the Sphinx and being face-to-face with the throne and childhood toys of King Tut offer both a grandeur of achievement and an intimacy across millennia that is hard to wrap your mind around. For this and the following reasons, now is a particularly compelling time for curious explorers to travel to Egypt. 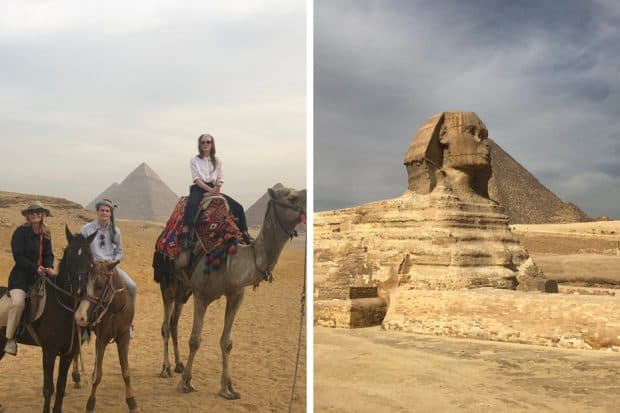 Some trips live up to their billing and many do not. Few exceed them. And when my husband and I thought about the places we most wanted to share with our children, Egypt topped the list. We had both been before, but after returning with our 17 and 19 year olds we all agree that the country is one of the places that has left the greatest impression on us all, even with our high expectations.

I cannot think of a destination that offers more layers of culture than Egypt. In fact, no other civilization has an entire academic discipline devoted to it; Egyptology is devoted to the ancient dynasties’ history, language, literature, religion and art. Greece, India and China certainly compare in terms of having rich civilizations, but their spread-out geography alone makes getting a concentrated grasp complicated. Egypt’s treasures, conversely, are concentrated between areas near Cairo and up the Nile along the east and west banks between Luxor and Aswan, allowing visitors to see much of the ancient civilizations’ remains in a matter of days.

Indagare’s favorite guides are Egyptologists who will take visitors around the monuments and spoon-feed wisdom and discovery day after day. Grasping the society and history behind Abu Simbel, the Valley of the Kings and Queen Hatshepsut’s Temple is mind-bending. A great guide will put the sites in context and share the complex histories that unfolded in the shadows of Karnak Temple, which is larger than Angkor Wat and two thousand years older, or the Pyramids. I felt like I was taking a crash course in the greatest hits of monuments, with every visit of grand finale proportions, and yet they kept on coming.

Moments spent between the sights were memorable too, because traveling down the Nile is like drifting back in time. The landscape—where swaths of palm trees and greenery along the river’s edge quickly give way to the Sahara and mountains of sand—has a hauntingly familiar quality, as it remains so little changed from how it must have looked in Biblical times. We passed mud villages that evoked memories of the stories that have been passed on for centuries. To see the ancient monuments without visiting modern Cairo is like seeing only one side of a coin. You need to spend a few days in Cairo for a glimpse into the complexities of the modern Middle East, where a tug of war is being waged between modern and traditional Islam.

2. Cairo and the Nile feel entirely safe, despite most people’s impressions 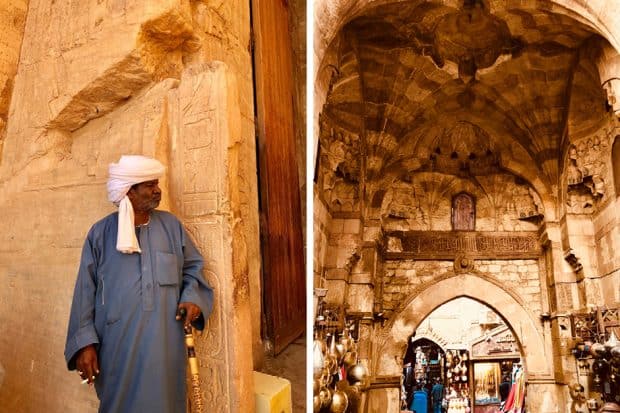 A guardian at the Temple of Abu Simbel; a street in Cairo

There is no question that after the country’s former leader Mubarak resigned, Egypt experienced a huge spike in crime, particularly carjackings and petty theft. However, since the second uprising, which put el-Sisi in power, the military is firmly back in control and determined to keep the rule of law and order as well as to root out terrorism. While acts of terror have occurred this year in Cairo and the Sinai Peninsula, they have not been more numerous than those in the US or Europe and have targeted either religious or military sites—not tourists. In fact, the Nile delta around Luxor is reportedly the most heavily protected military zone on the African continent. Perception of danger could not be further from the reality that we experienced; we never felt unsafe during our eight-day stay.

3. The Egyptian people are welcoming and optimistic 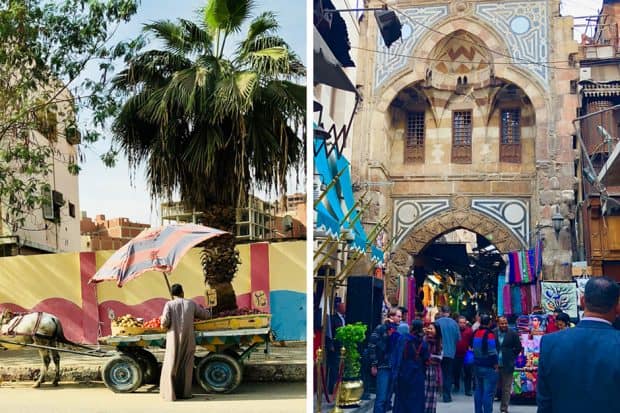 For many years, much of the Egypt’s foreign reserves came from tourism dollars, but when Mubarak was succeeded by the Muslim Brotherhood, the tourism industry vanished overnight. Nile cruise ships and many hotels stood empty for months. Since the military and el-Sisi came into power in 2014, however, visitors have been slowly returning. According to an Egyptian in the travel industry, one foreign guest’s average expenditure benefits—directly or indirectly—approximately 36 people. The gratitude that those in the hospitality industry feel for the return of travelers and the positive impression that they hope will spread and attract others is noticeable.

4. The prices are reasonable 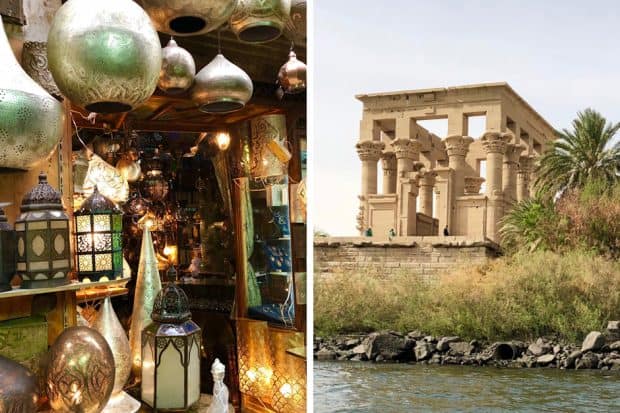 Lanterns in ancient Cairo; the Temple at Philae on the Nile

President el-Sisi’s austerity plan and the devaluation of the Egyptian pound has been very tough on the locals, but it benefits visitors, as trips are a relative bargain compared to even two years ago. (In 2015, $1 USD was equal to 7 Egyptian pounds. Today it is equal to 17.7, increasing in value almost two-and-a-half fold in 18 months.) The lack of foreign investment, though, means that the hotel and tourism infrastructure improvements have been delayed, so while there are some luxury hotels in Cairo and a few top-notch boats that cruise the Nile, visitors need to choose their accommodations carefully and there are various elements to consider. Indagare members can contact Indagare’s Bookings Team for help.

Learn more and sign up for the upcoming Indagare Journey to Egypt.

5. The crowds are small 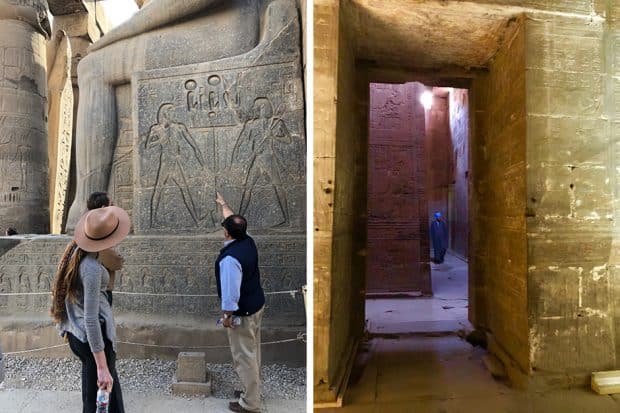 A guide explains a hieroglyph; the crowd-free Temple of Horus

At the peak of foreign tourism in Egypt in 2010, 14.5 million people flocked to Cairo and the Nile Delta. But because there is a still an impression that the country is unsafe after the uprisings of 2011 and 2013, the return of visitors has been only slowly increasing and last year reached approximately 35 percent of the pre-Arab Spring numbers—or less than 5 million visitors. This means that it is possible to see many of the greatest sites like Abu Simbel, the Temple at Karnak and the Pyramids alongside a fraction of visitors and, at times, be alone in their midst.

Previously, the crowds in peak seasons were so intense that one had to book a Nile cruise more than a year in advance and then you could be in a sea of thousands as you visited sites. On my recent visit, we found ourselves alone in chambers of the Temple at Philae and with the Solar Boat at the Pyramids. We were able to go into Nefertari’s Tomb (which only opened to visitors last year) and see the spectacular 4,000-year-old paintings with no one else. Yes, it was a Raiders of the Lost Ark moment for our family, and one we will never forget.

Read about an Indagare member’s experience exploring Cairo by foot.

Mark Twain expressed more beautifully than I can, the sense of awe that Egypt inspires. He wrote of being in the presence of the Sphinx:

“After years of waiting, it was before me at last. The great face was so sad, so earnest, so longing, so patient. There was a dignity not of earth in its mien, and in its countenance a benignity such as never any thing human wore. It was stone, but it seemed sentient. If ever image of stone thought, it was thinking. It was looking toward the verge of the landscape, yet looking at nothing—nothing but distance and vacancy. It was looking over and beyond every thing of the present, and far into the past. It was gazing out over the ocean of Time—over lines of century-waves which, further and further receding, closed nearer and nearer together, and blended at last into one unbroken tide, away toward the horizon of remote antiquity. It was thinking of the wars of departed ages; of the empires it had seen created and destroyed; of the nations whose birth it had witnessed, whose progress it had watched, whose annihilation it had noted; of the joy and sorrow, the life and death, the grandeur and decay, of five thousand slow revolving years. It was the type of an attribute of man—of a faculty of his heart and brain. It was memory—retrospection—wrought into visible, tangible form. All who know what pathos there is in memories of days that are accomplished and faces that have vanished—albeit only a trifling score of years gone by—will have some appreciation of the pathos that dwells in these grave eyes that look so steadfastly back upon the things they knew before History was born—before Tradition had being—things that were, and forms that moved, in a vague era which even Poetry and Romance scarce know of—and passed one by one away and left the stony dreamer solitary in the midst of a strange new age, and uncomprehended scenes.”

“I felt like I was taking a crash course in the greatest hits of monuments, with every visit of grand finale proportions, and yet they kept on coming.”