Just Back From… Madagascar

I must have sat and stared at that lemur for 30 minutes, just the two of us, 30 inches away from each other, him looking down on me, munching happily away on some fruit I didn’t know the name of, me gawking upwards like an idiot looking at an eclipse.

I couldn’t get it. It was a funhouse mirror’s version of a monkey. It had an elongated face like a dog, a squirrel’s bushy tail, and the hands of a human that had been pressed flat in a vice. Like a fox and a marmoset had fallen in love and eloped to Madagascar and populated the whole island with their spawn.

By the end of my trip, I’d be more used to them. The Sifakas would go bounding sideways across the clearing and I wouldn’t slow down. These monkeys-but-not were a constant presence in each place I visited and each one was a different flavor. Sifakas. Brown ground lemurs that walked in single file, their tails (twice as long as the rest of them) stuck straight up in the air like friends looking for each other in a crowded room. Crowned lemurs, sitting sedate in a low tree.

I’d wanted to go to Madagascar since I was a little kid. I used to watch Wild Discovery and see documentaries of ring-tailed lemurs scurrying about vast expanses of spiny forests and red earth and I’d dream of being the Bogan-accented madman chasing after them. I had the opportunity to make that dream a reality when, in early November, a trip to Rwanda and Kenya yielded a week’s worth of additional time. I was already in Africa—why not? 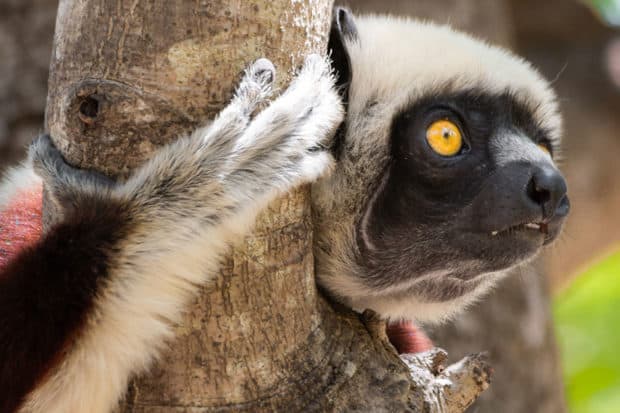 A sifaka on a tree

I landed at 2:00 AM. The flight was a turbulent one. We connected through Burundi and the Comoros and pulled into the Antananarivo airport amid a downpour that would close LaGuardia for days. Five hours later, I was on a small charter flight up north. An hour and a half after that I landed in Anjajavy. I had arrived. The journey to Madagascar is always a long one, but I arrived all the same.

Anjajavy is a private nature reserve in the Mahajanga province, a wet and woody subtropical region to the northwest of Madagascar. The red earth is dotted with granite tsingys—miniature karst structures—and the vegetation jumps between neon greenery I couldn’t recognize and the sprawling bare grey of the Perrier’s Baobab. The Renirano Andapibe joins the Indian Ocean just to the north through a forest of mangroves. To the south, a small village.

Right in the center was Anjajavy Lodge, with 24 villas lining the white sand beach. The remote lodge is a kind of understated luxury. It lacks bells and whistles but offers everything you didn’t realize you’d want out of a trip to Madagascar. Each lodging consists of two stories of dark wood. Palm trees wave in the wind around them. The bed faces out over the water and the sun rises and falls parallel to the horizon, which turns the whole sky into a cotton candy explosion every morning and evening, even while the sun itself is hidden by the protective, jutting arms of the cove. In the center of the lodge, a manicured lawn butts against the pool and leads directly into the Oasis, a specialized garden of native trees.

I sat on a wooden chair, waiting to check in, as I watched my first Sifaka bound across this lawn and into the oasis.

Locals in a field

Watching nature documentaries don’t quite prepare you for Madagascar. They are the reason most people go, and yet, something is lost in the translation of 3D to 2D. The lemurs themselves become just another animal for David Attenborough to discuss. But when you’re there, when you can look into their eyes and recognize that their form is familiar but their spirit is not, you can see that this land something different.

Madagascar as a whole is an alien world, a convergence of histories, a melting pot like America could only wish to be. Having broken off of India (not Africa) millions of years ago, it was first populated by voyagers from Borneo two thousand years ago. A millennia later, Africans sailed across the Mozambic channel. Centuries after came the French. Industrialization happened, but not everywhere. The locals still maintain a firm hold on their traditions, their Animistic belief in the power of spirits and the taboo. Even as the ever faster march of progress encloses them, the island maintains an ancient mysticism that feels around the edges like something that you once knew.

I had a better sense of this at one of my later destinations, Miavana. 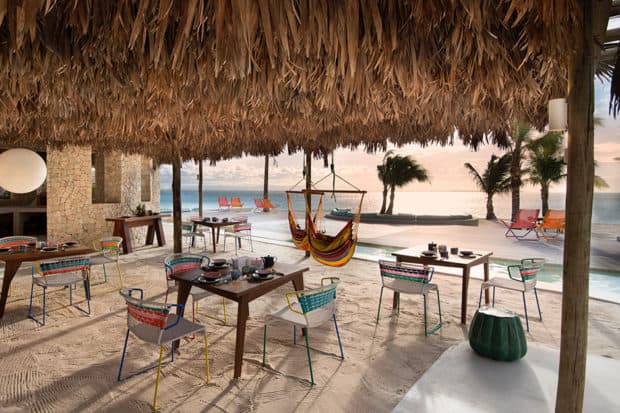 The private island resort is located in the far north, on Nosy Ankao. If Anjajavy is sub-tropical, then Miavana is tropical outright, with sucrose sand and saccharine skies that fall onto a bright blue horizon broken only by the occasional puffs where waves are breaking against the barrier reefs that surround the island. When you land (arrival is only by helicopter due to the hazards of navigating the reefs by boat), you’re greeted with a cocktail and a lei around the neck, which would feel tacky unless you remembered that Malagasy as an ancient culture is actually closer to Hawaiian than African.

The owner of Miavana is a Frenchman who fancies himself as a modern Indiana Jones. One room in the main area of the lodge, the Cabinet of Curiosities, is a museum of his best finds. It features a wide range of trinkets and artifacts from Madagascar’s past, from one of only 12 intact elephant bird eggs in the world (each one was large enough to feed a village of 70 people) to the shaman vestments of several different native tribes, each with their own significance and meaning. There are hundreds of butterflies pinned to the wall. Rusted out cannonballs from local shipwrecks. The skeleton of a Madagascar Pygmy Hippo sits encased in glass. And lining the shelves are hundreds of other items, works of God and works of man, each telling a story about the country as it has been and possibly will be. 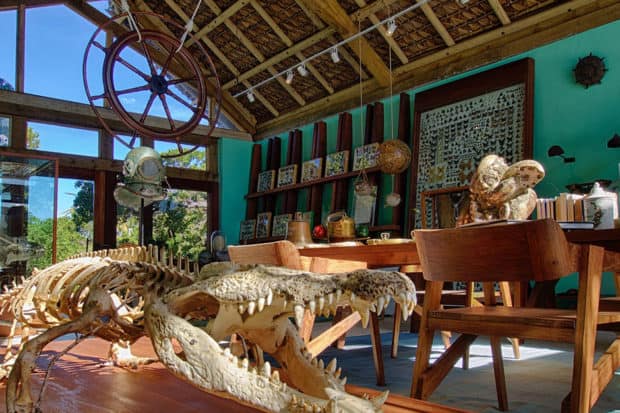 The Cabinet of Curiosities at Miavana. Courtesy Time + Tide.

I sat in the center of this treasure trove, absorbing some of the history with a gin and tonic growing dewy in my hand. It spoke to a nagging feeling I’d had while watching the lemur run about Anjajavy and amplified a feeling of wonderment I didn’t realize was stirring in my belly for every day I was there.

It took another gin and tonic before I could settle on words to describe what I was feeling. It was a renewed sense of my place in the world. Not my place, mind you, but humanity’s. Here was a world apart. Here was a space that developed entirely without us, and hasn’t entirely developed with us yet. The only places on earth more recently colonized were the remote islands of New Zealand or Polynesia, but even those have created a living symbiosis with mankind as they each feed off the other, sometimes in ways that overly benefits the human side of the equation, but the balance is getting better nonetheless.

Madagascar is on the precipice of discovering that symbiosis, or ignoring it altogether. Tourism in the country is increasing, but so too is the rapid destruction of its virgin forests, natural resources, and the alien life that exists only when mankind doesn’t.

Now that I’m home, I hope that conservation wins in Madagascar. It deserve to have its wild, alien heritage preserved. Madagascar is a strange place. It’s so beautifully, wonderfully strange.