On Morocco’s northwest coast, near the entrance to the Strait of Gibraltar, Tangier is one of North Africa’s most alluring cities. Its history, of course, is long: the Phoenicians set up a trading post here as early as 12,000 years ago. In the late 1800s, it became a diplomatic hub for European powers jockeying for colonial influence. And by the 1950s, it was a haven for artists, novelists, diplomats and European royalty. In the latter half of the 20th century, however, the White City’s international stature faded. But today, its historic white-washed homes have been restored, and sophisticated shops, cafés, bakeries and restaurants are popping up throughout the city from the Grand Socco and the Medina to the Casbah.

And soon, there will be a fabulous new hotel as well. Opening November 1, 2022, Fairmont Tazi Palace transforms a former private residence into a stylish home base for visitors to Tangier. Here’s what’s in store for guests.

Contact Indagare or your Trip Designer to learn more about Fairmont Tazi Palace and traveling to Morocco with Indagare.

On a hillside just west of the city’s historic center, Fairmont Tazi Palace conveniently places guests within 10 minutes of both the major sites in Tangier (including the historic center and the Corniche waterfront) and the forested peaks of Cape Spartel Reserve, which towers 1,000 feet above the Strait of Gibraltar.

Built in the 1920s, Tazi Palace served as a residence for one of the sultan’s chief advisors. At the villa’s center, an expansive network of skylights allows natural light to stream into a grand, three-story atrium. Original architectural details showcase a romanticized, royal take on Moorish style.

Like many of the city’s grandest villas, Tazi Palace was later abandoned, and sat empty for decades. After a multi-million-dollar renovation and expansion, the palace has now been restored—and transformed. New structures built into the hillside create a multi-tiered resort, now home to 133 rooms and suites. 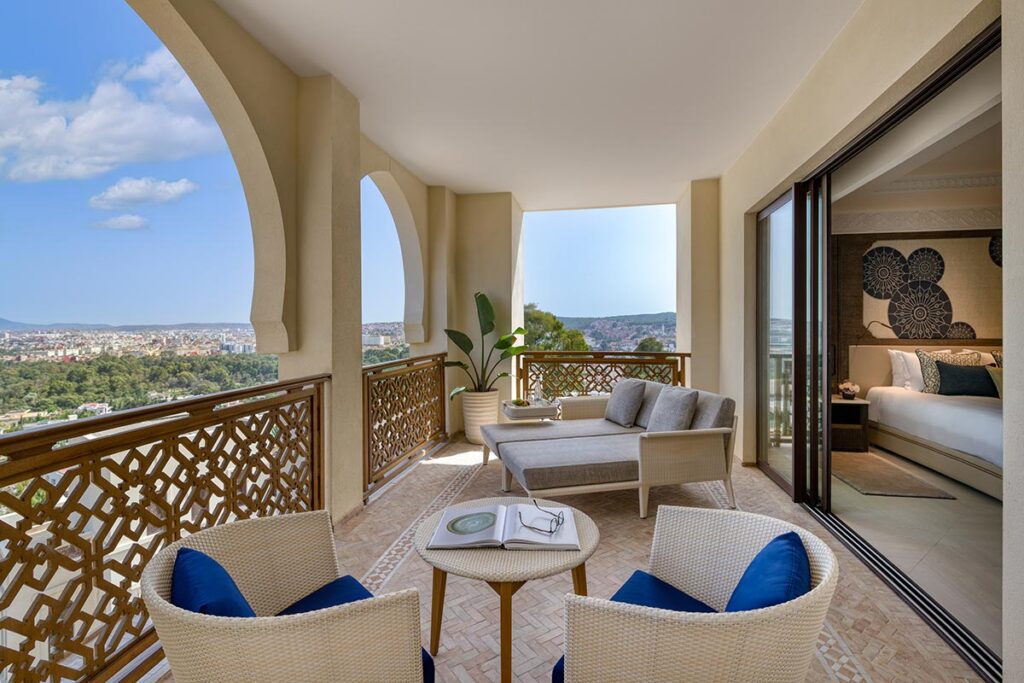 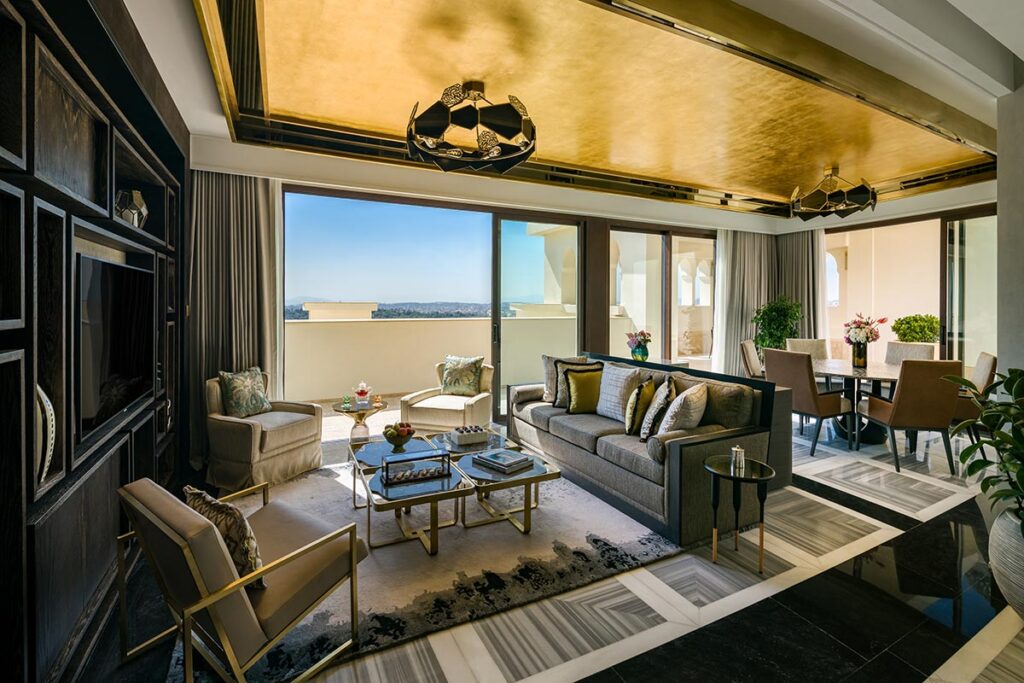 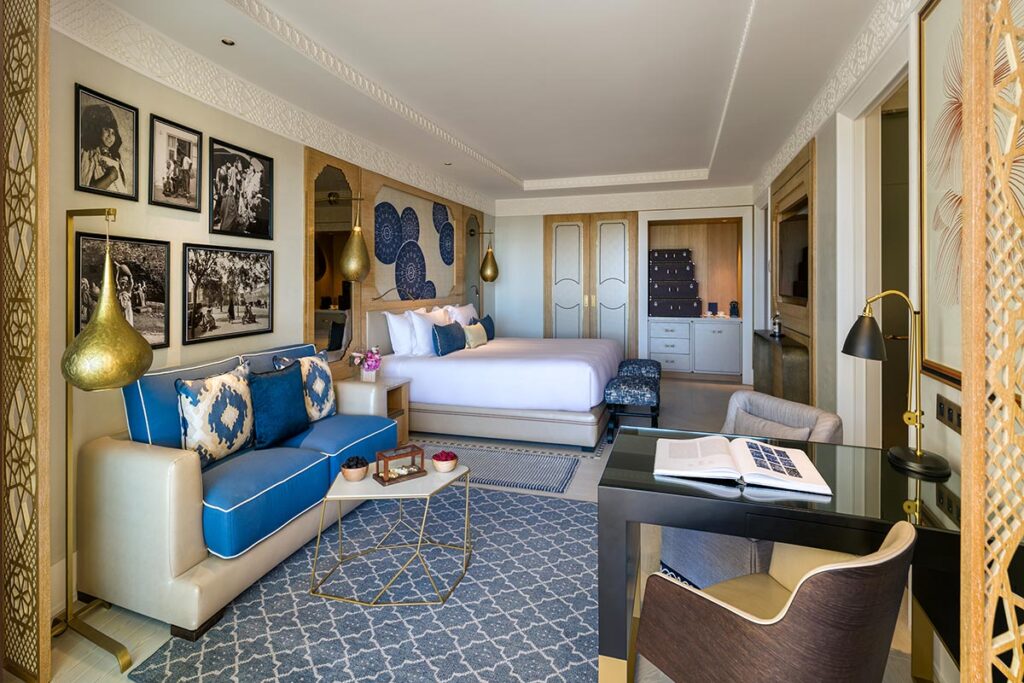 Interiors nod to the original palace’s embellished Moroccan style, but in a contemporary way that feels fresh and accessible. Expect hand-crafted, brightly colored mosaics, rich textiles, frequent use of bronze, gold and natural stones, plus wooden moucharabieh windows, with their wooden lattice-work. Accommodations, spread across several buildings, look out over Moorish-inspired gardens, the forested hillside, or the Old City itself. Many of the 133 rooms and suites have balconies, and families will appreciate multiple options for connecting rooms and accommodations with twin beds. Rooms begin at just shy of 500 square-feet, while the two-bedroom Katara Suite—at nearly 3,500 square-feet—is the hotel’s largest.

Between 10:00 a.m. and 6:00 p.m, Tazi Palace’s Kids’ Club will welcome children for daily programming that introduces them to Moroccan culture through cooking, games, arts-and-crafts workshops, dance classes and gardening sessions. 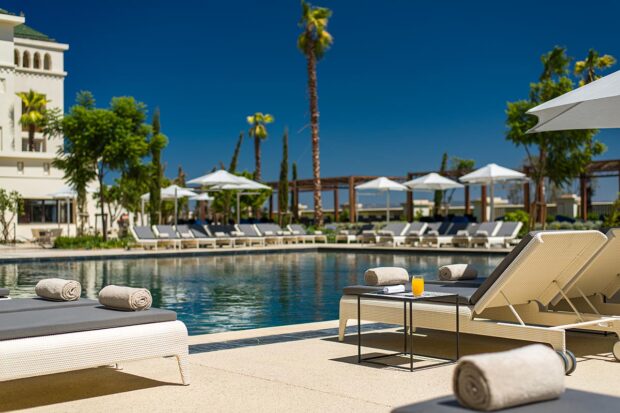 As befitting a palatial resort, Fairmont Tazi Palace will offer a palatial spa. Massages, facials and other body treatments will be on offer in 10 treatment rooms, while men and women will have access to separated hammams, scrub rooms, steam rooms, saunas and indoor/outdoor relaxation areas. There will also be a couple’s hammam, as well as a fitness center and yoga studio. And on the central terrace, an outdoor pool will allow for exercise as well as relaxation under the year-round Moroccan sun.

Eating (and Drinking) Through the Day

Nobody will go hungry at Fairmont Tazi Palace, with its seven different food and beverage venues. Crudo will serve Mediterranean cuisine breakfast, lunch and dinner, while Clementine is a juice, tea and coffee shop that will also offer light bites throughout the day. A seven-course afternoon tea is held at The Rose Room, with trolleys supplying finger sandwiches, pastries and a selection of teas. And poolside, Siddartha Lounge by Buddha Bar will be the relaxed lunch and dinner spot, serving lighter fare and craft cocktails. For a more lavish dinner, look to Parisa, which will feature Persian cuisine. And hidden within Parisa, 20-seat Innocents is a speakeasy-style bar and restaurant that will have a range of live music—from West African drumming to jazz. Finally, Origin is a cocktail and hookah lounge, open afternoon to late-night.

Contact Indagare or your Trip Designer to learn more about Fairmont Tazi Palace and traveling to Morocco with Indagare.

This article was created in partnership with Fairmont Tazi Palace and published by Indagare Travel.