Just Back from: A Safari with Impact in Zimbabwe

I hadn’t expected the sound of hippos grazing in the night to be quite so relaxing. But as I shut off the lights of my tent, their grunts and groans began lulling me right to sleep. It was my first night in Zimbabwe’s Hwange National Park, and I was here “on assignment” with Colin Heinrich, director of Indagare Impact.

As the hippos meandered noisily past my tent, I thought about what lay ahead of us on this eight-day adventure: The next morning we were meeting with Dr. Andrew Loveridge, a Zimbabwean professor who heads the Trans-Kalahari Predator Program from Oxford University’s Wildlife Conservation Research Unit (WildCRU). The following day, we were heading to visit the Long Shields Lion Guardian program, one of WildCRU’s initiatives on the ground. Since 2021, Indagare has been donating one percent of its annual revenue to fund the program, and at long last, we were able to visit in person. After our time with the Long Shields team, we were going to leave Hwange for Mana Pools, on the Zambezi River, to learn more about a large-scale rewilding project taking place there. Along the way, we would stay at five tented camps from Wilderness and Great Plains Conservation, two of Indagare’s top safari partners.

And while all safaris are amazing (seriously, not hyperbole. Seeing wildlife in its natural habitat at such close range is one of life’s most enriching experiences), what made this trip so special was its focus on the three pillars of Indagare’s Impact program: conservation, community and culture.

Contact Indagare or your Trip Designer for assistance planning a safari to Zimbabwe or elsewhere. Our team can match you with the camps and lodges that are right for you, as well as advise on seasonality in destinations across Africa. 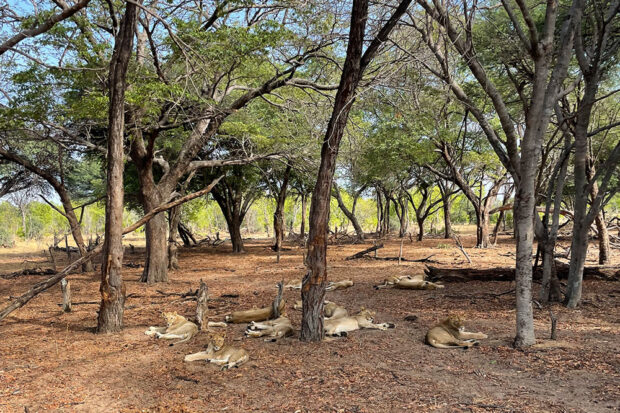 A pride of lions napping in Hwange. Photo by Peter Schlesinger, courtesy Indagare

Hwange is one of the oldest national parks in Africa, protected since 1928. On the fringes of the Kalahari desert, its plains, scrub forests and watering pans are home to a staggering amount of wildlife. Around 45,000 elephants—more than half of Zimbabwe’s entire population and roughly 10 percent of all of Africa’s—live here. So, too, do wild dogs, hyena, leopard, cheetah, buffalo and various species of antelope.

Lions have thrived in Hwange well. (The infamous hunting of Cecil the Lion occurred here in 2015.) There are dozens of prides within the park, earning it designation as a Lion Conservation Unit from the International Union for Conservation of Nature. Yet as lions have thrived in Hwange, it’s more complicated outside the park’s borders, where they attack cattle—a critical source of income for local communities. That’s where the Long Shield Lion Guardians come in. The initiative works to protect lions, locals and their livestock on the outskirts of the park.

That sense of community involvement is a crucial way to ensure conservation is long-lasting. “Our voice is part of the conversation now,” said our guide, Peter, as he drove us from the tented camp to meet with the Long Shields that morning. Slowly but steadily, he explained, Zimbabweans are finding that their world-renowned wildlife is a blessing, not a curse. And they’re taking action to ensure long-term coexistence is possible. 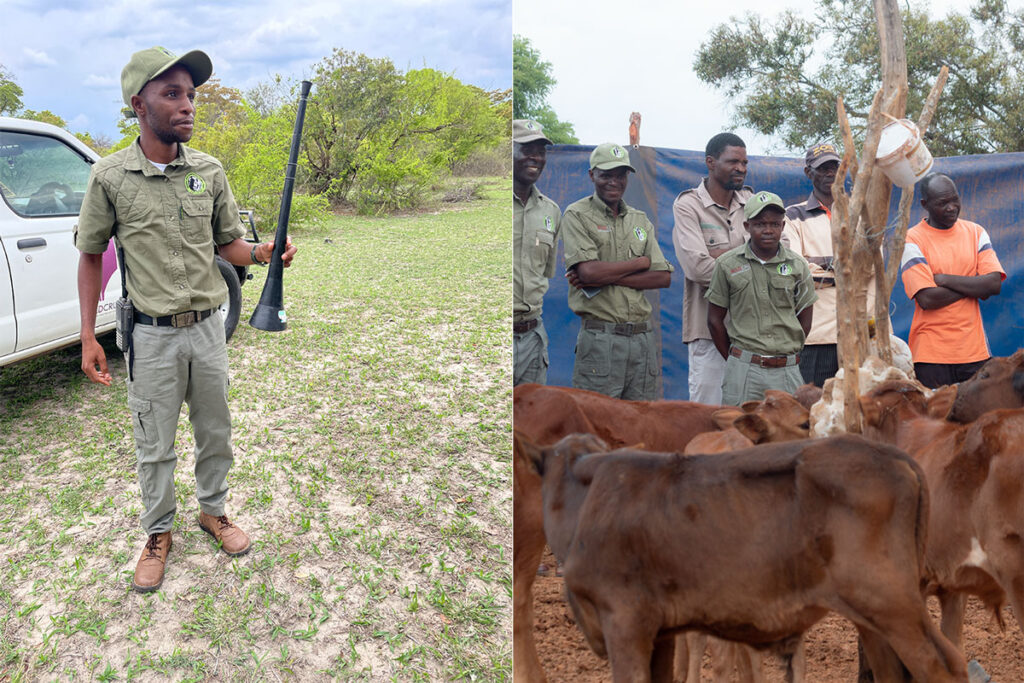 We saw this shift firsthand when visiting with Leo, both at the Long Shields headquarters within the park and two of the nearby villages to learn more about their work. We watched as the local farmers—all women—welcomed the Guardians with song and dance, and we spoke with them about their experiences. Until recently, lions had been a constant threat, regularly attacking their cattle. Meanwhile, soil degradation meant poor crop yields year after year. Thanks to the Long Shields program and its mobile corrals, they could keep their livestock safe and fertilize multiple fields a year, significantly increasing their crops. And whereas in years past, they would resort to violence when dealing with lions, they now had access to a troop of Long Shields lion guardians, who patrol the area and, peacefully, using vuzelas, herd the predators back towards the national park.

“The Lion Guardians are part of the community,” said Leo. “We’ve selected them with traditional leadership assistance as key individuals who can represent their communities and also protect them.” This grassroots organization, funded almost entirely by Indagare’s Impact fund, directly benefits the lives of more than one thousand Zimbabweans. 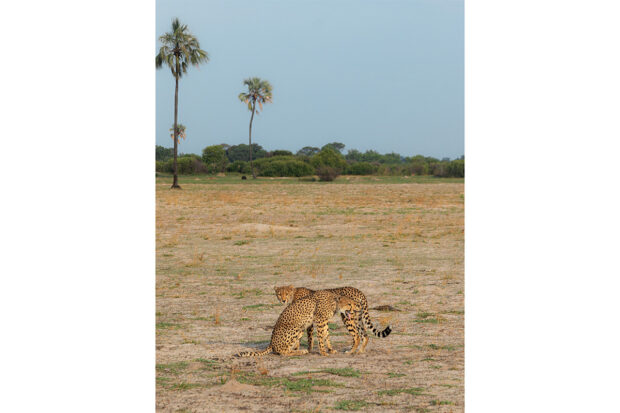 After several days in Hwange, we headed towards the Mana Pools region on Zimbabwe’s border with Zambia. On the southern bank of the Zambezi River, with the mountains of Zambia’s Zambezi Escarpment on the other side, it’s one of Africa’s most scenic safari destinations.

Here, too, the relationship between humans and nature is a complex one. Like in many national parks around the world, people lived in the Mana Pools area long before it fell under federal protection in 1984. During one game drive in the area, we stopped at an ancient baobab tree that had been hollowed out at its base: remnants of someone’s hiding place from lions in centuries past, explained Brad, our guide. And until the 1950s, annual flooding along this part of the Zambezi River was a fact of life. The construction of the Kariba Dam in 1959 changed all that—regulating water flow downstream and creating the world’s largest man-made reservoir upstream. In total, the dam and reservoir led to forced relocation for more than 60,000 civilians. 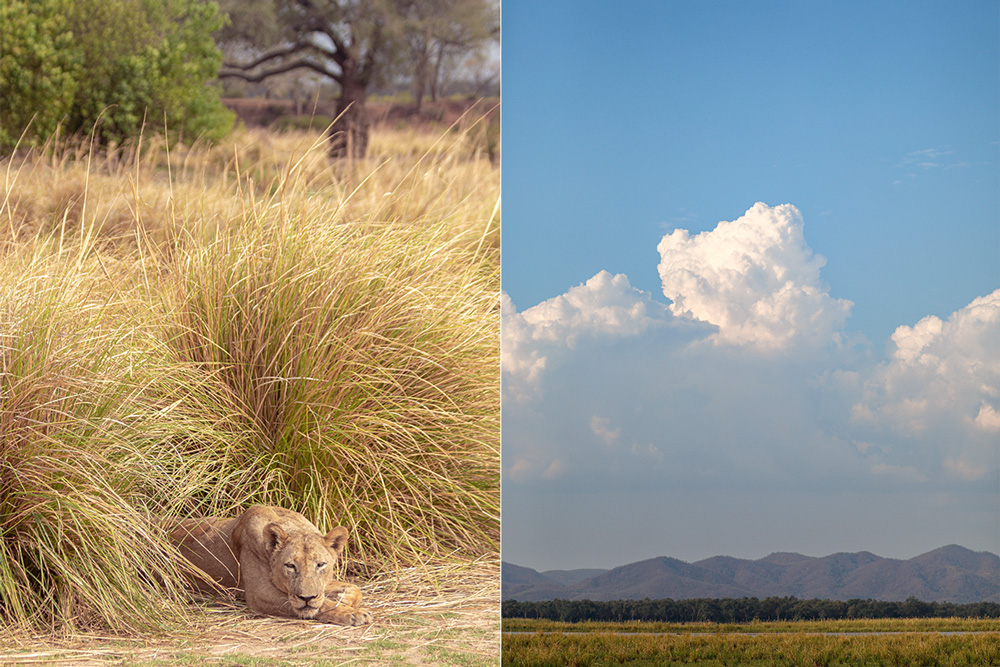 A lioness napping and views from the Ruckomechi Concession of Mana Pools National Park. Photos by Colin Heinrich 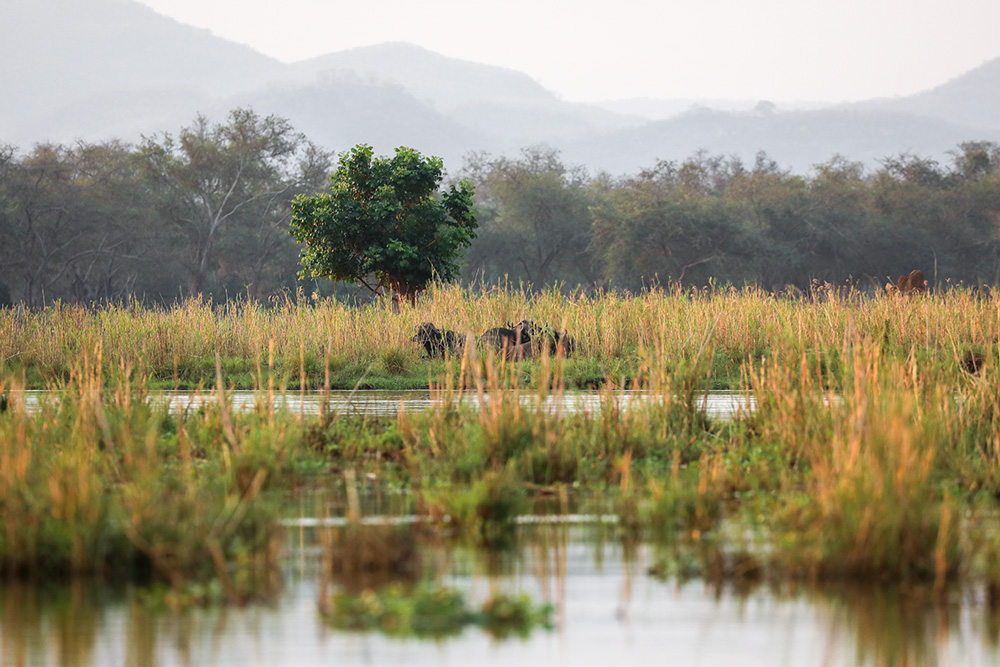 Buffalo along the Zambezi. Photo by Colin Heinrich, courtesy Indagare

Nowadays, the park and its private concessions provide safe havens for one of the greatest concentrations of hippopotamuses and crocodiles anywhere—plus lions, zebras, leopards, wild dogs, elephants and buffalo.

For our first two nights in the region, we stayed at Wilderness concessions within the park, exploring the riverbanks, forests and plains at Chikwenya Camp and Ruckomechi Camp. Here, we were treated to up-close encounters with lions and elephants (one of whom interrupted our lunch), and spent our game drives discussing Zimbabwe history.

Our last two nights of the trip were spent at Tembo Plains Camp, from Great Plains Conservation. It’s in the Sapi Preserve, a concession adjacent to the national park that, until Great Plains took it over several years ago, had been a hunting preserve. Initially, that had brought significant sums of money to the area, much of which went directly back to conservation. But wild animals are smarter than we give them credit: over the years, much of the resident wildlife left Sapi, heading for the gunshot-free expanses of Mana Pools instead. During our game drives here, animals were noticeably more skittish around our vehicles than they’d been at other camps. Every year though, explained our guide Brad, they’re getting more habituated to the idea that human presence isn’t synonymous with hunting. Gradually, animals that had retreated towards Mana Pools have returned. On top of that, Great Plains Conservation is in the midst of a rewilding project on a massive scale, attempting to bring up to 3,000 animals back to the preserve. Already, more than a hundred elephants have relocated here as part of Rewild Zambezi. 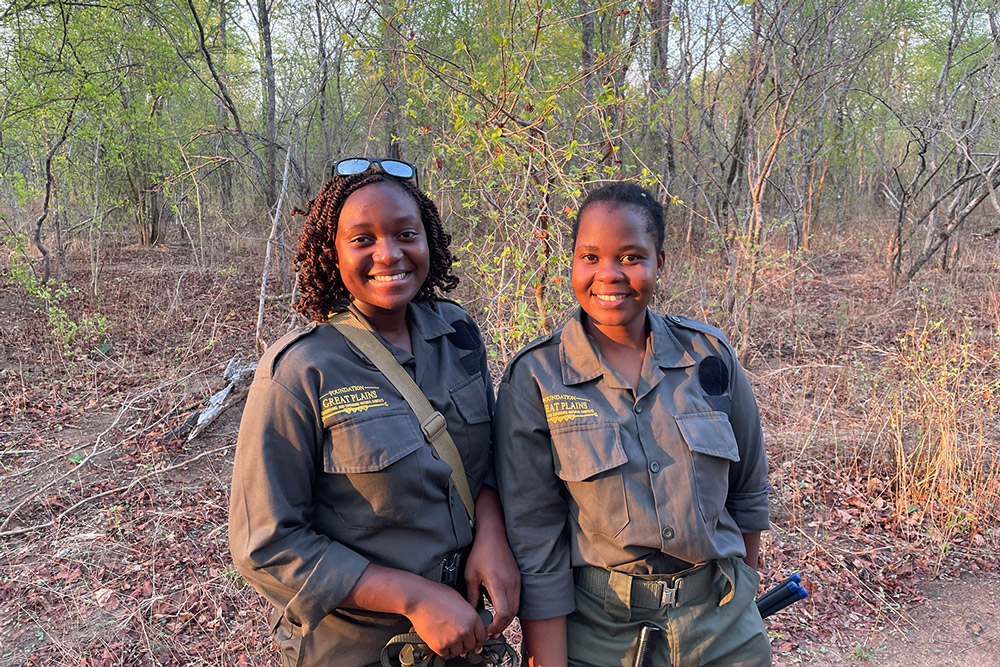 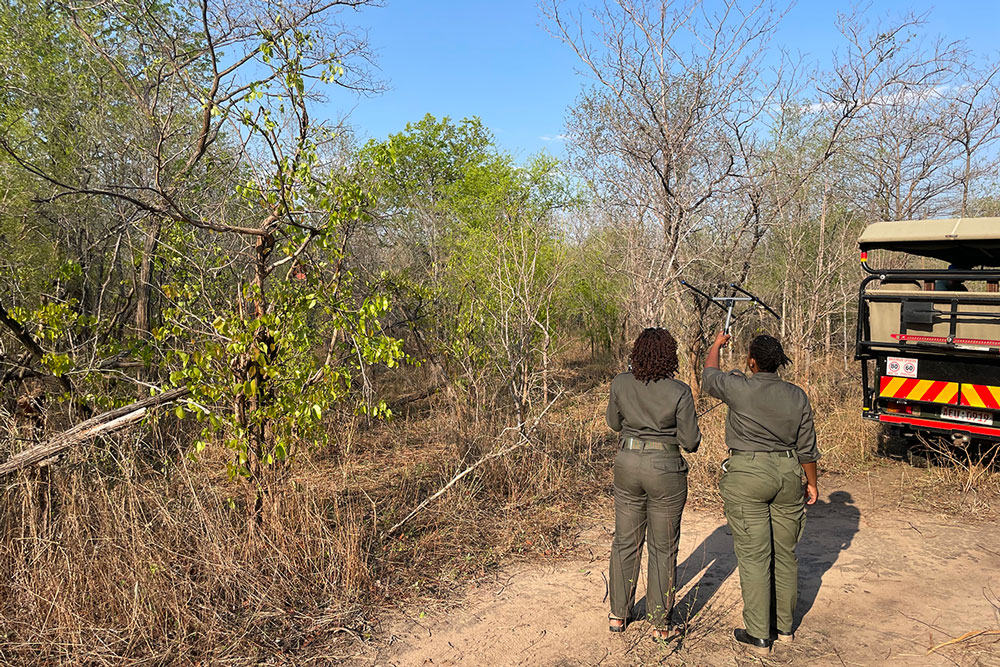 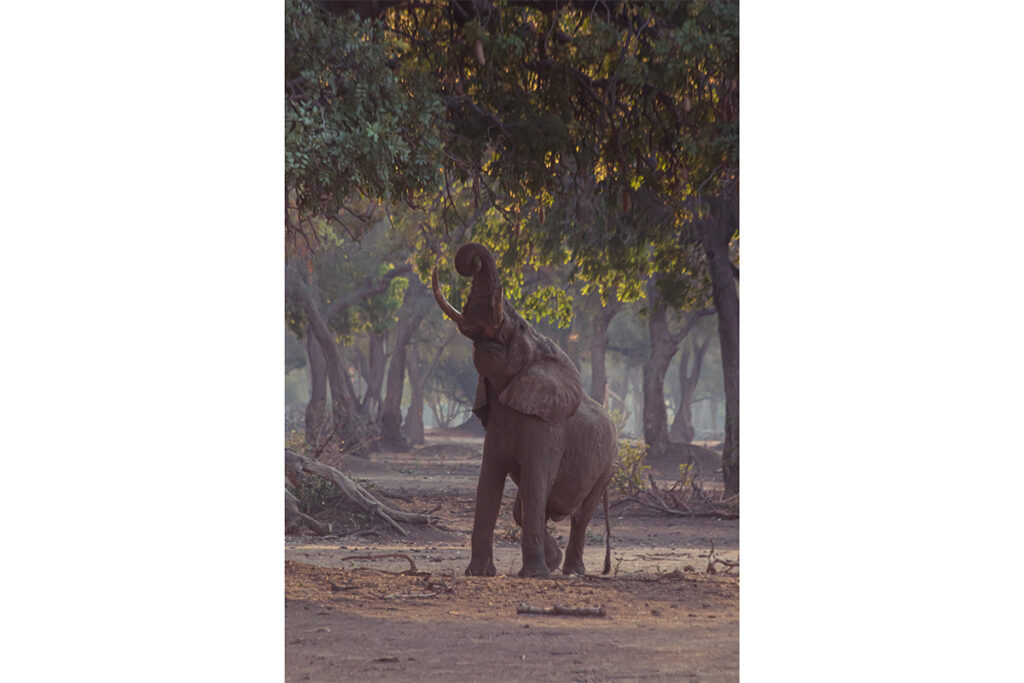 For one of our afternoon game drives at Tembo Plains, we joined two newly hired rangers from the Rewild Project. Together, we walked through the bush following the footsteps of a herd of elephants, found using tracking devices that help the Rewild team monitor how resident herds and newly transported herds move around the area. We also saw the site for the project’s new headquarters within the concession. By May, more than 50 rangers and researchers, many of them women, will be here onsite.

They’ll arrive at a pivotal moment for Rewild Zambezi. When Mana Pools park was formed, black rhinos numbered more than 500, but heavy poaching brought that number down to fewer than 10 within a decade. Those few remaining rhinos were moved to other parks for safekeeping. Now, along with more elephants and impala, Rewild Zambezi is hoping to reintroduce rhinoceroses to the region.

On our drive back to camp that evening, Brad summed our entire trip up: “Everyone else is perfecting tourism,” he said. “We’re perfecting conservation.”

In June 2023, Indagare is hosting an Impact Journey to Zimbabwe to witness Rewild Zambezi in action. Learn more here. 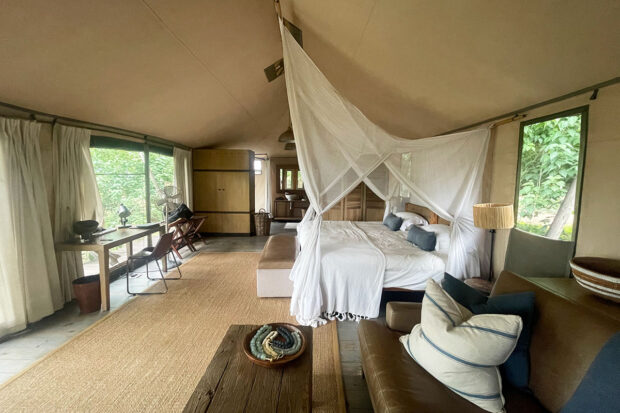 JOHANNESBURG, SOUTH AFRICA
The Saxon Hotel, Villas & Spa, an oasis of a resort with expansive grounds and soothing, earth-toned interiors.

HWANGE NATIONAL PARK, ZIMBABWE
Little Makalolo and Linkwasha, tented camps from Wilderness on a private concession within the park.

Contact Indagare or your Trip Designer for assistance planning a safari to Zimbabwe or elsewhere. Our safari experts can match you with the camps and lodges that are right for you, as well as advise on seasonality in destinations across Africa.