Why Go Now: Mongolia | Just Back From an Insider Journey

For nearly two weeks in August, I had the pleasure of accompanying 10 intrepid travelers on our Indagare Insider Journey: Wild Mongolia. We were all drawn to this landlocked country known as the “land of the eternal blue sky” for different reasons. Many of us came to traverse the remote, vast landscapes unlike anywhere else in the world (Mongolia is the world’s least-densely populated country and 18th largest by land). One of us indulged in his lifelong passion for paleontology. Another sought to discover the ancient roots of shamanism and Tengrism, an ethnic Turko-Mongolic religion centered around the Sky God Tengri, a personification of the universe. Others hoped to expand their historical knowledge of Chinggis Khan, known as “maker of the modern world.” The main draw for me, like many, was to experience Mongolia’s unique and traditional nomadic culture, still common practice for roughly 32 percent of the country’s population of 3.2 million.

“Traveling in a way that connects me to people as they live their lives is motivating, as it fills the need of intellectual curiosity and context for our own lives, as well. Indagare’s insider journeys have provided that for me and my wife over many years, and we are most thankful.” —Indagare member Joseph Ojile

Contact your Trip Designer or Indagare, if you are not yet a member, to start planning a trip to Mongolia. Our team can match you with the accommodations, reservations and activities that are right for you. And learn more about upcoming Insider Journeys here.

Getting There and Around

Up to 1.3 million live in the capital city of Ulaanbaatar, where most of us arrived via a connection in Seoul. The Shangri-La Ulaanbaatar became our home base at the beginning, middle and end of this 10-night expedition. We spent the first two nights shaking off our jetlag in Ulaanbaatar, three nights at Indagare-Adored property Three Camel Lodge in the Gobi Desert, one night in UB, three nights at a private wilderness camp in the Western Altai Mountains and one final night in UB. Our internal flights required us to travel lightly, due to luggage weight limits, so in between the Gobi Desert and the Altai Mountains, we exchanged our gear for the new climate and stored our belongings and new treasures: handmade felt pieces made by the camel herder’s wife, sweaters from Gobi Cashmere and unique shagai souvenirs from Tsagaan Alt Wool Store.

THE EXPANSE OF TIME

In the Gobi Desert, one cannot help but feel incredibly young in the presence of ancient dinosaur bones. Over 270 million years ago, the Mongolian land mass formed and eventually this stable and quiet land became home to the world’s third-largest desert. We explored some of the most famous paleontological sites in the world, including Tugrugyn Shiree and Alag Teeg, where the famous fighting dinosaurs and the armored dinosaurs were found. With the guidance of Batsukh, an expert paleontologist from a premier lab in Ulaanbaatar, we hiked the desert’s white sandstone escarpments on our own dinosaur safari, trying our hardest to spot fragments of fossils dating back 65 to 70 million years amid hundreds of other rock varieties. Anand, our one-of-a-kind guide during our entire Insider Journey, managed to find one, and we took turns holding this fragile fossil in our palms. 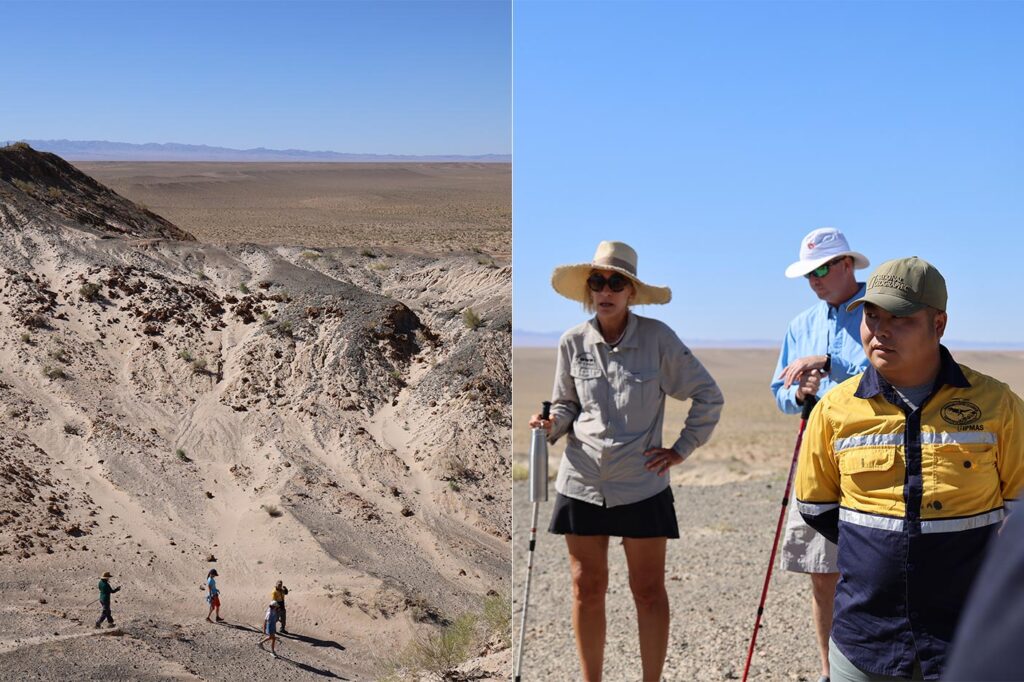 On the hunt for dinosaur fossils. Photos by Diana Li, courtesy Indagare 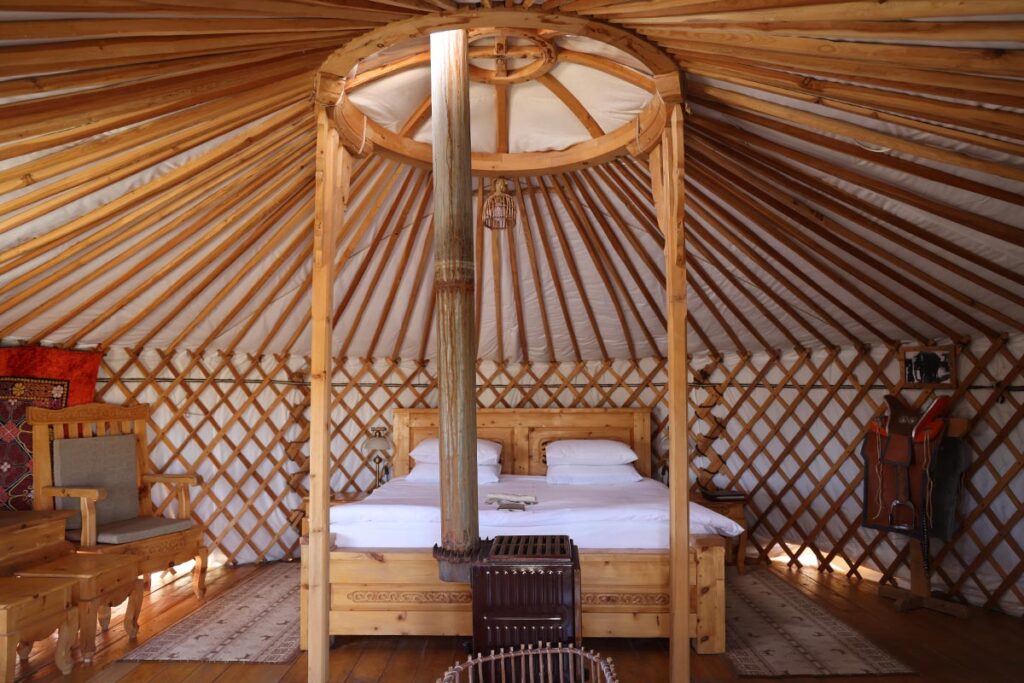 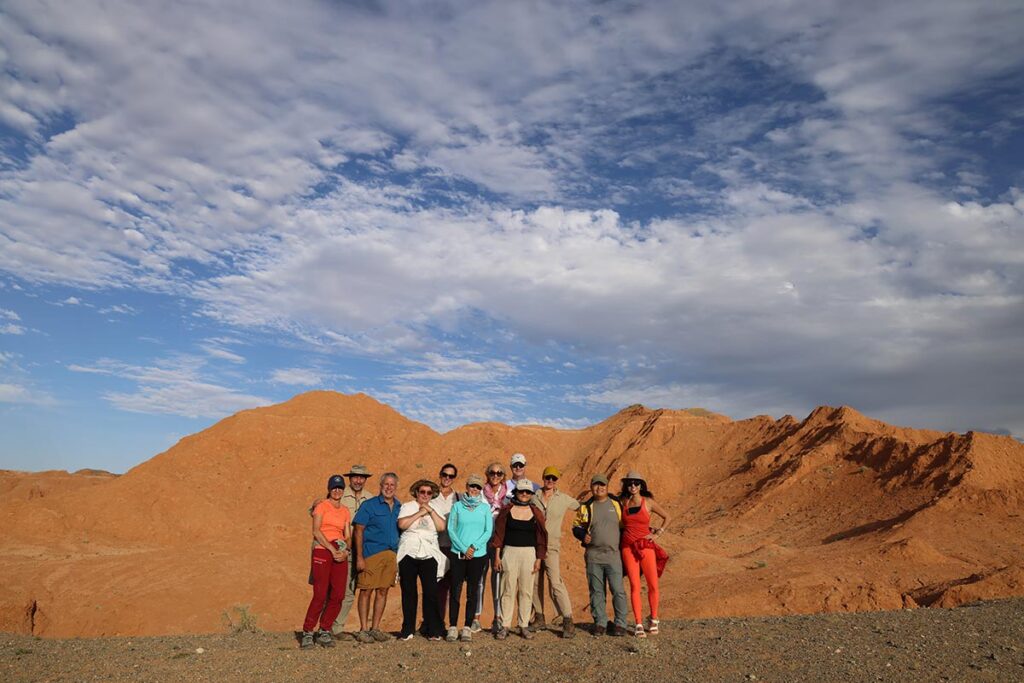 Sunset hike at the Flaming Cliffs in the Gobi Desert. Courtesy Indagare 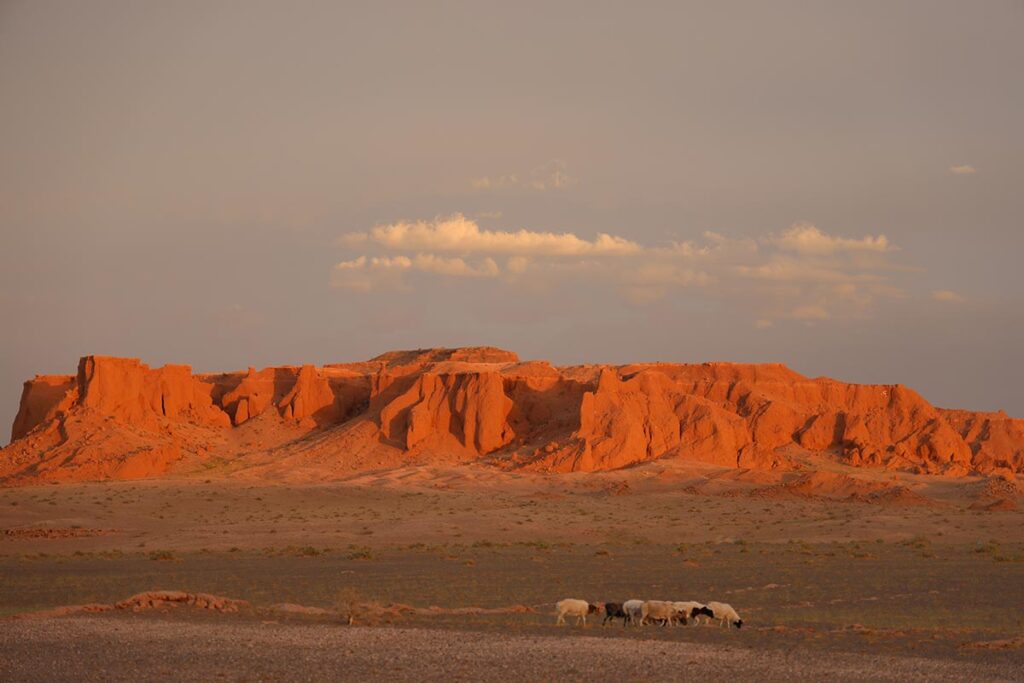 Flaming Cliffs in the Gobi Desert, where dinosaur eggs were discovered a century ago. Photo by Diana Li, courtesy Indagare

Later that day, we hiked the Flaming Cliffs, where the 80 million-year-old Protoceratops dinosaur eggs were first found 100 years ago. As we enjoyed our Mongolian vodka sundowners, we observed nature’s entertainment at its best: herds of sheep and goat grazing across the grasslands beneath the cliffs just as dark storm clouds rolled in, contrasting with the glowing red cliffs. Throughout our days in the Gobi, we also  encountered ancient petroglyphs dating back more than 5,000 to 9,000 years at Havtsgait Valley, where we hiked to the mountaintop site of rock engravings left by early Gobi settlers. And later at the beautiful Three Camel Lodge, with its expansive views (12 miles to the horizon), our group chose their own adventures: horseback riding, biking, archery lessons, or building a traditional ger (“home” in Mongolian). 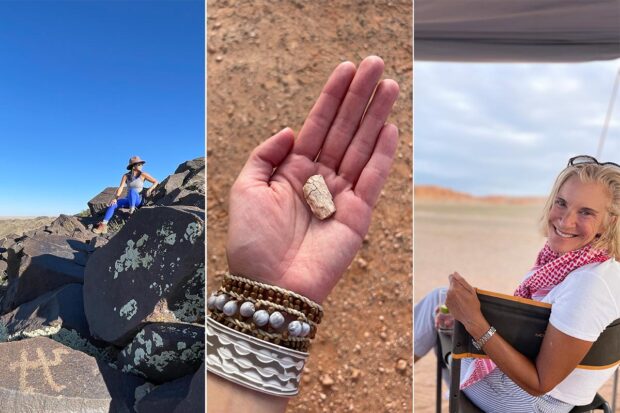 THE NOMADIC CULTURE AND TRADITIONS 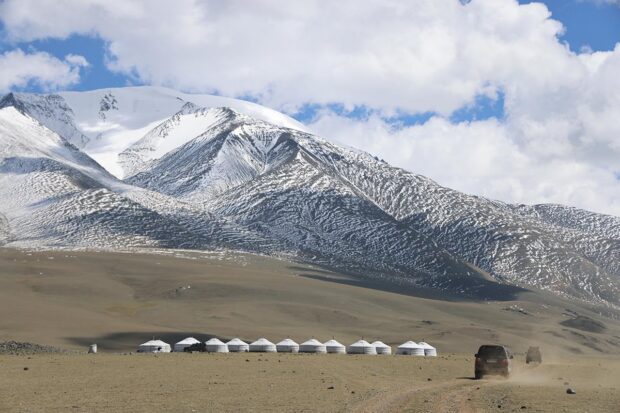 At the base of Tsambagarav Mountain. Photo by Diana Li, courtesy Indagare

After less than a three-hour flight from Ulaanbaatar, for the second leg of our trip, we arrived at Ulgii, the capital of the Bayan-Ulgii Aimag province, located in the extreme west of Mongolia. From there, during the second snowfall one week shy of September, we drove two-and-a-half hours, partially off-road on rocky terrain to our wilderness camp at the base of the freshly snow-capped Tsambagarav Mountain. Deep in the Altai Mountains between Kazakhstan, China, Russia and Mongolia, we settled into cozy yurts and nomadic lifestyle, living minimally with limited hot water and electricity. Without distractions of wifi, we spent much of our time gathered around the warm stove, sharing stories as we indulged in chef Aika’s delicious soul food, including Kazakh besbarmak and hand-pulled Uighur noodles.

Over the next three days, we not only bonded with each other, but we spent time with two Kazakh families, who welcomed us warmly. In fact, when many nomadic families tend to livestock faraway, they’ll leave their yurts unlocked and tables filled with a spread of curds for wanderers in need. As most of these nomadic families migrate for the winter shortly after the first snowfall, we met both families just before their yurts would soon be taken down and packed into three large carts.

On our first morning, we visited Chaimurat, the sole three-time winner of the Golden Eagle Festival and winner of one of this year’s horse races at the Naadam Festival. Inside his family’s yurt, we drank milk tea his wife made us and snacked on curds as Chai played the dombra, a two-string lute. (Every Kazakh family must have a son who plays this guitar to continue the cultural melody.) Outside, we watched Chai dress in his eagle hunter regalia and practice training his eagle upon horseback to hunt live bait dragged across the steppe. Chai is also training his son as an eagle hunter to continue this ancient Kazakh tradition. 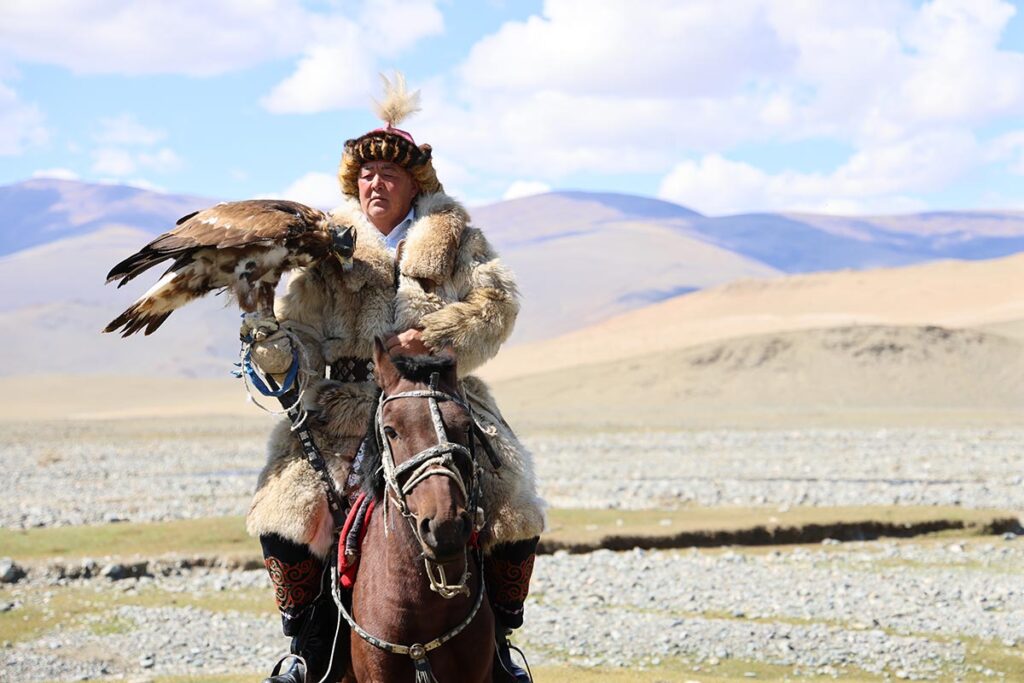 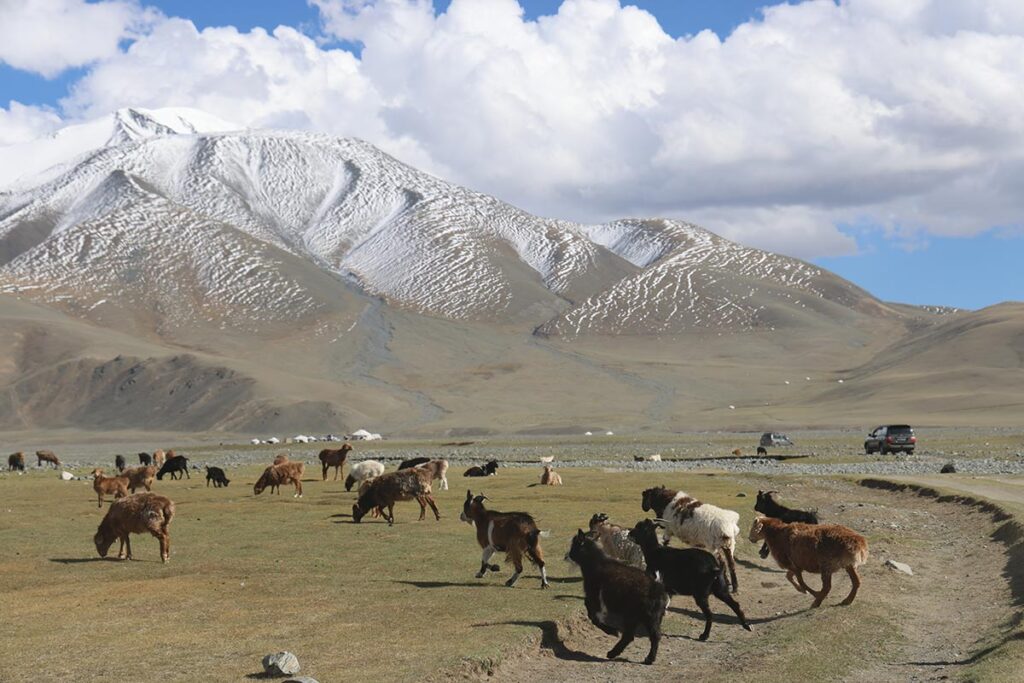 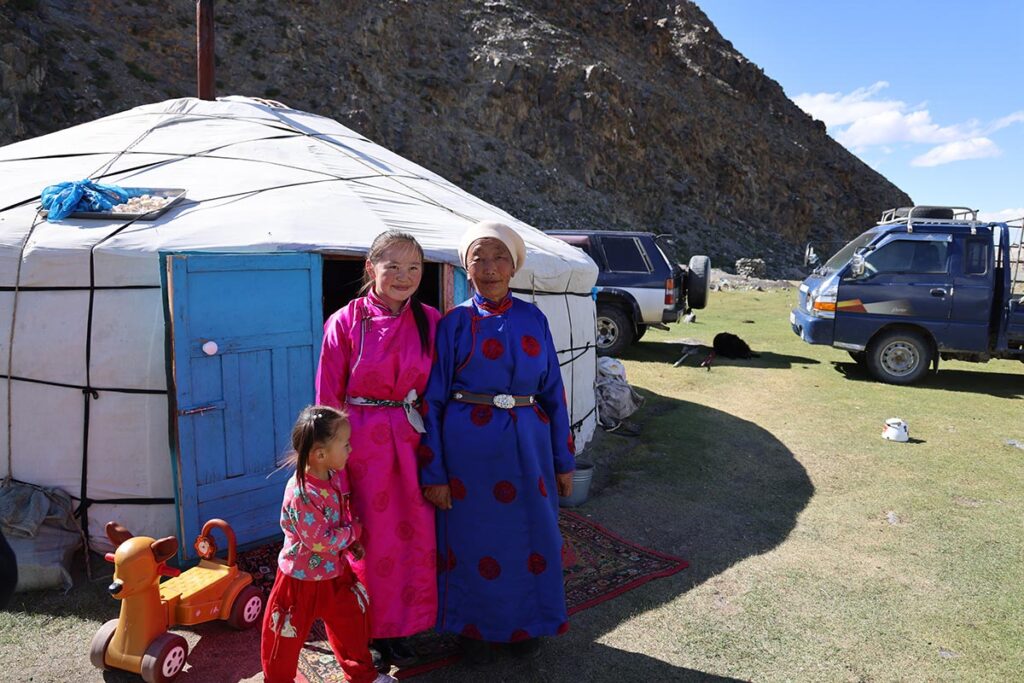 “Mongolia is one of those places, like Bhutan, Iceland or the Serengeti, where time stops and you feel a rapidly disappearing world is still alive and present. Supporting… is a small way of ensuring those intangible treasures stay with us for a couple of generations more.”—Indagare member Roberta Garza Medina 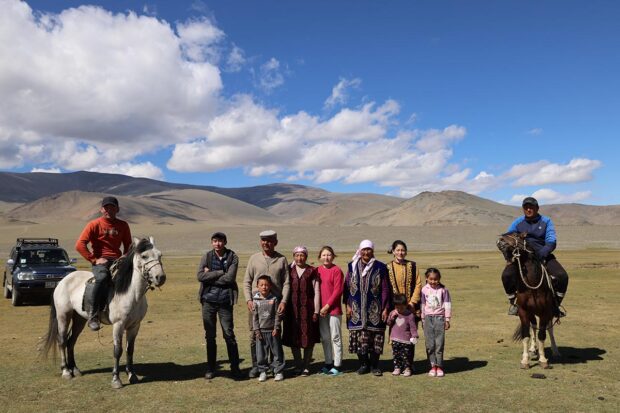 On our second morning, we visited a beautiful multi-generational equestrian family who showed us traditional Kazakh games such as kokbar (tug-of-war on horseback), blacksmithing and saddle making. Entering into each of their two yurts, we were mesmerized by the vibrant patterns and colors of the shyrdak, stitched-felt floor coverings, and tuzkeez, traditional wall hangings, both of which take months to create by hand. As the women tried teaching us how to hand embroider, we appreciated the skillful level of craftsmanship by Kazakh women. After months of work, the bottoms of the tuzkeez are always left unfinished—because if they are completed, life as we know it might end. 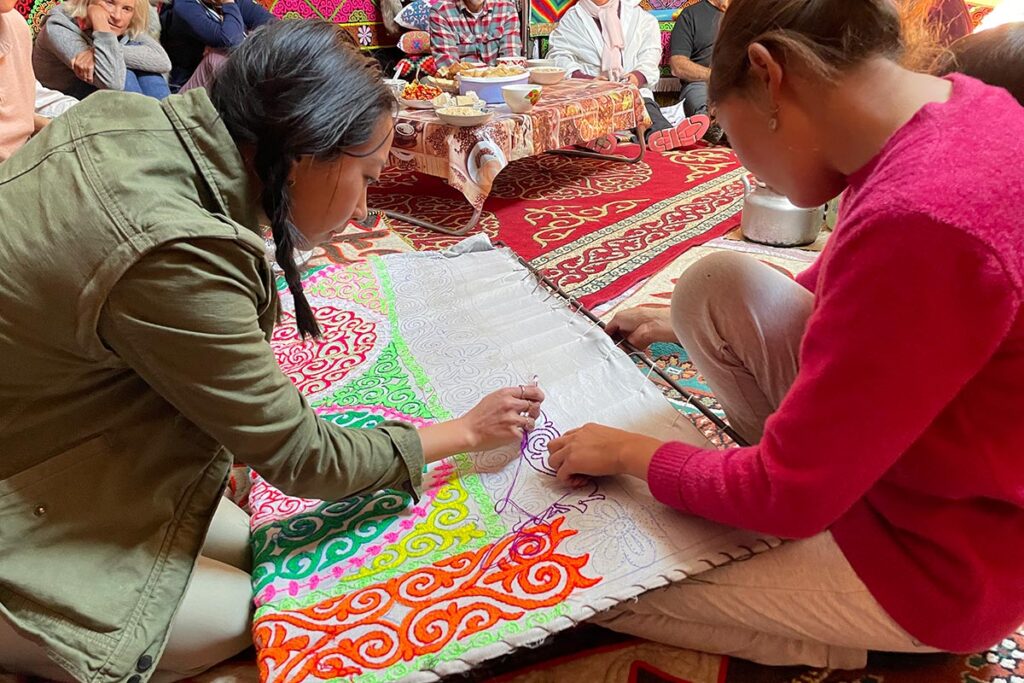 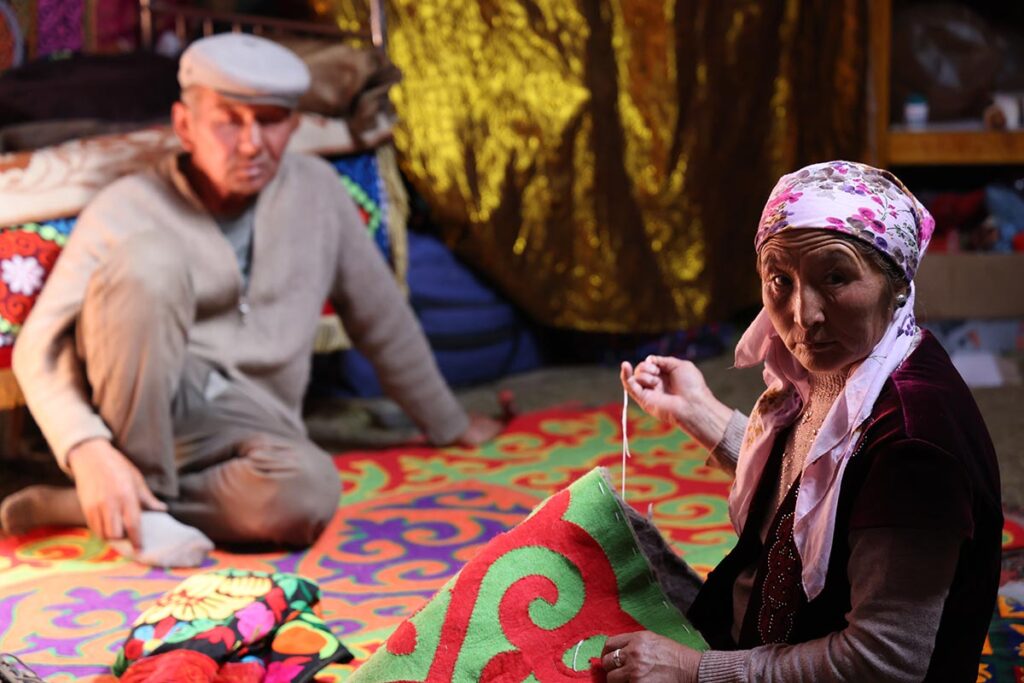 A Kazakh wife and stitching a felted mattress and rug with her husband. Photo by Diana Li, courtesy Indagare

As we waved goodbye, I worried that this nomadic way of life may be in danger. The Mongolian government is trying hard to keep nomadic tradition alive through various initiatives, subsidies and providing livestock, but many factors will determine Mongolia’s nomadic future.

HOW YOU TRAVEL MATTERS

The herding industry in the Gobi is being threatened by the mining industry, and thousands of animals are being replaced by thousands of trucks shipping minerals to China. Climate change has contributed to the devastating dzuds (droughts), between 1999 to 2002, during which 21.5 million animals died and 180,000 nomads moved to Ulaanbaatar in search of urban opportunities. 2009 to 2010 was Mongolia’s most catastrophic dzud killing 23 percent of all livestock in the nation. The New York Times reported that the 2009 degradation of grasslands “may lead to the end of the Mongolian traditional way of animal husbandry as we know it, that at one time was the very core of the entire nomadic civilization.” And it wasn’t until the very last day of our journey that we finally found Mongolia’s most notorious beverage, airag, fermented mare’s milk (believed to have medicinal benefits), as virtually no one had any because it was too dry. 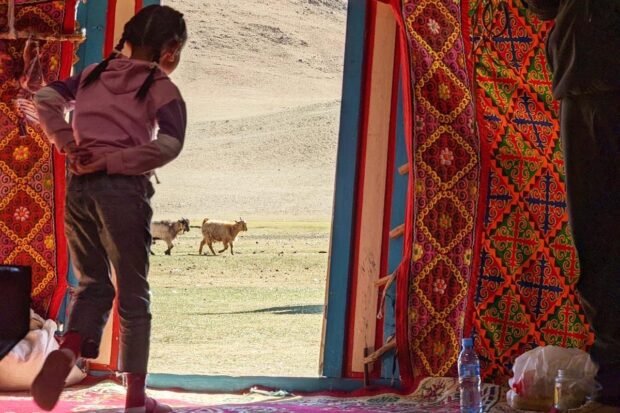 During an eye-opening visit to the Wildlife Science and Conservation Center of Mongolia, an organization dedicated to preserving wildlife and habitat through research, conservation and public education, Dr. Nyambayar Batbayar gave our group a special lecture, teaching us that one of the biggest problems in the region is lack of water resources. We also learned how WSCC invests in local community engagement in the Altai Mountains to protect both the golden eagle population and cultural traditions. They encourage each hunter to register a Golden Eagle passport, so roughly 200 eagles can be monitored and released back into the wild in two to three years.

“We had a private presentation of the Wildlife Science and Conservation Center of Mongolia when we were in Ulaanbaatar. It touched me deeply that they are giving everything to preserve their legends: The Golden Eagles as well as those very special cranes that fly over the Himalayas twice a year to breed in Mongolia, where they lack security to breed. For me, it is the very best to donate to organizations that are right in the country and who carry in their heart just one thing: To care for the beautiful beings in their country to survive. How you treat our great mother matters!”—Indagare member Daniela Pfefferkorn

At the close of our Insider Journey, our group collectively decided to contribute to WSCC’s Golden Eagle conservation project. We saw first-hand how our travel truly mattered. We came to Mongolia to experience the remote landscapes, ancient history, nomadic cultures and much more, and we left the country having made a small but positive—and lasting impact—on this precious place that needs to be protected for many more generations to come.

Contact your Trip Designer or Indagare, if you are not yet a member, to start planning a trip to Mongolia. Our team can match you with the accommodations, reservations and activities that are right for you. And learn more about upcoming Insider Journeys here. 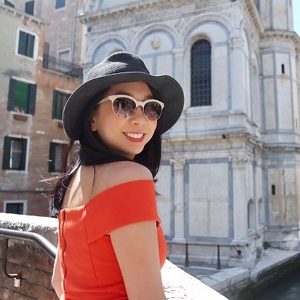 “Mongolia is one of those places, like Bhutan, Iceland or the Serengeti, where time stops and you feel a rapidly disappearing world is still alive and present. Supporting… is a small way of ensuring those intangible treasures stay with us for a couple of generations more.”