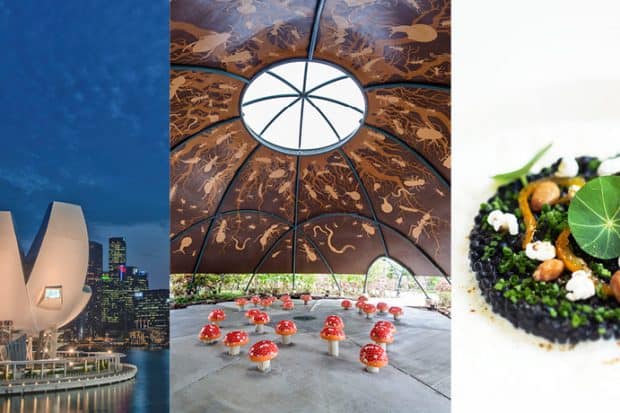 From left: Courtesy Arts Science Museum, Gardens by the Bay, The Kitchen at Bacchanalia

Too far away for a weekend jaunt and yet too limited of a destination for making a trip halfway across the world, Singapore has long been overlooked by sophisticated travelers in lieu of more traditionally touristed neighbors like Thailand and Cambodia. Unlike Hong Kong, a natural transit hub, Singapore often falls as an after-thought to a larger trip to Australia or Indonesia, or as an add-on to an extensive Southeast Asian itinerary. But what was once a quintessential layover city—one that was previously seen as a place to spend no more than 36 hours—Singapore is emerging as a destination in its own right thanks to exciting architecture, newly minted Michelin-starred restaurants and a host of innovative technologies. Singapore’s identity is blossoming as a design-forward, modern metropolis that also boasts a rich, historical legacy as a British colony. With all that there is to see, do, eat and experience in Singapore these days, Singapore Airlines’ 18-hour nonstop flight from Newark to Changi couldn’t resume soon enough; discontinued in 2013, it will once again be the longest flight in the world when it relaunches in 2018.

While Singapore doesn’t have the audacity of Dubai or share China’s unabashed love of anything big and extravagant, it is nevertheless an ultra-modern, high-tech city that pushes boundaries in architecture and design. Take its iconic skyline, which, though only a few years old, is a daring, futuristic matrix. Highlights include the striking Marina Bay Sands and its boat-shaped sky park, the innovative Helix Bridge, which is shaped like a strand of DNA and the alien-looking Super Trees of Gardens by the Bay.

The latest bold idea involves building the tallest indoor waterfall in Singapore’s Changi Airport, which has been named World’s Best Airport by World Airport Awards four years in a row thanks to amenities like a 24-hour movie theater and day spa. Called Rain Vortex, the waterfall will cascade down nine stories from a glass dome. The science behind it is impressive; water design firm WET (also responsible for the mega-fountains at the Bellagio and Burj Khalifa) constructed the waterfall so that it would not create a cloud mist, which would have filled the airport with hot, humid air. The aquatic marvel will debut in 2018 inside an even more anticipated structure: the Jewel terminal. Designed by Moshe Safdie, the same architect behind Marina Bay Sands and the lotus-shaped ArtScience Museum, the five-story, greenhouse-like airport section will open in early 2019.

Singapore’s renown as a dining destination, the Michelin Guide only arrived here in 2016. Right off the bat, 29 establishments were awarded stars, including Joel Robuchon, the lone three-star recipient, and a street food vendor from one of Singapore’s famed hawker centers that was given one. The price for Hong Kong Soya Sauce Chicken Rice & Noodle’s signature dish is $1.85, making it the world’s cheapest Michelin-starred meal.

Even without accolades, Singapore’s dining scene is thriving. Aussie newcomers Burnt Ends and Cheek by Jowl offer a taste of meat-heavy dishes from Down Under. Japanese, Chinese, French and Italian cuisines have a strong foothold in the city’s culinary landscape, but restaurants like the avant-garde Tippling Club and innovative The Kitchen at Bacchanalia, choose to identify not by geographical influence but rather by their style.

Not everything new in Singapore, however, sits in a shiny glass and steel structure. The National Gallery is housed in two national monuments, the former Supreme Court Building and City Hall. Opened in 2015, the museum features the world’s largest collection of Singaporean and Southeast Asian art. Don’t miss the museum’s hip rooftop bar, Aura, where visitors are treated to a beautiful view of the Marina’s electric skyline.

Singapore’s love for high-tech design has influenced more than just machinery and industry. The trendy Haji Lane, a hipster enclave tucked away in Kampong Glam, the Arab neighborhood, is home to Selfie Coffee, a café that imprints your face onto your latté. Upon arrival, patrons are invited to take a selfie and then a 3D-printing machine emblazons their likeness onto their foamy beverage.

Philippe Starck made his foray into Singapore with the short-lived M Social, which has since been taken over by JW Marriott and will re-launch as the 634-room South Beach in December. Downtown, the historic Raffles Hotel is set to embark on a major renovation in 2017, when it will close its doors to fully update the property. Two blocks away, The Capitol Kempinski Hotel is set to open any day, and promises to give Fullerton Bay a run for its money as the chicest boutique property in Singapore.