A gorgeously renovated hotel ushers in a new era for Paris’s Left Bank. Local Mara Hoberman gives the inside scoop.

When the Hôtel Lutetia reopened in 2018 on Paris’s Left Bank, following a painstaking renovation and restoration that kept it shuttered for more than four years, locals were delighted to see the beloved institution returned to its original splendor. Since 1910, the property has been a neighborhood mainstay on the Rive Gauche and a haunt for artists and intellectuals, including Ernest Hemingway, André Gide, Samuel Beckett, James Joyce, Pablo Picasso, Henri Matisse and Josephine Baker, who were all regulars. And now, the lavish property is drawing a new generation of luminaries to the area, who are bringing exciting new developments with them. 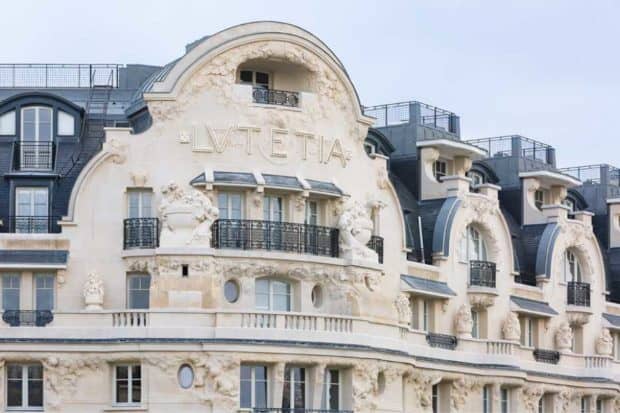 The Lutetia has kept its iconic Art Deco design while undergoing significant structural improvements and cosmetic upgrades. The lobby lounge, jazz bar, brasserie and guest rooms have been enlarged and brightened with oversized windows. Public and private areas have been redecorated with chic modernist furnishings. Among the most exciting innovations is the Akasha Holistic Wellbeing Center, a 7,500-square-foot spa clad entirely in Italian white marble, including the 55-foot-long sky-lit indoor pool. Indeed, incorporating natural elements— light and greenery—was a top priority for French architect Jean-Michel Wilmotte, who was in charge of the hotel’s makeover and added glass and plants throughout. A grand salon formerly used for private events has been transformed into a verdant interior courtyard where guests can sip cocktails or enjoy an alfresco meal. The airy, all-day lobby restaurant, Le Saint-Germain, is flooded with light, thanks to a large skylight that has been painted in bright translucent tones by local artist Fabrice Hyber. Here, guests can enjoy afternoon tea and seasonal fare like stracciatella with heirloom tomatoes and strawberries and tuna tartar with avocado and ponzu dressing.

In its new incarnation, the Lutetia is in the running to receive the prestigious Palace Hotel rating from the French government. If it achieves this coveted status (a property must be open for at least six months before becoming eligible), it will be the first—and only—Rive Gauche hotel to do so. While aiming for the same standard of excellence as its ten Palace confrères across the river—including icons like Le Bristol Paris, Four Seasons George V, Le Meurice and more—the Lutetia remains true to its roots. Neither trendy nor froufrou, it is refreshingly restrained and modern, with no Empire-style furniture or Philippe Starck design in sight. Furnishings are characterized by clean lines, geometric shapes and sumptuous materials, such as polished eucalyptus and white Carrara marble (400 tons were used). Handsome but not ostentatious, the new decorative elements complement the original Art Deco flourishes, which include impressive mosaics, floral moldings and intricate frescoes. Although luxury touches abound—the duplex penthouse suite on the seventh floor has a private roof garden with 360-degree views over Paris—the vibe is more discreet than that of many of the Right Bank Palaces.

While the Rive Droite has long been the land of trendy eateries and buzzy nightlife—with new hot spots popping up seemingly overnight in boho neighborhoods like the Marais, Oberkampf and Belleville—the Rive Gauche is typically celebrated for its classic Parisian charm. According to the Lutetia’s chief concierge, Bastien Lalanne, the hotel’s style reflects the “esprit du Rive Gauche,” which he defines as more authentic in terms of local culture, food and history. Among Lalanne’s favorite institutions are classics like the Musée Rodin and the Musée Maillol. But he also regularly sends clients to the new Monnaie de Paris, where contemporary art is displayed in the former Paris mint. And while a coffee en terrasse at Café de Flore, a stroll through the streets of the Latin Quarter and visits to the Eiffel Tower and the Musée d’Orsay are definitely Left Bank musts, there are fresh places to try as well, like restaurateur David Lanher’s neo-bistro, Racines des Prés. In fact, a recent flurry of restaurant openings on the south side of the Seine is helping to reinvent this area as a nouvelle foodie destination.

Opened in August 2018, the Beaupassage is a ritzy urban renewal project that has reinvented a charming pedestrian street in Saint-Germain-des-Prés as a gourmet food court. The architecture of existing buildings on Rue Grenelle (just a few blocks from the Hôtel Lutetia), including an 18th-century convent, has been retrofitted to accommodate upscale restaurants helmed by Michelin-starred chefs Yannick Alléno, Anne-Sophie Pic, Olivier Bellin and Thierry Marx. In addition to this impressive cluster of hot spots, Beaupassage is home to world-class artisanal-food purveyors. For the finest French cheeses, head to Nicole Barthélémy’s eponymous fromagerie. Japanese coffee impresario Junichi Yamaguchi’s brûlerie sells beans and freshly brewed café to go, and carnivores won’t want to miss Alexandre Polmard’s boucherie. A feast for the eyes as well, Beaupassage showcases site-specific artworks by Fabrice Hyber, Stefan Rinck, Eva Jospin and Marc Vellay. 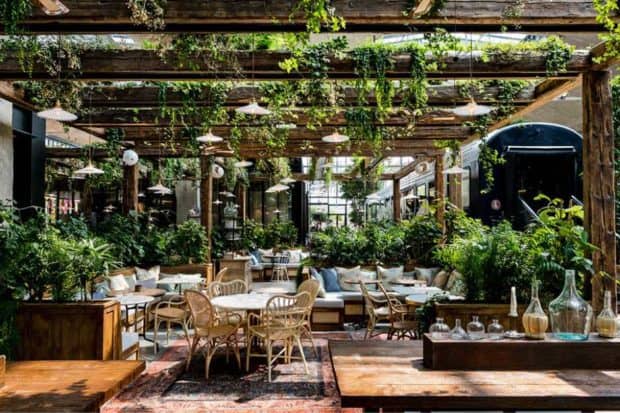 Farther afield, another foodie mecca has recently drawn hipsters to a formerly sleepy quarter in the 13th arrondissement. Located in Station F (a massive start-up hub housed in a refurbished 1920s shipping depot called Halle Freyssinet), La Felicità is the first Left Bank outpost of the Big Mamma group, whose wildly popular restaurants include East Mamma, in Bastille; Ober Mamma, in Oberkampf; Mamma Primi, in Batignolles; Big Love Caffè, in the Marais; Pizzeria Popolare, in Bourse; and Pink Mamma, in Pigalle. Opened this past May in a sprawling, 50,000-square-foot space decorated with old train cars, painted balloons and plenty of greenery, La Felicità is the largest restaurant in Europe (it seats over 1,000 people) and has five kitchens, an alfresco beer garden, two cocktail bars, a seasonal food market and a roving ice-cream cart. The cuisine is mostly Italian inspired—think truffle and vongole Neapolitan pizzas and caprese salads—although there is an American-style burger shack among the pizza and pasta restaurants. It also offers an enormous terrace, DJ sets, live concerts, rotating art exhibitions, film screenings and a full roster of activities for children. Vive la Rive Gauche!

Contact Indagare for assistance planning a vacation to Paris, including accommodations at the Hotel Lutetia, reservations at the best new restaurants and more in left bank Paris.

“While the Rive Droite has long been the land of trendy eateries and buzzy nightlife—with new hot spots popping up seemingly overnight in boho neighborhoods like the Marais, Oberkampf and Belleville—the Rive Gauche is typically celebrated for its classic Parisian charm. ”