When the effects of climate change and an energy crisis converge, conversations about the weather are much more than idle chit chat. Such is the case in France these days, where record-breaking heat waves hit the country hard this summer, and autumn—so far—has felt more like spring. While locals and tourists alike have undoubtedly been enjoying the unseasonably warm temperatures, headlines have been dominated by tips on energy-efficient ways to keep cozy during the coming winter.France being France, fashion is playing a crucial role in helping to manage the energy crisis. The office dress code for Winter 2022-23, as spotted on President Emmanuel Macron and several of his ministers as early as September, is… turtlenecks. (Macron favors a black wool col roulé under his black suit.) Although the French government has not officially endorsed this cold-weather trend, it has imposed certain restrictions on heating in order to cut the country’s energy use by 10 percent. Chillier offices may well lead to an uptick in sales of sweaters, scarves and, yes, turtlenecks.

Speaking of what to wear, Fall Fashion Week provided a much-needed diversion from hard news. Runway shows held in various locations across Paris brought a burst of fresh air to the city after a particularly hot and sticky summer. Among the most notable presentations were Stella McCartney’s runway show at the Pompidou Center and Dries Van Noten’s three-day exhibition and full sensory experience at the abandoned Hôtel de Guise in the seventh arrondissement. Now that the fashion shows have finished, art exhibitions are taking over the city. This past week saw the inaugural edition of Paris+ by Art Basel. The fair, which replaced FIAC on the fall art calendar, generated a whole lot of buzz, and many Paris museums have timed their best shows to coincide with its launch. Always fashionable, arty and tasty, Paris has a lot to offer this season. Here’s a quick look at what on and what’s new in Paris:

Contact your Indagare Trip Designer or Indagare, if you are not yet a member, to start planning a trip to Paris. Our team can match you with the accommodations, reservations and activities that are right for you.

What to See & Do: The Best Art Shows to See Now

The must-see exhibition of the fall season is a twofer at the Fondation Louis Vuitton. Taking over the Frank Gehry-designed building in the Bois de Boulogne, two shows featuring large-scale abstracted landscapes by American painter Joan Mitchell are on view until early 2023. The upper floors of the FLV are dedicated to Monet / Mitchell, which juxtaposes colorful paysages by Mitchell and French Impressionist Claude Monet. Striking parallels are made between the brushwork and palettes of these two masters, who happened to live (at different times) in the same small town along the Seine. The Foundation’s lower level, meanwhile, houses a retrospective of Mitchell’s work, which traveled from San Francisco to Baltimore before landing in Paris.

Another great American painter, Alice Neel, is also having her moment in Paris. Those who caught Neel’s recent retrospective in New York, San Francisco or Bilbao, can rest assured that the Pompidou Center’s survey focuses on different works that show the artist’s engagement with political causes of her time. Divided into two thematic sections (class struggle and the struggle of the sexes), Alice Neel: Un regard engagé features paintings made between the 1920s and the artist’s death in 1984. Also on display at the Grand Palais Éphémère by the Eiffel Tower, is work by Louis Vuitton-afiliated artists such as Jeff Koons, Yayoi Kusama and paintings by Richard Prince, along with Cindy Sherman’s travel trunk and a panda sculpture by Takashi Murakami.

Bringing together art and fashion, the exhibition Frida Kahlo, Beyond Appearances presents Kahlo from a new perspective—one that is much more profound than her public persona. Featuring 200 objects from the Casa Azul Frida Kahlo Museum, this exhibition presents personal effects, including the artist’s clothing, accessories, letters, cosmetics and medicine. Kahlo’s status as a style icon is also celebrated here, as the exhibition reveals her influence on the likes of Alexander McQueen, Jean Paul Gaultier and Karl Lagerfeld, among others.

And in case it wasn’t already obvious that women are being feted across Paris this fall, there is the exhibition, Parisiennes citoyennes ! Engagements pour l’émancipation des femmes (1789-2000) at the Carnavalet Museum. Through paintings, sculptures, photographs, films, archives, posters and documents, Parisian Women: The Fight For Emancipation (1789-2000 ) describes the passionate history of women’s liberation and feminist movements in France since the Revolution. 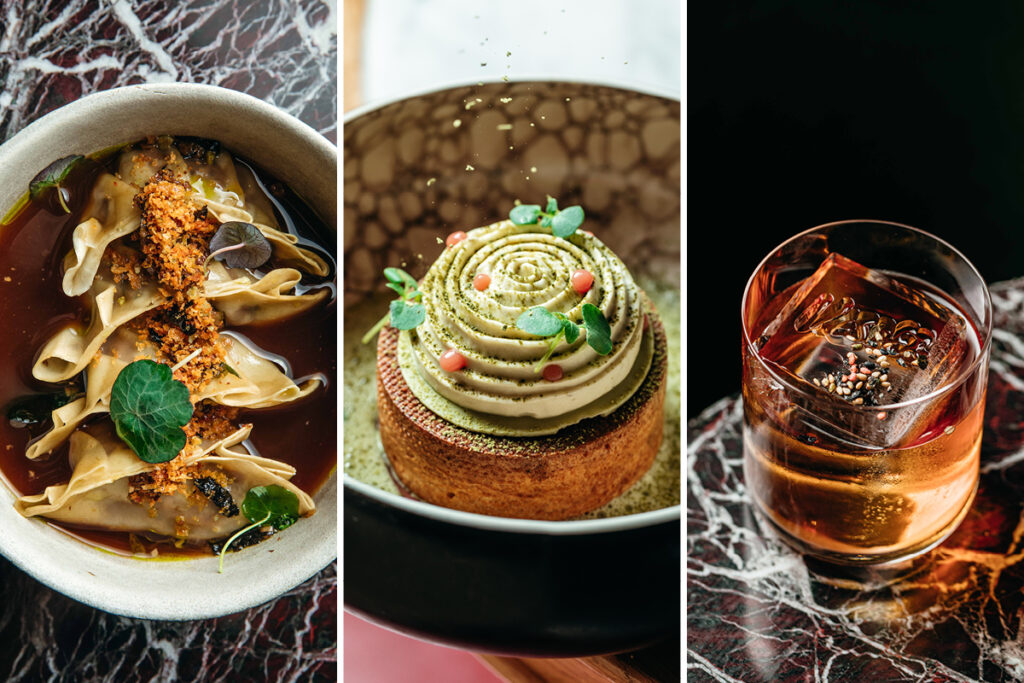 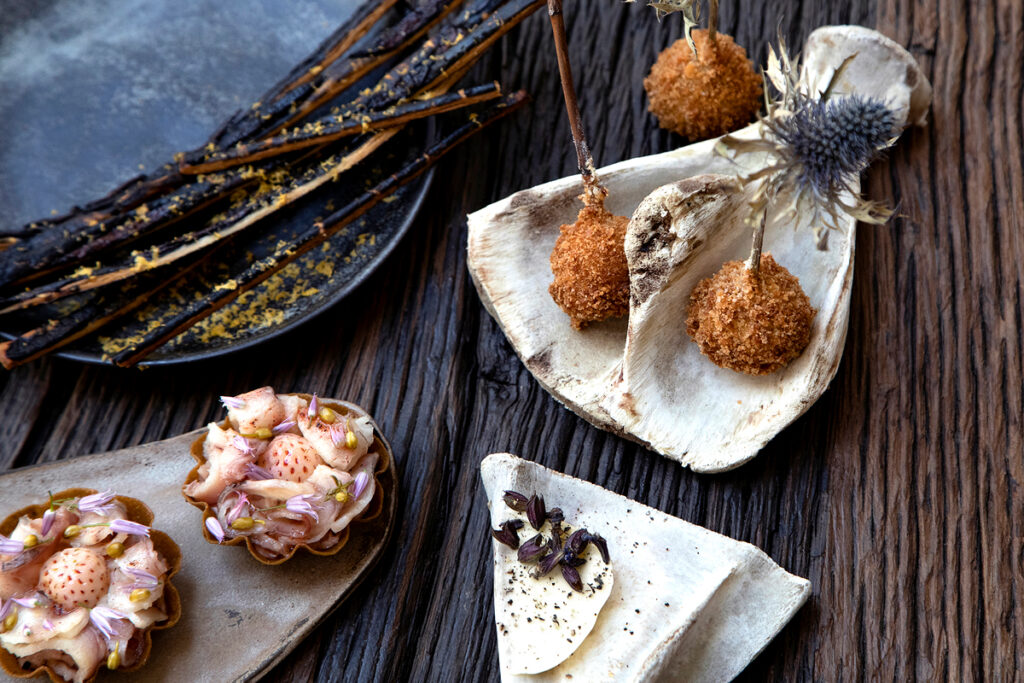 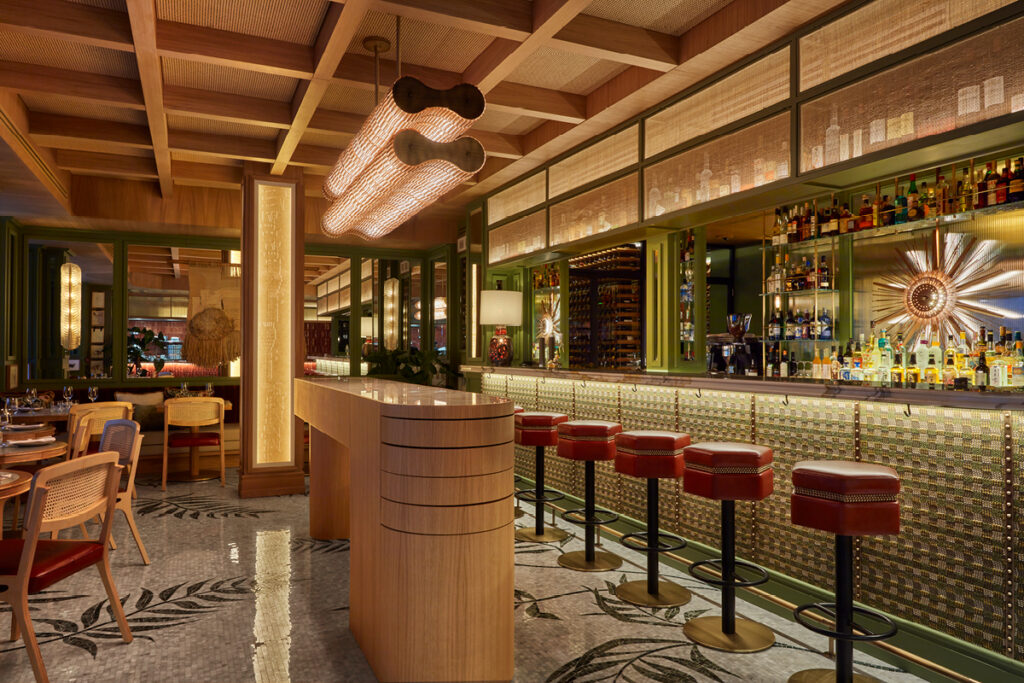 Since spring 2022, Vesper, in the seventh arrondissement, has been delighting Parisians with Nikkei cuisine—a delicious fusion of Japanese and Peruvian ingredients and cooking styles. Chef Lucas Felzine, formerly of Ze Kitchen Galerie, L’Arpège and le Shangri-la, has created a menu that artfully mixes sushi, sashimi and maki—with tacos and guacamole. The interior design by hip Spanish architect Lazaro Rosa Violan creates a glamorous and festive atmosphere in which to sip cocktails with eclectic ingredients that are a perfect match for Felzine’s hybrid cuisine.

It’s hard to say which is more delectable, the décor inside Le Tout-Paris (at Cheval Blanc) or the view from the balcony on the seventh floor of La Samaritaine. The brasserie’s playful red, yellow and blue decoration is the work of Peter Marino, and the bustling quai below offers even more local color. Whether you choose to sit inside or en terrasse, the menu classics such as langoustines with mayonnaise and steak tartar will hit the spot. In addition to lunch or dinner, Le Tout-Paris is a bonne adresse for a morning coffee, evening cocktail or Sunday brunch.

Also guaranteeing amazing views, Bonnie is situated on the 15th floor of a newly renovated building complex near Sully/Morland that includes an art gallery, upscale market and the new SO/Paris Hotel. The restaurant’s large glass windows let diners gaze out at the Seine, Ile Saint-Louis, the Panthéon, Notre-Dame and, in the distance, the Eiffel Tower, while they enjoy elegant comfort foods like roasted lobster, fried chicken with coleslaw or a veal chop with mashed potatoes. Before or after a meal, the cocktail bar one flight up offers a groovy 70s vibe with comfy couches, classic cocktails and, again, a stunning view.

Foodies in Paris and beyond are eagerly awaiting the opening of Geosmine, which will soon take over two stories on rue de la Folie Mericourt, in the trendy 11th arrondissement. Set to open this fall, Geosmine is the first solo project helmed by promising young chef, Maxime Bouttier, who trained at Le Pressoir d’Argent in Bordeaux and is known for his artistic and inventive culinary creations.

Where to Stay: Hotel News 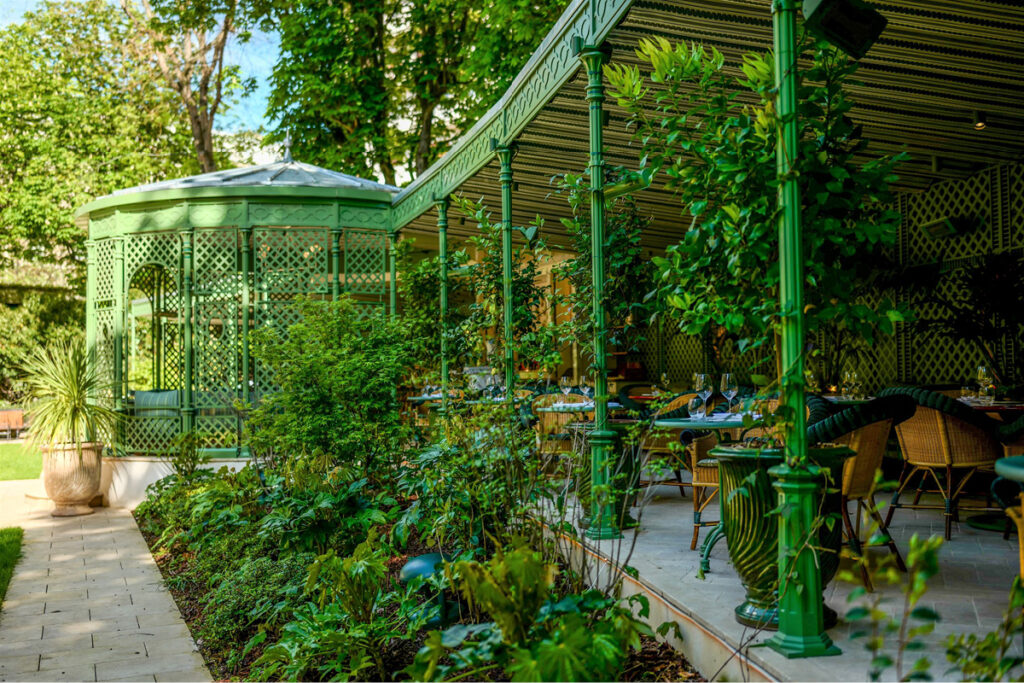 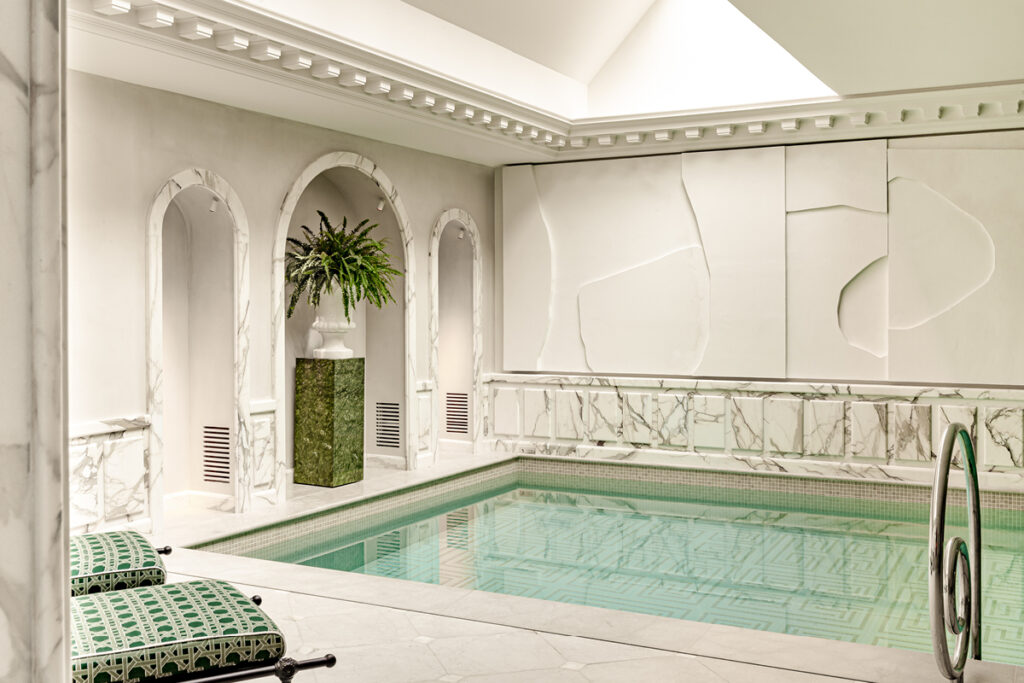 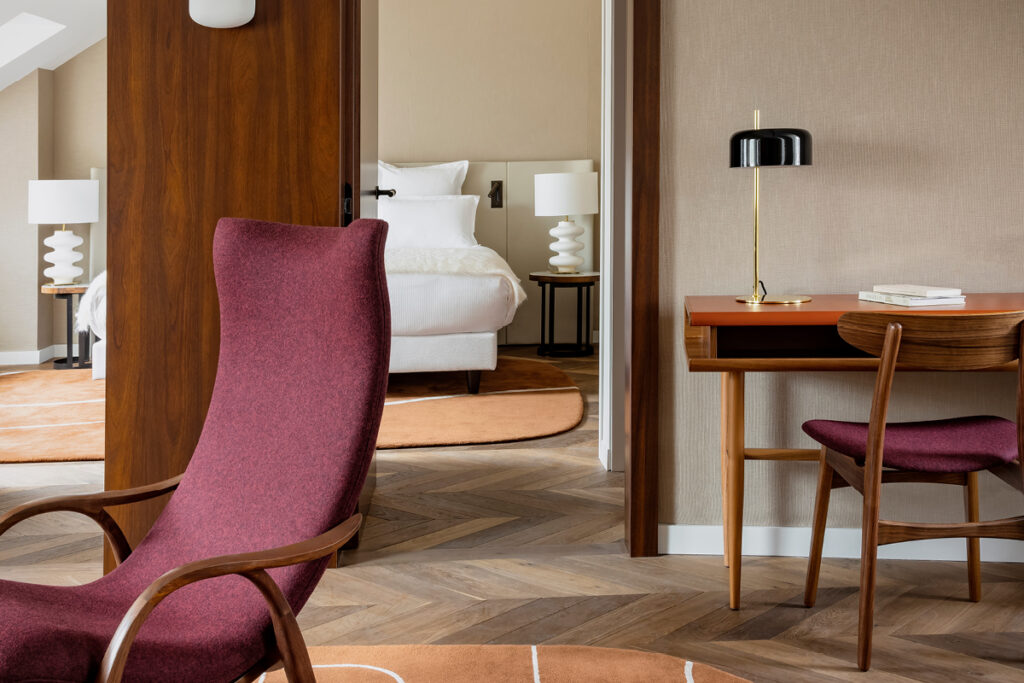 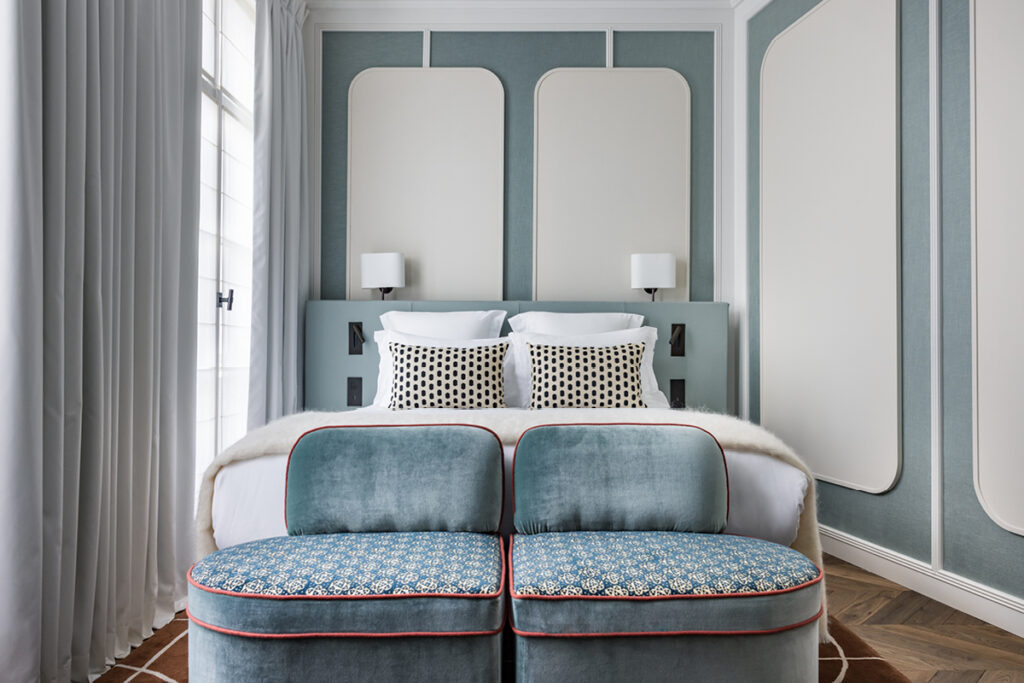 At Indagare Adored Le Bristol, say Bonjour to the new baby Birman cat-in-residence, Socrate. We bid a fond farewell to his father Fa-Raon, who has, sadly, retired from official duties. (When you do, visit the Gabriela Hearst pop-up at the hotel, closing November 5.)

For those who prefer a little Left Bank charm, the Pavillon Faubourg Saint Germain which opened April 2022, is a quintessential germanopratin address. Set between the Seine and Saint-Germain-des-Prés, the 17th-century building was once home to James Joyce. Two years of renovation have resulted in beautiful contemporary interiors designed by Didier Benderli, who is also responsible for the décor in the Right Bank gem, Le Pavillon de la Reine (on Place des Vosges). The in-house restaurant, Les Parisiens, is a stylish bistro with a seasonal menu. The bar, which is named for Joyce, has quickly become a neighborhood favorite for delicious original cocktails.

And at the Hôtel Le Grande Contrôle, inside the Estate of Versailles, guests have even more unique access to the royal Chateau than before. The hotel, which opened in June 2022 with 14 rooms and suites decorated in lavish florals and period furniture with marble fireplaces and claw-foot tubs, also features hotel staff in full period dress and private tours of the palace and gardens—and dinner is still a grand affair at Alain Ducasse’s Les Cent Marches. Madame du Barry lived at Versailles as mistress to King Louis XV and her restored apartments has reopened for private visits. Guests can also live like Marie Antoinette for a day, continue the royal treatment at the Valmont spa, go horseback riding on the site of future Olympic equestrian events in the Paris 2024 games, have a private visit to the Palace’s Central Library on the site of the signing of the treaty of Paris and more. Indagare can help arrange these and other special experiences during your stay.

Where to Shop: Best New Boutiques & A Ritz Paris Collection

Americans are shopping like mad in Paris right now, thanks to the strength of the dollar and the VAT refund, which has been abolished in the U.K. but not in Europe. Designer brands can be between 40 and 60 percent less in Paris than in the U.S., and they’ll find plenty of options.

On the luxe rue de Montaigne, where neighbors include Givenchy, Louis Vuitton and Dior, Simon Porte Jacquemus’s first Paris boutique opened during Fall Fashion Week. The French fashion darling’s creations—including his iconic royal blue hoodies—have been staples on the racks of hip boutiques like Opening Ceremony, in New York, and Dover Street Market, in London. The Paris store is designed to provide an immersive experience with ceramic sculptures by Mathilde Martin, irregular plaster racks inspired by the artwork of Alberto Giacometti and a giant popcorn machine setting a playful artsy mood. Alas, this inspired shopping experience is only temporary. Visit the “event store” before it closes in February 2023.

A stone’s throw from the flagship Lemaire store on rue de Poitou in the Marais, a new boutique at Place des Vosges focuses on the brand’s line of accessories. The “croissant bag,” a chic alternative to a fanny pack, is a cult classic.

Even if you’re not staying at Ritz Paris, it’s worth a trip to the hotel’s concept store for the new ready-to-wear capsule collection featuring the hotel’s iconic logo. The collection is a collaboration with American brand FRAME (an advocate of sustainable and fair clothing production) and features pieces for men, women, children and even dogs. Among the fun and stylish souvenirs are baseball caps, beanies, eye masks and silk pajamas all emblazoned with the Ritz logo and insignia. There’s also a new fall tea time at Salon Proust and the revamped Ritz Club & Spa, which reopened last month. New treatment rooms are named for icons like Ingrid Bergman and Zelda Fitzgerald.

Contact your Indagare Trip Designer or Indagare, if you are not yet a member, to start planning a trip to Paris. Our team can match you with the accommodations, reservations and activities that are right for you.