Why Travel to Paris This Fall 2019: The Best New Hotels, Restaurants, Shops and More

Autumn in Paris is all about art, as many of the city’s top museums and galleries put forth their best offerings during the fall season. Highlights this year include Francis Bacon at the Centre Pompidou, Toulouse-Lautrec at the Grand Palais, Degas at the Musée d’Orsay and a blockbuster Leonardo da Vinci show at the Louvre that is predicted to bring record-breaking crowds to the world’s most visited museum. (See below for Indagare’s full list of not-to-be-missed exhibits.)

In concert with the exciting fall culture calendar, new shops, restaurants and hotels on both sides of the Seine are offering art-related experiences this season. For those who have ever wondered what a masterpiece might smell like, famed French apothecary L’Officine Universelle Buly has created eight limited-edition scents named for highlights from the Louvre’s permanent collection. Perfumes, candles and soaps inspired by masterpieces including the Venus de Milo, Ingres’ Grande Odalisque and Gainsborough’s Conversation in a Park will be on sale at the brand’s temporary outpost in the Carousel du Louvre through the end of the year. Meanwhile, just across the rue de Rivoli, the chef d’oeuvre of the recently re-opened Hôtel de Louvre is a nearly 700-square-foot suite named for Impressionist painter Camille Pissaro, who painted almost a dozen paintings between 1897 and 1899 in his room at this historic hotel, overlooking the Opéra Garnier. 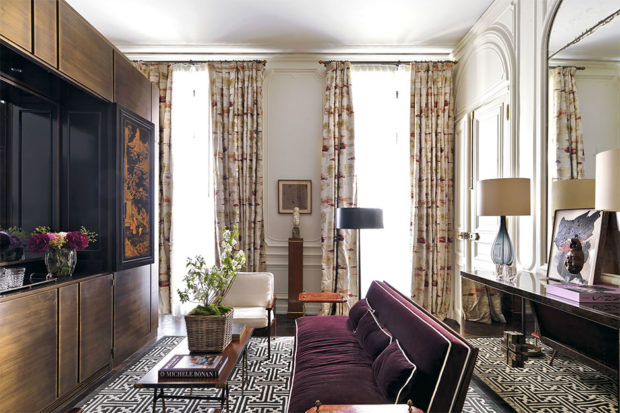 In other hotel news, the Paris branch of Italian luxury boutique hotel brand J.K. Place—whose locations in Florence, Capri and Rome are known for their glamorous yet homey vibe—is set to open this December. Situated on the Left Bank, just steps from the Musée d’Orsay and Les Invalides, this intimate hotel fits right in on the tony rue de Lille. A sneak peek at the signature suite revealed amazing antique finds from the Paris flea markets set against 19th-century moldings, large mirrors and custom-designed curtains by Italian upholstery house Dedar. The hotel’s restaurant will be the first European outpost for Casa Tua (with locations in Miami and Aspen), serving Northern Italian cuisine in a glass-roofed dining room. On the Right Bank, meanwhile, Les Jardins du Faubourg is a discreet new boutique property near the Champs-Élysées. Past the façade of a stately hôtel particulier, the interior garden is an exotic green oasis and home to the latest Bruno Doucet “La Regalade” restaurant. 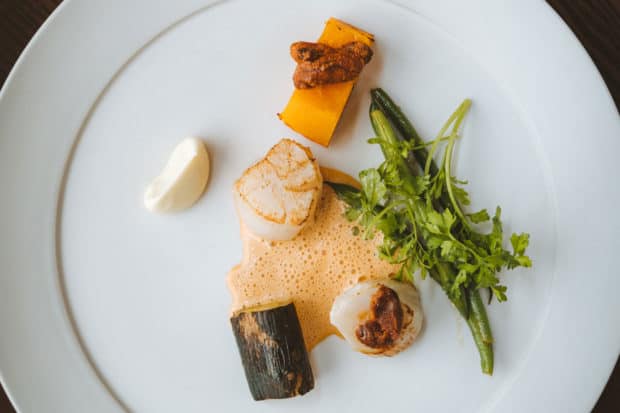 Culinary arts are also in fine form this fall, with highly anticipated Paris openings from several lauded chefs. Stéphanie Le Quellec, whose restaurant at Le Prince des Galles hotel was awarded two Michelin stars, will open La Scène this fall near Le Bristol hotel, serving sophisticated farm-to-table fare in an intimate dining room centered around an open kitchen. In November, Julien Boscus, a disciple of Pierre Gagnaire and Yannick Alléno whose Les Climats earned a Michelin star, is slated to open Origines, just off the Champs-Élysées. Meanwhile, over in the hipster enclave of the 11th arrondissement, the Japanese-born and French-trained chef Sota Atsumi has opened Maison in a charming two-story peaked-roof house on rue St. Hubert. Atsumi, who the New York Times recently praised for “reimagining classic French cuisine,” was known for turning Clown Bar into a super success with his elegant twists on hearty French classics. At Maison, Atsumi’s innovative hybrid dishes can be enjoyed in a more upscale setting. A newcomer to Paris, Coya is chef Sanjay Dwivedi’s latest outpost following successes in London, Dubai and Monaco. Part of the Left Bank’s Beaupassage development, Coya is housed in a church that has been decorated with Incan-inspired motifs. On the menu is an eclectic mix of flavors from South America, China and Japan, such as guacamole with shrimp chips, eggplant tacos and a signature Peruvian brandy cocktail, cut with lime juice and Angostura bitters. Another Left Bank newbie, Mordu, has taken over the northeast corner of the picturesque Marché Saint-Germain. Small plates and cocktails can be enjoyed indoors (at the wine bar or in the elegant dining room) or en terrasse under the stone arcades of the former covered market. 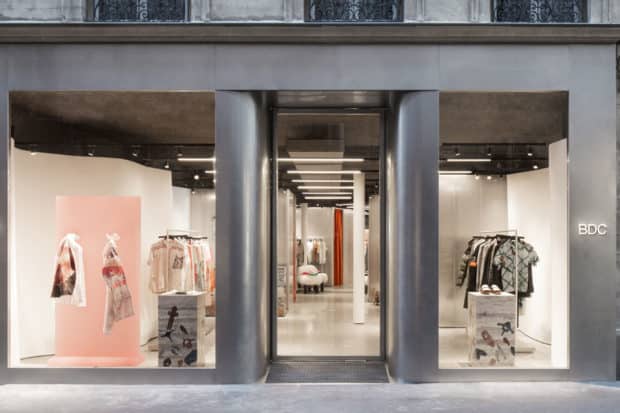 With no shortage of beautifully designed boutiques that present clothing and accessories like objets d’art, Paris makes shopping feel like an artistic experience. This fall marked the opening of the Diptyque Pop-Up Bazaar on the chic rue Saint Roche, near the Palais Royal. Until December 31st, the “bazaar” will be selling limited-edition artist collaborations like ceramic tableware decorated by Parisian painter Julien Colombier and pajamas illustrated by Pierre Marie, who has published drawings in The New Yorker and designed motifs for Hermès and A.P.C.  Manolo Blahnik, having finally found a perfect location in the Palais Royal, opened his first boutique in Paris over the summer. In honor of this long-overdue vernissage, Blahnik has created a special Parisian collection that can be admired in the gorgeous bi-level shop overlooking the royal gardens. Those looking to discover new menswear brands will want to check out BDC (Boys Don’t Cry), a sleek modern boutique in Saint Germain des Près that is decorated with a striking neon artwork by French artist Claude Lévêque. Vintage lovers will want to visit Thanx God I’m a V.I.P., the chic secondhand concept store that has all the style mavens buzzing. And, last but not least, upscale department store Galeries Lafayette Champs-Élysées is now drawing even more shoppers to the famed avenue. The four-floor, Art Deco-style emporium is a great place to shop for iconic French luxury brands as well as up-and-coming labels. One could easily spend all day in this shopping mecca, which features two fine-dining establishments, an upscale food court and a gourmet market.

This powerful exhibition brings together works made between 1971 and 1992 in a fascinating exploration of Bacon’s literary influences.

The Palais de Tokyo turns a spotlight on the contemporary French artistic scene, devoting its massive exhibition space to work by artists of different generations, who are linked—either provisionally or lastingly—to France.

This dreamy exhibition features more than 100 works by a group of artists dubbed the “modern primitives,” whose work challenged both the avant-garde and academic approaches of their contemporaries.

This beautiful exhibition at the d’Orsay is the first to fully explore Degas’ deep connection to the opera as a whole—the stage, the music, the performers, the audience and the backstage areas.

Twenty-seven years after the last retrospective dedicated to Toulouse-Lautrec, the current show at the Grand Palais emphasizes the artist’s poetic and political ambitions.

The first French retrospective for this American artist brings together more than 100 works made between the 1990s and the present day in the stately rooms of the former French mint.

This retrospective marks the first major exhibition in France dedicated to El Greco, the Greek-born painter who trained in the Byzantine tradition before continuing his studies in Italy and Spain.

This exhibition brings together examples of what art critic Christian Zervos described in 1938 as Picasso’s “magic paintings.” These experimental works made between 1926 and 1930 show the development of an original stylized vocabulary comprised of strange figures and monumental architecture.

To mark the 500th anniversary of da Vinci’s death, the Louvre (which holds the largest collection of da Vinci paintings in the world) has organized an unprecedented retrospective with major and lesser-known works borrowed from around the globe.

In collaboration with London’s Tate Museum, the Musée Rodin is hosting the British sculptor’s first major exhibition in Paris.

Komunuma
This new arts enclave just outside of Paris, whose name means “community” in Esperanto,  opened its doors in October and is the new home of five prestigious Parisian galleries (Air de Paris (est.1990), Galerie Imane Farès (est. 2010), Galerie Sator (est. 2011), Galerie Jocelyn Wolff (est. 2003) and In Situ Fabienne Leclerc (est. 2001). The 120,000-square-foot former industrial site will also be home to the Fiminco Foundation and the new headquarters of the FRAC île-de-France, both slated to open in 2020.