Strung like a pearl approximately 70 miles down the Elbe River from its mouth at the North Sea, the elegant city of Hamburg commands a prominent position. With haunting canals lined by former warehouses weaving through the harbor front and the serene Lake Alster carving out the city center, Hamburg’s aquatic topography has justly shaped its past and present. The international port city, once a major power player in the ancient Hanseatic League, rose to affluence as a shipping, finance and media hub and cultivated a renowned arts and music culture. Despite devastation in World War II, Hamburg has been elegantly rebuilt and pockets of old-world Baroque architecture still remain intact. Exciting new constructions have debuted this past year, which juxtapose the traditional façades, such as the majestic Elbphilharmonie concert hall designed by Herzog & de Meuron, a Zaha Hadid–designed riverfront promenade and a sleek, luxury hotel, The Fontenay, on the shores of Lake Alster. With a rich cultural scene, world-class gastronomy and trend-setting shopping, Hamburg is poised to take the stage as one of Europe’s most dynamic cities. Here are six reasons to include the maritime metropolis on your next European itinerary.

The new Elbphilharmonie is a musical (and architectural) marvel 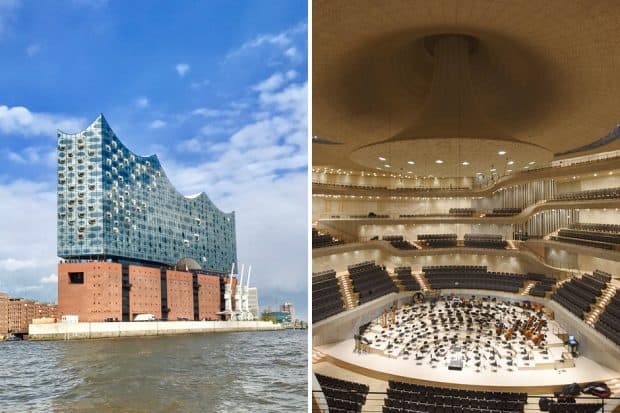 Ten years in the making and costing almost $1 billion, the riverfront Elbphilharmonie debuted in early 2017. The pièce de résistance from renowned architectural duo Herzog and de Meuron has quickly become the city’s symbol and is already one of the world’s leading halls for classical music. The dramatic design echoes the city’s harmony of old and new, with a brick base that was once a 19th-century warehouse and an avant-garde, mirrored roof in the shape of a sail, which harkens to Hamburg’s longstanding maritime heritage. The former conductor of the New York Philharmonic, Alan Gilbert, has been announced as the new head of the Elbphilharmonie Orchestra, and the institution has already drawn several of the world’s famed musicians. The interiors of the main concert hall were designed in a fluid, futuristic style with fiber walls specially crafted to optimize acoustics.

But long before this soaring edifice graced the city skyline, musical history abounded in Hamburg. Famous composers, such as Johannes Brahms, George Telemann and Carl Bach launched their illustrious careers as choir directors in the city’s most prominent churches, while the young Beatles started performing at gritty venues in the St Pauli district. Tours can be taken to trace the steps of both the classical and modern musical superstars of the city.

A sleek luxury hotel will grace Lake Alster this fall 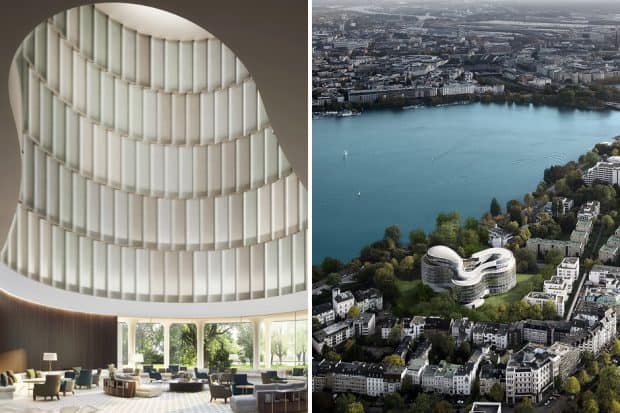 A city with a cultural attraction as extraordinary as the Elbphilharmonie needed a hotel that matches its novelty. The Fontenay, Hamburg’s much-anticipated five-star property, which opens in November, resides in a leafy, park-like neighborhood on the banks of Lake Alster. Its magnificent design and resort-within-a-city ethos has already earned The Fontenay accolades and it will be the city’s newest luxury property in 18 years. Designed by one of Hamburg’s most prolific architects, Jan Störmer, The Fontenay emphasizes a free-flowing shape of intersecting infinity signs and boasts floor-to-ceiling glass, a neutral color palette and a contemporary aesthetic. The hotel will house 130 spacious rooms and suites, a French- and Nordic-inspired restaurant helmed by a Michelin-starred chef and a sprawling rooftop spa and swimming pool. The magnificent Elbphilharmonie also holds a hotel, luxury condominiums, a restaurant and promenade overlooking the river and cityscape.

The gastronomy is globally influenced, but locally sourced 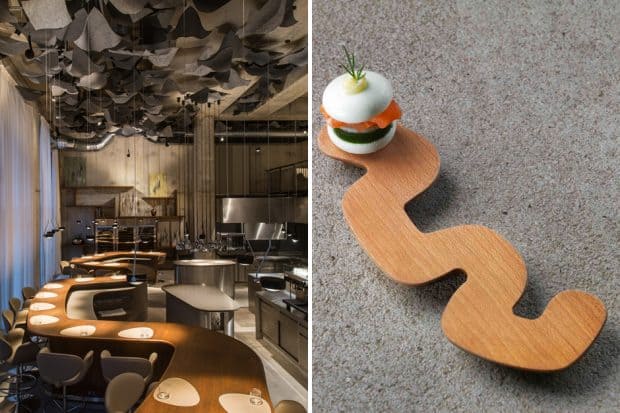 Hamburg’s position as Europe’s second biggest port, and its long tradition as an international trading center, has brought a mosaic of global influences to its dining scene. The city boasts some of the most sophisticated gastronomy in Germany with nine Michelin-starred restaurants, including the three-star darling by the river, The Table, and the bespoke Trüffelschwein, both of which elevate each dish to an art form. A far cry from the hearty, meat-heavy fare often associated with Germany, Hamburg’s cuisine emphasizes seafood due to the city’s advantageous position near the North Sea. Menus offer innovative renditions of fish-centric classics, artistic presentations that recall a Scandinavian flair and fresh, local produce sourced from nearby valleys. 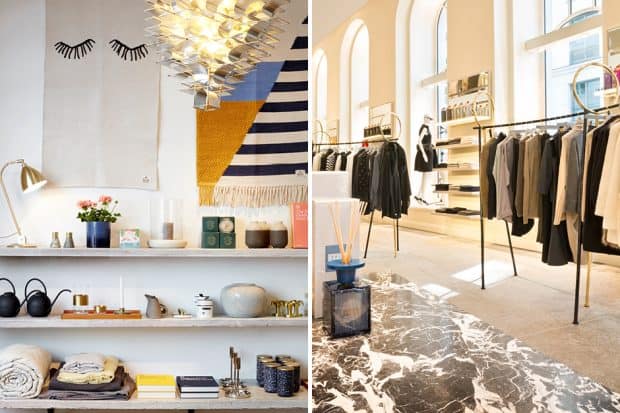 With well-heeled citizens and a rich cultural milieu, Hamburg brims with chic boutiques, sleek concept stores and elegant artisanal workshops. Upscale shopping is found in the Alstadt (Old Town), on the Neuerwall, which houses the expected luxury brands as well as Hamburg institutions including Unger, Petra Teufel and the Alsterhaus department store. As the city that bred fashion legends Karl Lagerfeld and Jil Sander, Hamburg has a dynamic local design scene, much of which is concentrated in the cool, diverse pockets of Karolinenviertel, home to ateliers such as Maison Suneve and Annette Rufeger, and contemporary concept shops like Minimarkt, Kauf Dich Glucklich and Frauleinwunder abound in Schanzenviertel. Those looking for polished boutiques should visit Eppendorf, an affluent and elegant suburb located to the north of Lake Alster, and home to shops like Little Department Store and Anita Hass and chic homewares at Wohndock and Kaufrausch. For beautiful local products, don’t miss the small neighborhood of St. George, located to the east of Lake Alster. Here Koppel 66 is home to seven artisanal workshops and Kaufhaus is a charming shop for Hamburg-made gifts. 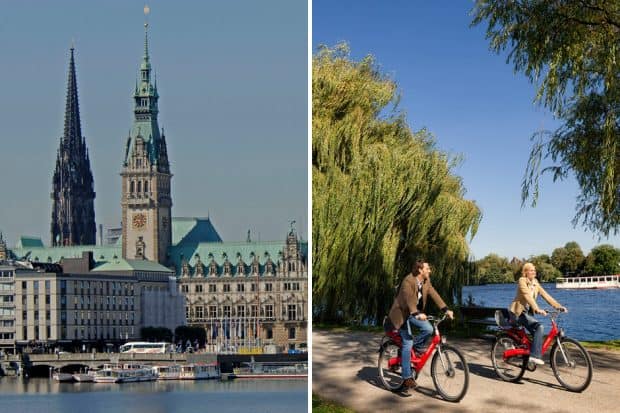 Hamburg’s idyllic setting, wedged between the Elbe River and the majestic Lake Alster, imbues the city with a natural beauty and gives its citizens an appreciation for the environment and sustainability. Hamburg was declared the European Green Capital in 2011 for its initiatives to reduce carbon emissions and protect the landscape. Wherever you are in Hamburg, you are never far from a picturesque body of water because of the web of canals that slice through the city between the lake and river. In the warm months, sailboats flit across Lake Alster, runners and cyclists take to the leafy path that rings the lake’s shores and river cruises depart from the city center to the sandy beaches and halcyon villages that line the Elbe.

Hamburg is easily accessible and combinable with other European destinations

Direct flights from New York to Hamburg run in season (May to October), but the city is a great destination to combine with other European locales. The international airport, just 20 minutes outside of the city, conveniently connects the maritime port with the rest of the continent with numerous flights daily to hubs like London, Amsterdam and Barcelona, as well as to the Middle East. For those who wish to travel via car, Berlin is less than two hours away and Copenhagen just four, including a car ferry. Also, a flight or train ride away from Hamburg lies the sophisticated and windswept isle of Sylt, a spit of sand arced in the North Sea. A favorite summer enclave of Hamburg residents, the island boasts long stretches of pristine beach (the island is famous for its nude beaches), charming towns filled with excellent restaurants and boutiques and quaint, thatched-roof cottages. 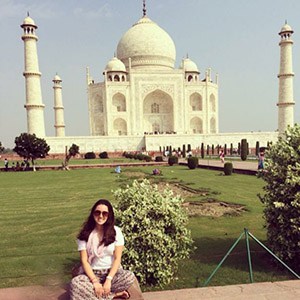