With more than 6,000 islands (some 200 of which are inhabited), Greece offers a plethora of bucket-list destinations where travelers can find their own slice of paradise—and many still feel like hidden gems, rich with volcanic islands, Greek cuisine, secluded beaches and remote clifftop fortresses. So, where should you begin living out your Golden Age of Greece fantasies? We recommend somewhere your friends have likely never heard of. Read on for our favorite Greek islands that have managed to stay under-the-radar—for now.

Contact Indagare for assistance planning a customized journey to Greece. Our travel specialists can match you with the best villas and boat charters, arrange great meals and activities and organize the ideal route for you and your group. 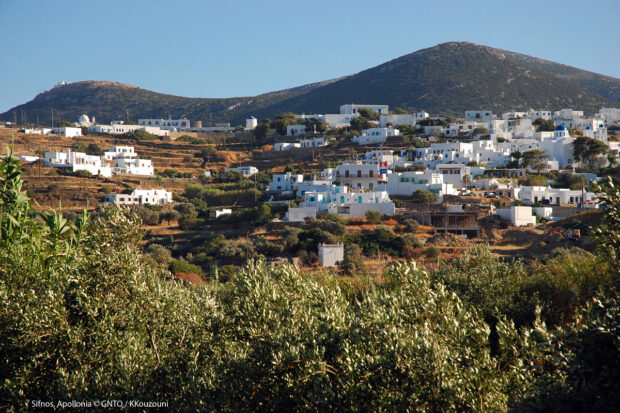 Where it is: In the heart of the Aegean Sea, dotted with cubic whitewashed Cycladic houses, the charming island of Sifnos belongs to the western part of the Cyclades islands group (also home to Mykonos and Santorini).

What to do: Famous Greek chef and Sifnos local, Nikolaos Tselementes, put Sifnos on the map as a gastronomic destination—he created the first-ever physical cookbook in Greece, with recipes that modernized and changed the arc of the country’s cuisine. Immerse yourself in the culinary scene at innovative restaurants like Maiòlica and Omega3 or enjoy more traditional spots like Drimoni and Okyalos. Besides indulging in the fresh cuisine, there’s plenty of exploring to be done in Sifnos; stroll through the villages of Kastro, Artemonas and Apollonia, lay out on the sandy Vathi Beach or escape the heat with a swim beneath Chrisopigi Monastery. If you’re visiting during the spring or autumn seasons, the hiking trails that cross the island to monasteries, chapels and secluded beaches are a great way to see the island.

How to get there: There is no airport on the island, but ferries run almost daily from the port of Piraeus in Athens (about two hours in duration), and there are ferry connections between other islands of the Cyclades. 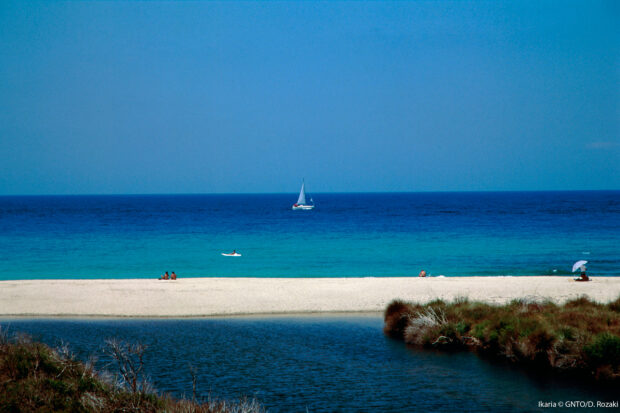 Where it is: One of only five “Blue Zones” in the world (regions where people tend to live longer than anywhere else), Ikaria is located on the Eastern Aegean Sea and is an ideal destination to slow down and recharge.

What to do: The stress-free, optimistic energy paired with the deliciously healthy cuisine and exercise-inducing landscape makes it no wonder Ikaria is famous for the longevity of its inhabitants. Get a taste of the lifestyle and the local wine at traditional village feasts organized every summer. Enjoy small plates on the water from Rakóstrōto, and fresh fish accompanied by sunset views at Anna’s Fish Tavern on Nas Beach. Ikaria’s wild, natural landscapes shouldn’t be missed; rural villages are set amidst mesmerizing beaches, mountain views and hiking trails. Visit Seychelles Beach for cerulean blue waves and polished stones, or trek Halari Gorge for magnificent waterfalls and old stone bridges.

How to get there: Domestic flights from Athens, Lemnos and Thessaloniki fly to Ikaria Island National Airport, where taxis or the island’s public transport take you to your final destination. Ikaria is reachable by ferry from Piraeus, Athens; however, the trip is 11 hours and departs only three times per week. Ikaria is also reachable by ferry from Samos, Syros, Chios and Mykonos. 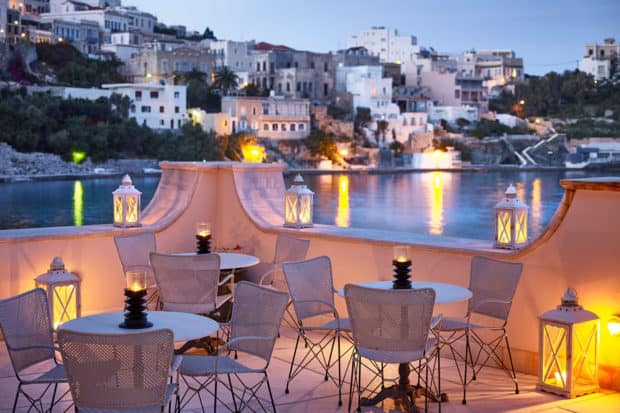 Where it is: Part of the Cyclades, Syros neighbors the busier islands of Santorini, Mykonos and Paros and is a great choice for an island experience that goes beyond the beach.

What to do: Its Italianate waterfront capital, Ermoupolis, has neoclassical architecture and a robust cultural scene. There’s almost always a festival on— film, ecclesiastical music and the Greek blues known as rembetika. Another must-see is Ano Syra, a typical Cycladic village inhabited by descendants of Venetian settlers, where you can visit the Orthodox and Catholic churches, wander the whitewashed alleys or swim off the platform of the Asteria Beach Bar. The island has shockingly good beachfront tavernas. In Ermoupolis, enjoy phyllo-wrapped shrimp, salads of cherry tomatoes and local galotyri cheese and other Mediterranean dishes at Mazi, Avant-Garden and Peri Tinos. Or venture out to Delfini beach, in the north, stopping for lunch at Allou Gialou on the water in Kini.

How to get there: There are flights and ferries from Athens. It’s also easy to reach by ferry from Mykonos, Paros and other islands. — Eleni Gage 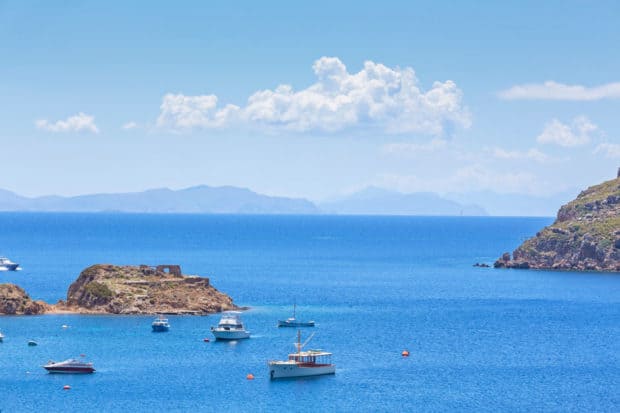 Where it is: Patmos, also known as the “Island of the Apocalypse,” is part of the Dodecanese islands and is geographically closer to Turkey than to mainland Greece.

What to do: The crowning glory is the 11th-century Monastery of St. John the Theologian, a museum and working monastery located above the Cave of the Apocalypse, where the saint is said to have had the visions that inspired the Book of Revelation. Chora, the whitewashed citadel-town surrounding the monastery, is a UNESCO World Heritage site that has attracted such high-profile visitors as the Aga Khan and Jackie Onassis. The island offers a variety of lovely beaches: the multicolored-pebble strand of Lambi, the sandy, tree-lined Agriolivadi and lively Kambos, home to laid-back George’s Place beach bar. Dine at Benetos Restaurant, named for the owner and chef, a native son who trained in Miami and returned to his family farm overlooking the sea to serve fresh ceviches, sardines he cures on site and whatever delicacies are in season, such as stuffed squash blossoms.

How to get there: There is no airport, which helps to keep the crowds away. You can charter a yacht and sail in, fly into Kos, Samos or Leros and take a hydrofoil or book the seven-hour ferry from Athens, which departs about three times a week and gets in at 2:00 a.m. — Eleni Gage 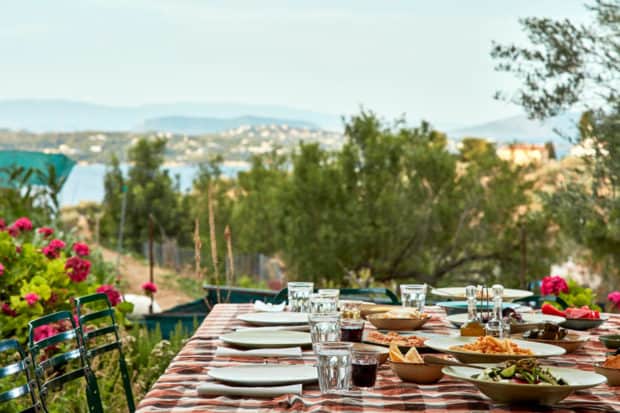 Where it is: This picturesque, yacht-filled escape is part of the Saronic Gulf islands, the closest archipelago to Athens (two hours by ferry). Cars are not allowed; horse-drawn carriages are the preferred mode of transportation.

What to do: Spend your days sailing (the island’s famous yacht race takes place in June), shopping for olive oil and honey or browsing beach boutiques. Or spend time rejuvenating at the secluded beaches, including Kaiki, which has an excellent taverna, and the fragrant, pine tree-lined Ayia Paraskevi. In the evening, you can dine on fresh-caught fish at Tarsanas Fish Tavern, in the Old Harbor, or sample bouillabaisse at Patralis, situated right on the water. The two open-air cinemas, Ciné Titania and Ciné Marina, are also a scene in summer. For a special farm-to-table experience showcasing traditional Greek gastronomy, visit the Bostani Organic Farm. Here you can taste the fresh flavors grown in the hills of Spetses, or even partake in a cooking class where you will learn traditional organic farming techniques before picking vegetables and herbs to make your own meal.

How to get there: There is an easy and frequent hydrofoil service from Athens that lasts approximately three hours, as well as connections to Spetses from Poros, Hydra and the eastern coast of Peloponnese. — Eleni Gage 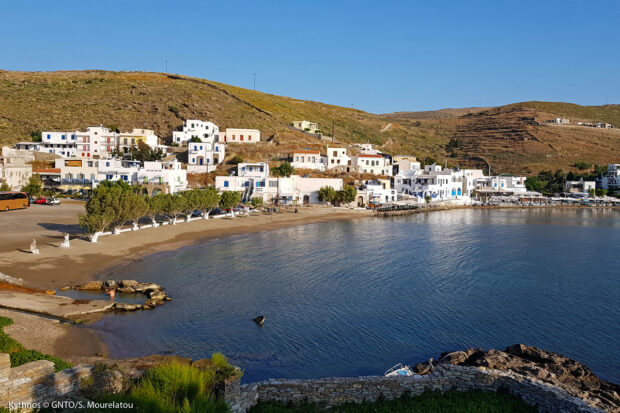 Where it is: Kythnos is in the western part of the Cyclades and is a short ferry ride away from bustling Athens, making it the perfect quick getaway.

What to do: This laid-back island has two main villages, Messaria (known as Chora) and Dryopida (known as Chorio), and both consist of elegant architecture, traditional tavernas and narrow passageways colored with flowers. For beachgoers, Kolona Beach is considered one of the most beautiful beaches in Greece (which of course makes it more popular than the others on the island) and is a narrow strip of land that connects Kythnos to the neighboring islet Agios Loukas. Another option is Agios Dimitrios Beach, a quiet spot to rest under the natural shade of the Tamarisk trees or take a dip in the crystalline waters. For a free spa treatment, head to the village of Loutra—known for its natural thermal springs rich in healing properties like iron and sulfur.

How to get there: Kythnos is reachable by ferry from the Piraeus and Lavrio ports in Athens (about a two-hour ride). There are also ferries from other islands of the Cyclades: Kea, Serifos, Sifnos and Milos.

Contact Indagare for assistance planning a customized journey to Greece. Our travel specialists can match you with the best villas and boat charters, arrange great meals and activities and organize the ideal route for you and your group. 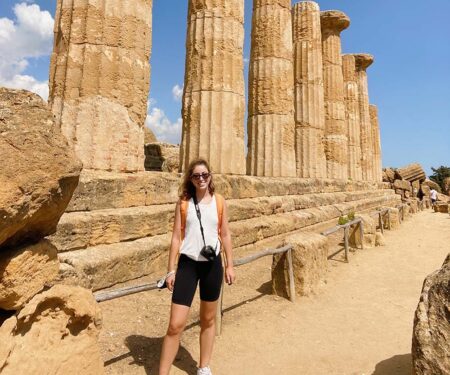