Just Back from Oslo and Svalbard: The Final Frontier

The Final Frontier. I’ve had those three little words at the bottom of my bucket list since the day I started keeping one. I wrote it down as an afterthought, a placeholder. It was a joke at the time. Eventually I’d visit all the Italian vineyards and tropical beaches I’d ever heard of, growing old and hunched over under the weight of my own experience, but Death could not claim me yet because there was always one more place to go, and even if I couldn’t define what that place could be, it was out there—and it was waiting.

This May, I had the opportunity to visit Svalbard, a Norwegian archipelago about 600 miles from the North Pole. I was traveling aboard Quark Ultramarine, a just-launched specialized polar expedition vessel. After our 10-day voyage when she docked again, I sat in the tiny airport awaiting our charter-flight back to Oslo, chewing a pen absentmindedly and holding my notebook, wondering if now was the time to check that final box as complete.

Contact Indagare or your Trip Designer to start planning a trip to Norway’s Svalbard Archipelago. 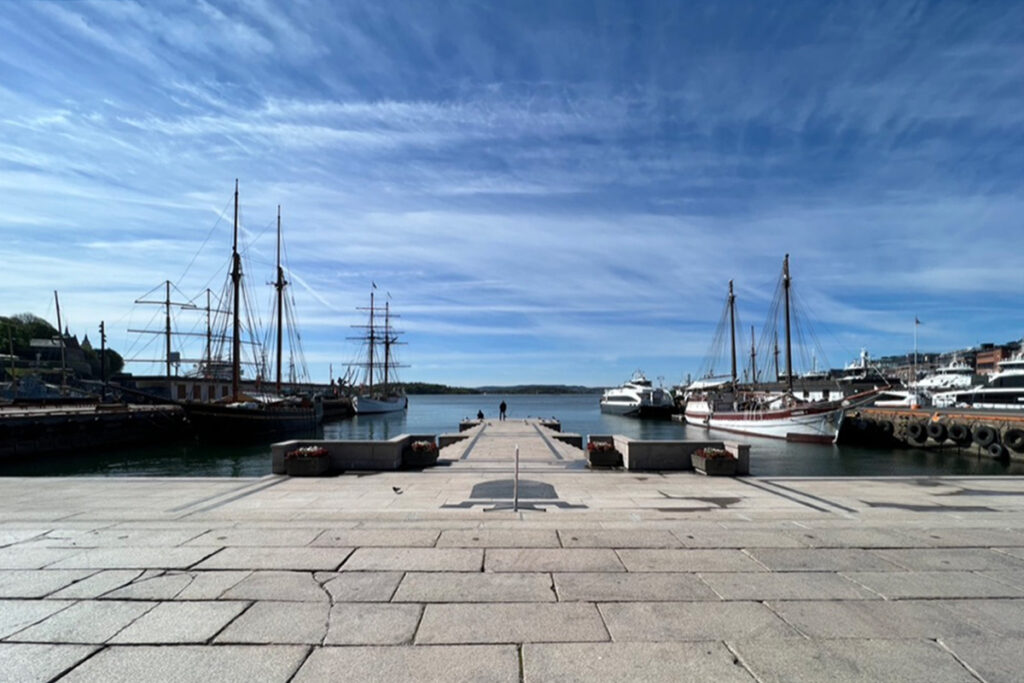 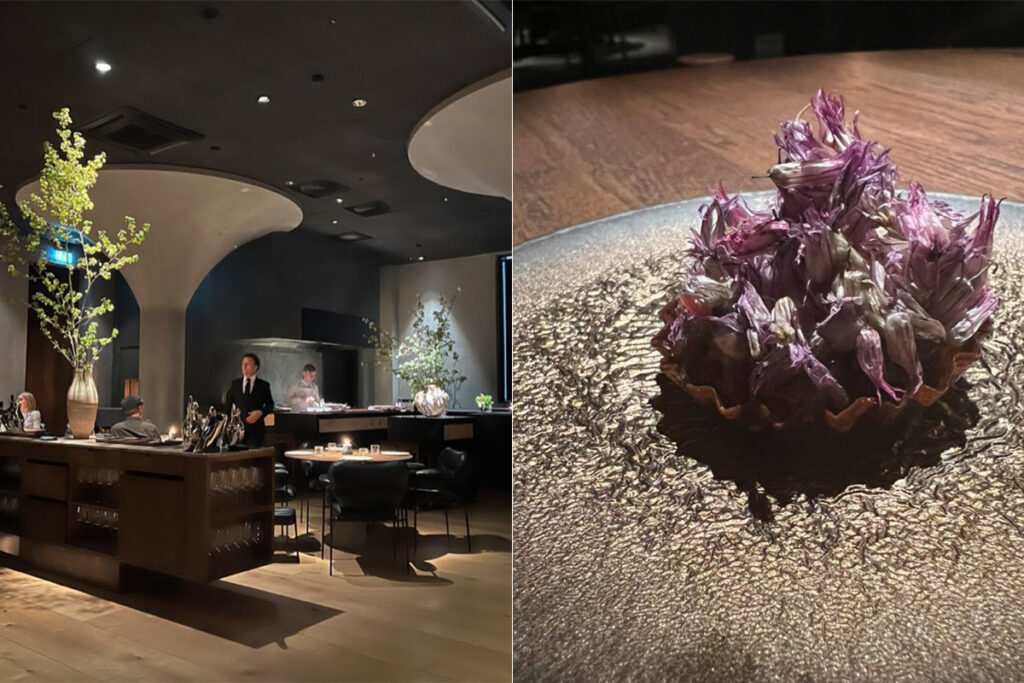 Before we got to Svalbard, we routed through Oslo, and it was this combination that made Svalbard feel so unique. The ease of transport between a world-class capital city and one of the most remote places on the planet elevated both experiences—a trip far more than the sum of its parts.

Often seen as a logistical stopover point for Norway’s more familiar outdoor destinations, Oslo has recently focused on reimagining—and rebranding—itself. Its “Fjord City” project has seen an explosion in development along the waterfront. In 2021, the newly designed Munch Museum opened near striking Oslo Opera House (itself a masterclass in interactive architecture with sloping, walkable roofs that plunge towards the sea). And just this month, the National Museum reopened inside an enormous glass-and-slate structure. The Nordic region’s largest museum, it is a celebration of Norwegian culture both new and old, where works like Munch’s “The Scream” can be seen alongside Viking relics.

In summer months, boat parties and live music are regular activities by the harbor, and restaurants, too, line the boardwalks and plazas. One of the best waterfront restaurants, of course, is Maaemo, near the new Munch Museum and opera house, hidden behind a nearly unmarked door since it opened in 2010. Only a two-by-five-inch golden plaque next to the doorbell shows the name of the restaurant and the number of Michelin stars they’ve received this year—three, for those counting. The restaurant’s moody, modern interior belies the traditional care to which chef Esben Holmboe Bang has given the menu. The 19-course tasting menu is a journey through the history of Norwegian cuisine, featuring hyperlocal ingredients and elevated takes on traditional dishes served all over the country: Langoustine claw with chicken skin and vendace roe; Rømmegrøt (a sour cream porridge with milk, flour and butter); scallops marinated with elderflower preserved berries and XO-sauce. As each dish comes out, the waiters offer context on its preparation and sourcing, which is invariably from a nearby organic farm or wild field or forest. And while the staff is clearly proud of their three Michelin stars, they seem to be even more proud of being one of the first recipients of Michelin’s Green Star, showcasing restaurants with a particular focus on sustainability.

With its Michelin-starred dining and booming cultural scene, Oslo is rightfully positioning itself as an equal to its more-visited neighboring Scandinavian capitals, Copenhagen and Stockholm. So it’s all the more striking to leave behind this city—where locals enjoy their summer sunset drinks around 11:00 p.m.—and venture to a world where the sun never sets at all. The clattering of glasses and the muffled yadda-yadda of distant Oslo patios are replaced by a quiet serenity of silence, broken only by the occasional whistles of wind blowing flurries of loose snow across the sea ice. 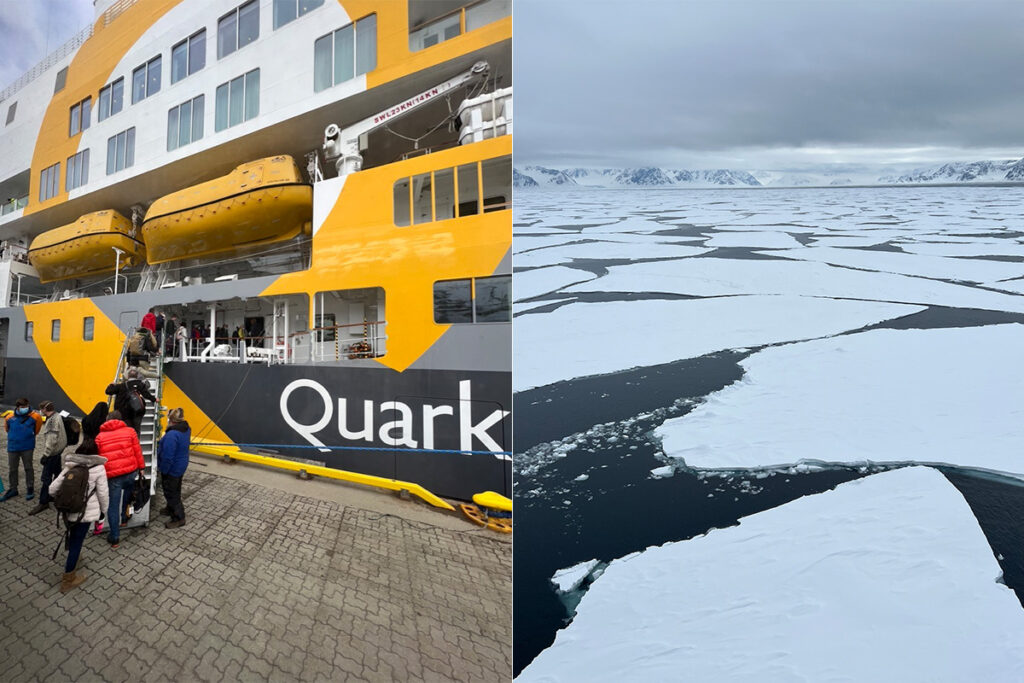 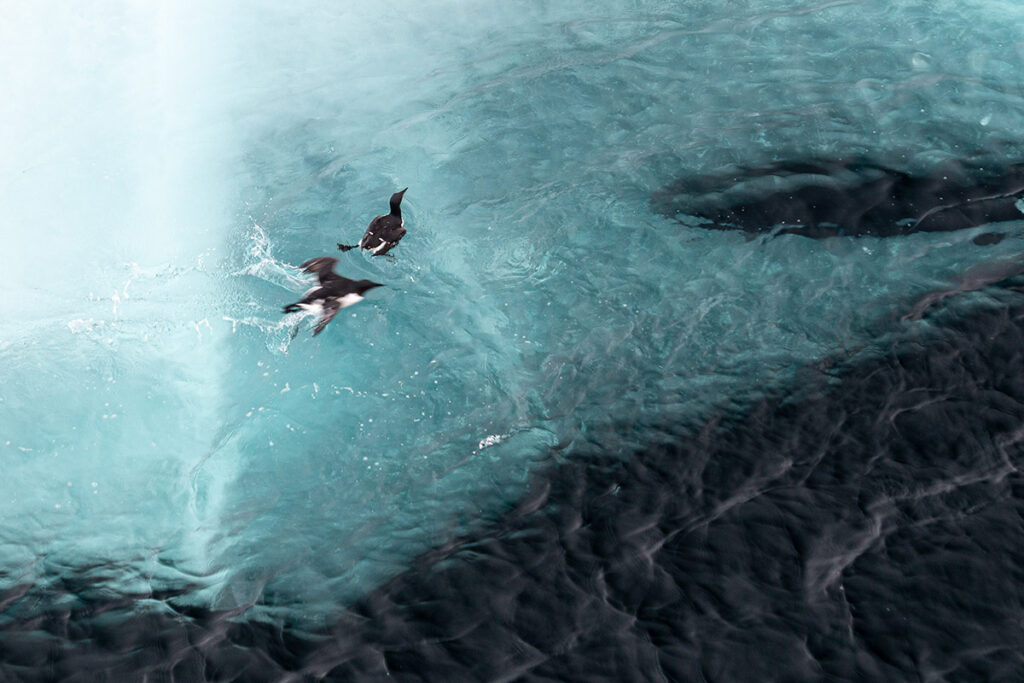 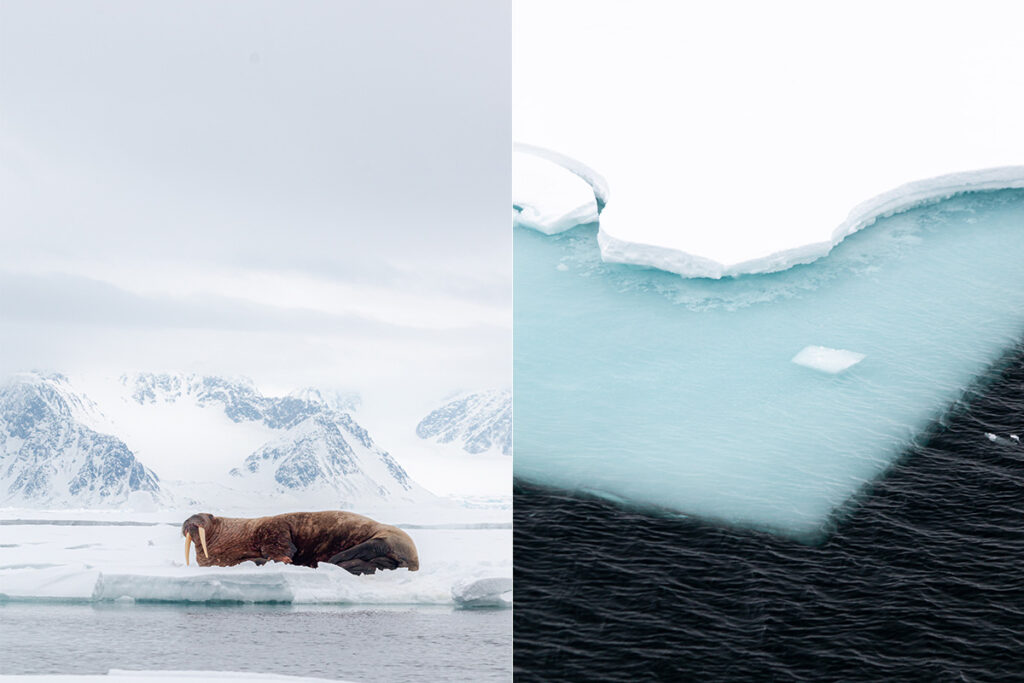 More than 1,200 miles to the north, Longyearbyen feels worlds away from Oslo’s newfound panache. The historic mining town, with a population just over 2,000 strong, now relies more on supporting Svalbard’s visiting naturalists and a growing number of nature-loving travelers. There are no roads outside of town—only snowmobile tracks. And near the outskirts of the settlement, a giant kennel houses locals’ arctic dogs—working animals far closer to wolves than not (visitors are actively encouraged to keep their distance). The rest of town is filled with the homes of seasonal workers, outdoor gear shops, and signs of a 20th-century mining boom. Because it’s close to the North Pole, children are told that Santa Claus lives in one of the empty mineshafts nearby, and cookies and milk are brought there every Christmas.

“Because it’s close to the North Pole, children are told that Santa Claus lives in one of the empty mineshafts nearby, and cookies and milk are brought there every Christmas.”

At seven stories, Ultramarine towers over town like a sci-fi robot from the future. It can accommodate up to 199 passengers, large by Svalbard and Quark standards, but still intimate compared to most ocean-going cruise experiences. Invisible but dearly appreciated, giant retractable stabilizing wings underwater ensure a smooth voyage: Ultramarine was specially designed to handle the turbulence of the legendary Drake Passage with ease during its Antarctica season. Each deck has outdoor wildlife-spotting areas in the aft and fore of the ship, the most prominent being on Deck Seven, just beyond the ship’s Panorama lounge. This turned out to be the most popular spot for most guests, rotating between holding binoculars outside and a warm coffee over board games inside. 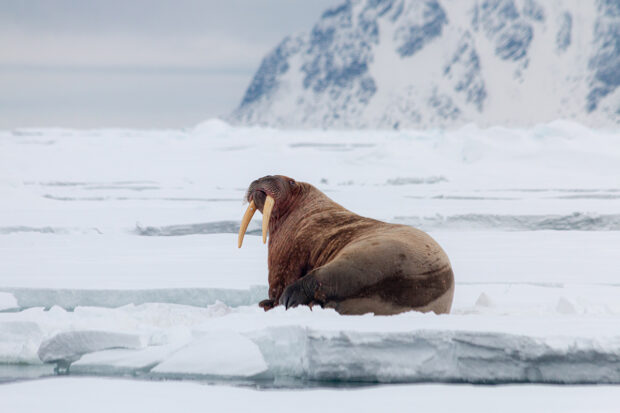 As we cruised out of the fjord, Longyearbyen gave way to a vast open ocean bordered only by the frigid peaks of mountains untrodden by human feet. I hadn’t seen anything like this since my trip to Antarctica in 2019 (a trip that required far more time and effort to reach than these remote Norwegian islands). Here, just a short plane ride from Oslo, was a place that howled the call of the wild—totally inhospitable to human life.

Svalbard is the Final Frontier: a tangled archipelago of fjords and inlets, surrounded by the fast ice of an Arctic winter that doesn’t realize it’s summer yet. At 80 degrees above the Equator, we reached an empty expanse of ice that stretched forever north until there was no more north to go. Here, faced with the crackling edge of white that fades to blue and into inky black, there’s nowhere left to go.

Out on the Ice…with Polar Bears 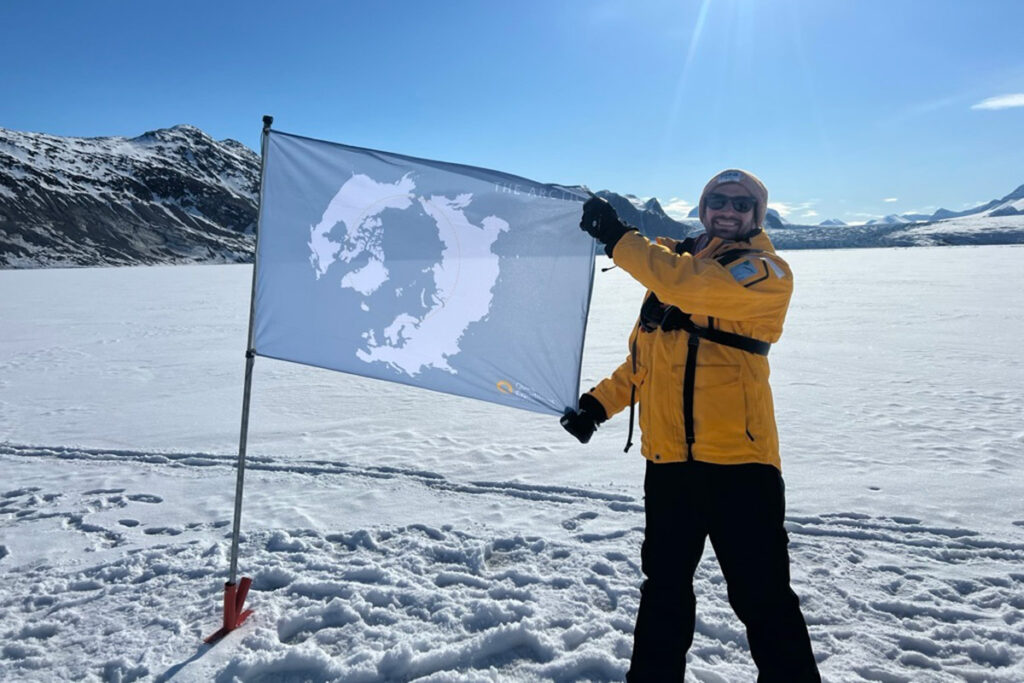 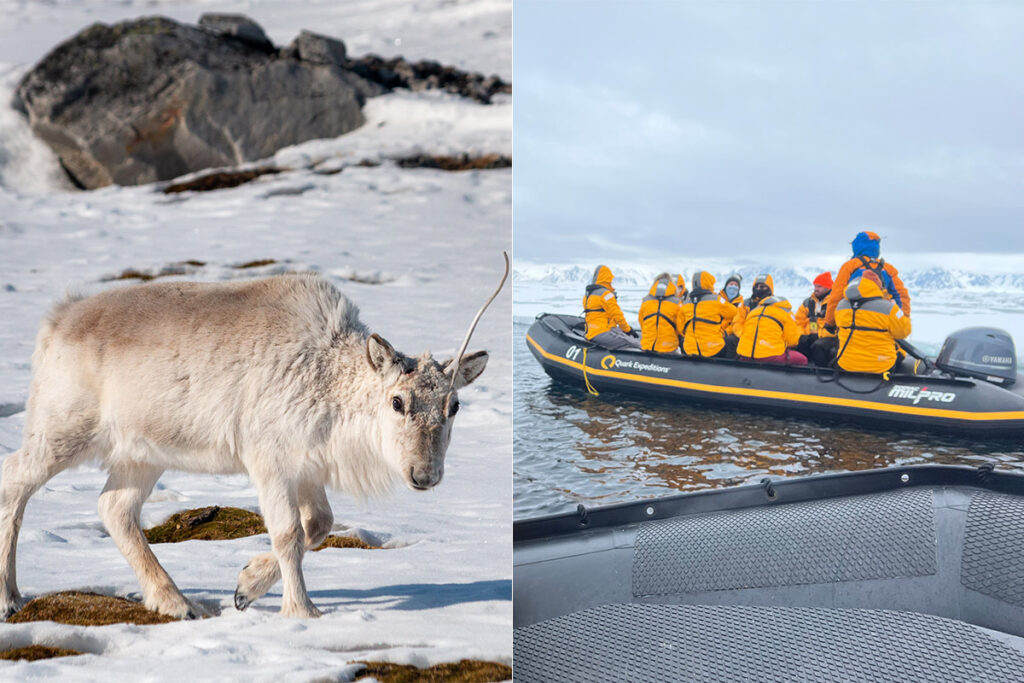 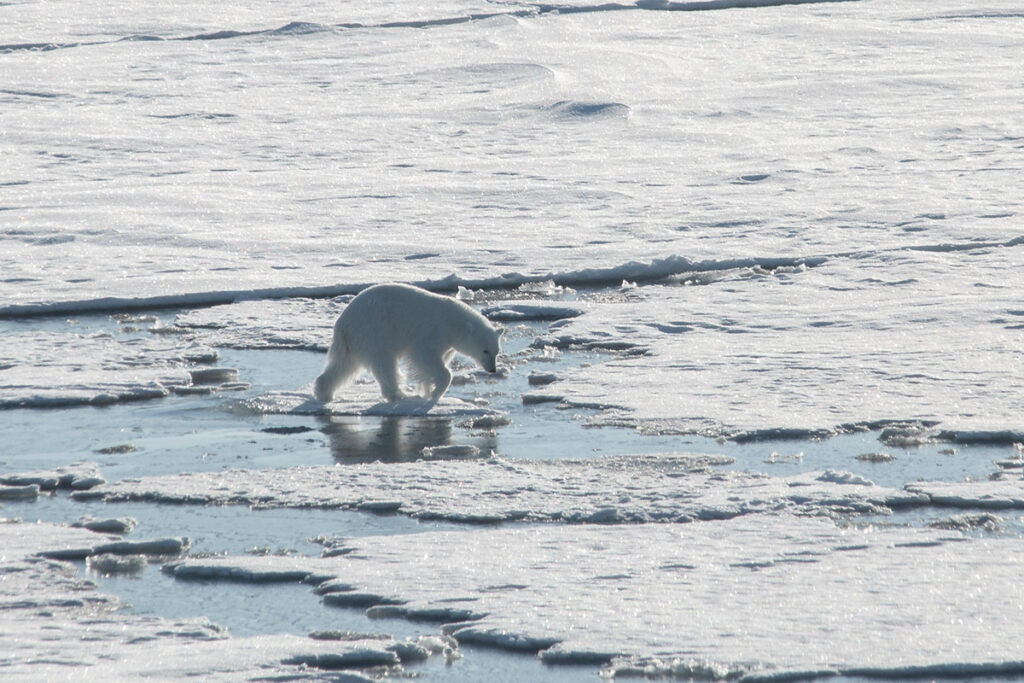 Days in Svalbard aboard Ultramarine are fully scheduled. There is a guide for every 10 passengers, who takes small groups on morning and afternoon zodiac excursions on both land and sea—“land,” meaning sea ice. These ice expeditions are rare treats, limited by the availability of the ice itself, yes, but also due to Quark’s caution surrounding chance encounters with polar bears, hungered in the face of an increasing summer food scarcity.

On our first day, our boat came across a single bear, sleeping in the distance. Something woke him, and the animal started lumbering slowly along the ice, pulled along by its nose. We followed it in awe for about half an hour, drifting slowly behind it, until we came across a mound in the distance surrounded by scavenging Arctic birds. As the polar bear got closer, we realized that the mound was the immense carcass of a seal. More than that, it was already guarded by an immense bear which had dragged it from the water. And our newcomer was not the only animal patiently waiting—a mother bear and her cub lay on the ice not far away, occasionally daring to test how close the hunter would let them reach.

Polar bears generally need sea ice to hunt. It provides them an easy place to rest while keeping them decidedly in the habitat of their primary prey, seals. As the climate warms, the sea ice retreats further north earlier in the season, leaving many bears stranded on dry land—or suddenly out to sea. Summer has always been a challenging season for these bears, but it is rapidly becoming an obstacle they cannot overcome. In 2020, a polar bear, ravenous from lack of food, killed a camper just outside Longyearbyen. 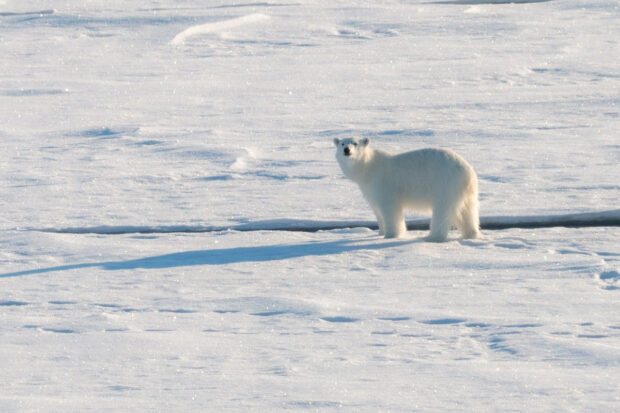 There is a real risk that polar bears in the region will become extinct within 50 years. This is one of those stats that gets rattled off in seemingly every nature documentary that comes out nowadays. But it’s all too easy to ignore it, and to become habituated to the idea of the polar bear as some kind of National Geographic prop for fundraising efforts. But these are intelligent living creatures. They exist in a land of wild beauty: as dots on a horizon of ice, occasionally dipping into the water, and occasionally playing in the snow like dogs. Seeing them in their natural environment (and not plunging into a pool at the San Diego Zoo) affords one a sudden sense of stewardship towards their safekeeping that I haven’t experienced since seeing gorillas in the mountains of Rwanda.

For me, Svalbard was the Final Frontier, a place I couldn’t hope to go beyond. But for these incredible animals, it was simply home, and how lucky was I to be able to see it.

Contact Indagare or your Trip Designer to start planning a trip to Norway’s Svalbard Archipelago. 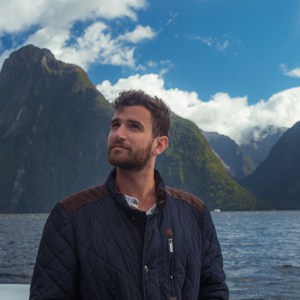 “Summer has always been a challenging season for these bears, but it is rapidly becoming an obstacle they cannot overcome.”