Tenures at the galleries of such interior design icons as John Rosselli, Andre Emmerich and Bunny Williams, as well as six years as the Design Editor for Architectural Digest, have brought Howard Christian all over the world in search of the most exquisite works of architecture and aesthetics—but few places have captured his eye quite like St. Petersburg.

This October, Howard will be hosting a design and history-focused Insider Journey to the Russian metropolis, where he will open doors to behind-the-scenes access to the Hermitage, Catherine Palace, Pavlovsk and more, along with special receptions at private homes and galleries. Here, the design expert explains why the time to visit St. Petersburg is now—especially for lovers of design. 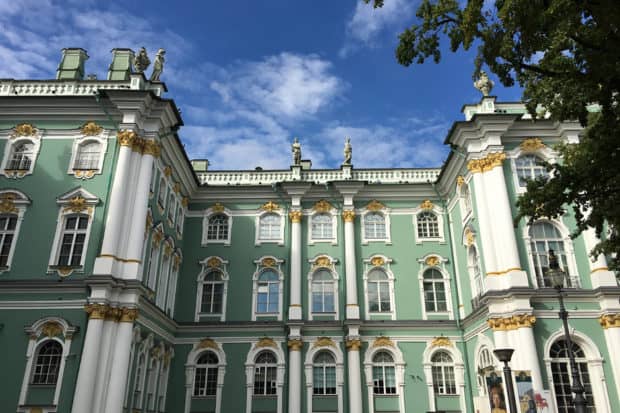 The minty-green exterior of the Hermitage, where travelers on our October Insider Journey will be able to explore after-hours with an expert guide, with the chance to see the winding of the famous Peacock Clock. Plus, we’ll have access to the museum’s private storage chambers, a treasure trove of Imperial items that is not open to the public.

What sparked your now decades-long relationship with the city of St. Petersburg?

Howard Christian: I first traveled to St. Petersburg 22 years ago for my work with the Stroganoff Foundation, with the goal of raising funds for the restoration of the Stroganoff Palace, which was built by Francesco Bartolomeo Rastrelli (who also built the Winter Palace and Catherine Palace). It had fallen into a state of great neglect after having been co-occupied by the navy and the KGB during the Revolution and then being acquired by the state. When I first started meeting people, talking to them and being invited into their homes, I was curious about what life had been like under the Soviets and I would ask questions like, “Did you really stand in line for an egg? Would they shoot you if you went to church?” And they would ask me the same kinds of misinformed questions, and you would realize—we’re all just people, sometimes with ideas based on images. And it’s important to meet others, and to learn. Since those early experiences, I’ve kept going back on my own.

Related: Just Back from St. Petersburg 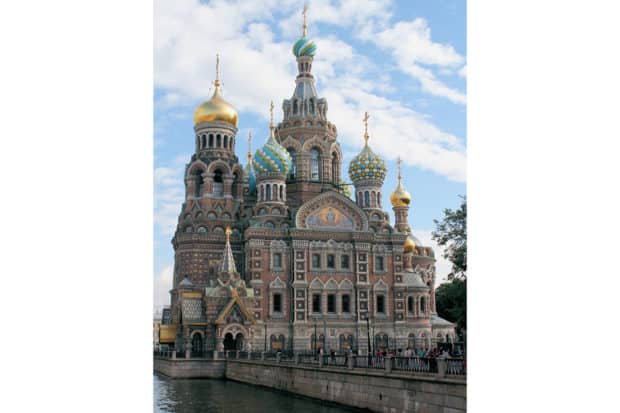 St. Petersburg’s Church of the Savior on Spilled Blood.

What makes St. Petersburg unique from other major European cities?

HC: St. Petersburg is an architectural laboratory, built by the greatest architects in Europe over a 300-year period. When Peter the Great decided to create his “Window on the West,” he told the nobility that they had to build palaces in St. Petersburg from stone—and St. Petersburg is set on a marsh, with no stone at all! Russian, French and Italian architects came to build for Peter, then Elizabeth, Catherine, Alexander and more—so every major building in the city was created by a noteworthy architect. For example, the Catherine Palace at Tsarskoye Selo was built by Francesco Bartolomeo Rastrelli for Elizabeth in the Russian Baroque style, then expanded and embellished in the Neoclassical style by Charles Cameron for Catherine. St. Petersburg offers a lens you can look through that you don’t get in any other city—a fixed period that started with the Russian Baroque and then, after Russia defeated Napoleon, erupted in Neoclassicism, carried to the extreme. Everything became bigger and grander than what came before. That’s why everything we’re going to see there is special.

Related: Favorite Finds: What to Do in St. Petersburg 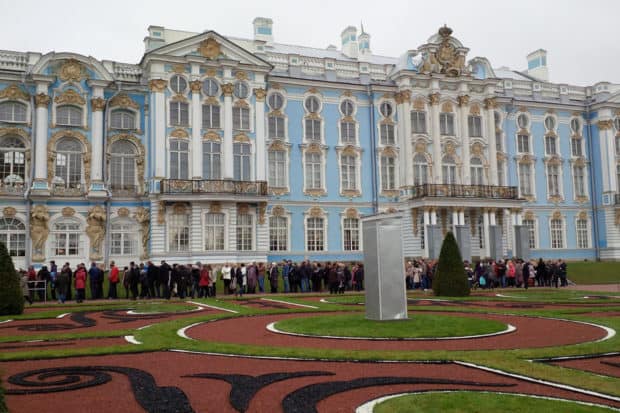 On our October Insider Journey to St. Petersburg, travelers will have the chance to skip the line for VIP entrance to Catherine Palace, with an invitation to privately tour the Amber Room workshops.

What are you most looking forward to exploring on the Insider Journey that you’re hosting in October?

HC: We’re going to see essential things like the Hermitage and Tsarskoye Selo, as well as places you wouldn’t always see on a regular trip there. For instance, we decided to focus one day on the works of Rastrelli and Andrei Voronikhin, one of the great Neoclassical architects who was born a serf, and who, legend has it, was a son of Count Alexander Stroganoff. The Rastrelli ballroom in the Stroganoff Palace is the only remaining intact room of its kind by that architect—and Dr. Sergei Kuznetsov, the museum’s director, will show it to us himself. We’re also going to do a tour at Catherine Palace that is private, which is essential, because there are always hordes of people there, and we’re going to be able to do a private tour at Pavlovsk on a day when it is closed to the public; there, we’ll meet with the chief curator, Alexey Guzanov, who is going to show us the palace. The only thing I’m worried about is that the curators are so excited to have us come—they might want us to stay the whole day, which would cause us to miss something else!

Another thing that I’m excited about is staying at the Hotel Astoria, where I first stayed 22 years ago. It dates back to 1912 and has been beautifully restored. It was built right across the street from St. Isaac’s Cathedral to host guests of the imperial family, and it still conjures the time of the czars.

The curators are immensely proud of what they have in St. Petersburg, because the city’s complicated history has created the art museums, the palaces, the music and dance that everyone celebrates now. When Maria Feodorovna was building Pavlovsk, with her husband Grand Duke Paul, she was so thrifty that, once she had the price she wanted for an item, like silk, she would order twice what she needed. Later when pieces were being evacuated to Siberia during World War II, curators would send one original chair for safekeeping—as well as all the extra silk. That’s why the restorations we can see today are so amazing—they’ve used all original materials. There are so many stories like that, which we will get to uncover.

“Petersburg is an architectural laboratory, built by the greatest architects in Europe over a 300-year period. Everything became bigger and grander than what came before. That's why everything we're going to see there is special.”