Sweden for Food Lovers: Why This Nordic Nation is a Midsummer Must

Midsommar, which marks the summer solstice and the beginning of summer in Sweden, is always a reason to visit. To inspire your future travels, we’ve asked some of the country’s top chefs their favorite Swedish Midsummer recipes—before you go.

Stockholm’s exceptionally beautiful Östermalmshallen food hall, dating to 1888, just re-opened this spring after a four-year renovation and is once again a must-see—and -taste!—stop for food lovers visiting Sweden. Such is its overabundance of just-picked ingredients and close-to-nature cuisine, though, that from Stockholm, in the south, to Lapland, 750 miles north, the entire country can seem like the world’s most beautiful and accessible food hall. And this is especially true once Midsommar, during the third or fourth week of June, annually, kicks off a beloved season of open-air dining. Despite its name, the holiday actually marks the eve of summer’s arrival—so here in plenty of time for the middle of this summer to come are ideas and recipes from chefs and hosts coast to coast. No other culture celebrates summer like the Swedes, and now you can, too, wherever July and August find you—without a daunting how-to list. Because of its emphasis on simplicity, the basics, and natural, locally found fresh ingredients, Swedish cuisine rewards the amateur. You might not be harvesting juniper and lingonberries in your garden (although you might find them at Whole Foods or a health food store nearby), so foraging for the ingredients might well be the hardest part of the recipe.

A word of warning, though. Asking a Swede about Midsummer dining is like asking an American about the Fourth of July—expect a lot of hot dogs, corn on the cob, watermelon, apple pie and ice cream in reply or, in their case, pickled herring, new potatoes and strawberry sponge cake. To the uninitiated that may not sound like a party, until the first bite, when it starts to taste like one—especially if you chased it with a shot of spiced schnapps!

In the last five years, West Sweden, with Gothenburg as its gateway, has emerged as the new foodie capital of northern Europe, with currently five Michelin-starred restaurants on offer alongside numerous more casual establishments. “What we like to eat in the summer on the west coast is…seafood, seafood, seafood,” says David, who serves as chef at Fiskbar 17, one of the city’s best new eateries, alongside Joel Sjoholm and Antonio Rossiello Schon. “Many people here spend their time by the ocean or in the midst of the archipelago—so our closeness to the fish and seafood dishes makes it more natural to enjoy them. Here is our recipe for a really traditional dish from Sweden’s west coast, fried Baltic herring.“

Place clean fish fillets in the marinade for several hours, or ideally overnight in the refrigerator (the mustard breaks down the small bones, and tenderizes the fish). Remove and coat each fillet with coarse rye flour; season fillets with salt and white pepper. Fry in melted butter until crisp and light brown on both sides.

Serve with mashed potato, lingonberries and cucumber (below).

Butter (for frying and as a sauce, for serving)

For seasoning, to taste:

Boil potatoes in an eight-quart pot, filled with water, until soft. Mix milk with grated nutmeg and bring to a boil. Whisk the hot potatoes, using an electric whisk or mixer, adding generous knobs of soft butter to taste (up to 1 stick-1/4 pound). Add the milk, until the desired consistency is achieved. Season to taste with salt, olive oil, tabasco sauce and lemon juice.

Sugar the lingonberries. Stir the berries occasionally, allowing the sugar to macerate the fruit and amplify the flavor of the berries. For best results, this can be done the day before and stored in the refrigerator overnight.

Brown butter, until it turns a “nutty” color. This will be served on top.

“To me, summer begins with midnight sun—and fresh salmon,” says Gunhild Stensmyr, whose Arthotel Tornedalen project combines accommodations with an art and cultural component and is one of Indagare’s favorite places in the dazzling Lapland region, on the Torne River near Sweden’s northeastern border. “On the Midsummer table there must be cured salmon, it’s that simple, and our recipe for cured salmon is very simple, too. We just mix equal parts of salt and sugar, with which we cover the fillets and add a little coarse ground white pepper. The oldest method to preserve salmon has been to salt it, and that is the origin of traditional cured salmon—gravlax. We place the fillets with the meaty sides together and leave them in the fridge for two or three days.  It’s the summer food of the gods.” Amplifying the national appreciation for salmon, chef Alexander Carnolf of Stockholm’s Skeppsholmen hotel offers his step-by-step curing preparation, adding that, “At the core of a lot of Swedish cooking today is the appeal of husmanskost (home-cooked) cuisine. We use only a few ingredients in each course and cook them with care—to keep the ingredients in focus. We cook with contemporary simplicity.” The Skeppsholmen, set on the island of the same name in Stockholm, mirrors that idea, with stripped-down simplicity that enhances the luxury of its quiet setting and minimalist interiors. 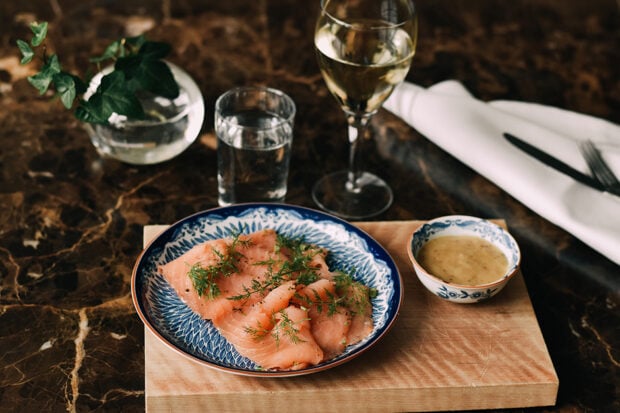 1 side salmon, pinned and peeled

3 tablespoons juniper berries (these may be found at Whole Foods, health food stores or a farmer’s market)

Crush juniper berries, white pepper and finely chop the dill. Mix together all ingredients and rub into the salmon side. Leave in the refrigerator and turn once a day for three days. Slice thinly and serve with a classic sauce, such as Hovmastar.

Whisk together all the ingredients except the cooking oil. Slowly pour the cooking oil into the mustard mix, while whisking. Beat well, so the mixture doesn’t separate.

“Midsummer brings more tradition to the table than our national day, or even Christmas, or New Year’s,” says Mathias, who runs two restaurants, the award-winning modern bistro Matbaren and vegetarian-focused Rutabaga, at the capital’s iconic Grand Hotel. “We celebrate the light, the sun and that summer and nature is at full bloom. Food is super-traditional and we eat outside—no matter what. For lunch, it’s pickled herring with new potatoes, sour cream and chives, followed by strawberry cake. At dinner, we put something on the [grill]. One good complement to almost any food, especially during summertime is pickled rutabaga—and not just because one of my restaurants is named for it!  But at Rutabaga we create dishes that can be a nice vegetarian add-on to the midsummer table since we always use seasonal produce. My cooking is all about trying to use as little technique as necessary to bring out the full potential of every ingredient’s taste, and this is one example.” 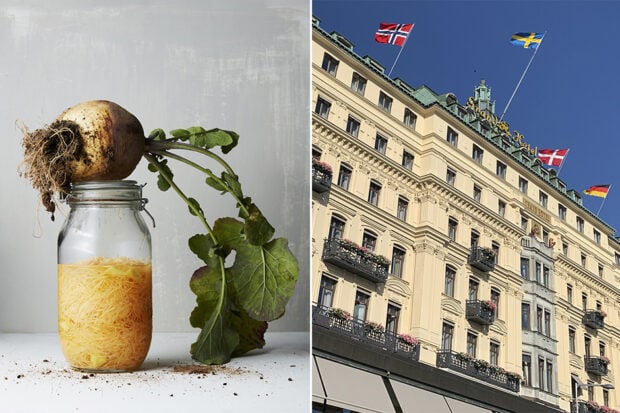 Set in the far south of the country, the Wanås estate is home to, among other things, a hotel, restaurant, outdoor art park and organic milk farm, and as this pile-up suggests, it offers a sophisticated, heady brand of hospitality that mixes cutting-edge design and aesthetics with Old World elegance and aristocratic heritage. You might then expect Chef Lind to favor a trendy mashup for his favorite summer dish, but his go-to could hardly be simpler, if au courant. “My favorite part about eating in the summer now is all the fresh vegetables available; it’s a luxurious time to find so much produce available and to go foraging in the wild.”

“The trend here for sure is eating more veggies,” says Linus’s colleague for the season, Emma Shields, Wanas’s guest summer chef. “Before you could see loads of meat on the grills all over the country, but now everyone is grilling vegetables.”

2 young onions, cut in half lengthwise

2 tomatoes, cut in half

7 ounces good ricotta (make it yourself, if you have a milk farmer close to you and access to fresh milk)

Florets from 1/2 head of cauliflower

Grill the tomatoes slowly, Lightly oil and season the onions and cauliflower. Grill over high heat. You want to cook them fast to keep some freshness to them. Arrange the ricotta on plates with grilled veggies around it. Spread dill and sliced radishes over. Finish with browned butter.

And for dessert? No question: strawberry cake. “In summertime, all the vegetables and fruits we eat in Sweden are produced here—it’s nicer than imported groceries,” says Nicole, an executive with Ett Hem, the boutique hotel in Stockholm that has set a new standard for stylish hospitality in Scandinavia. “And our own strawberries are really the sign of summer. We often have this cake for Midsummar—it’s a light cake that consists of a two- or three-layer airy sponge cake, with whipped cream and strawberries. 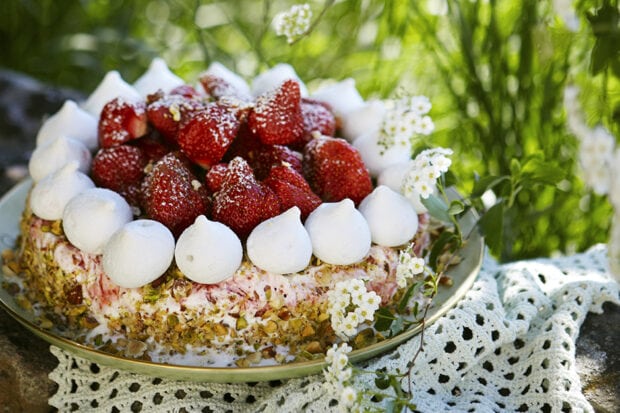 Whip eggs and sugar in a bowl until fluffy and airy. Mix all the dry ingredients in a separate bowl well ( make sure there are no clumps of baking powder). Melt the butter/margarine in a saucepan. Pour the flour mixture gradually into the bowl with the eggs and sugar, then add butter and water or milk until the batter is nice and even. Mix with a rubber scraper or spoon. Grease the baking form with butter and coat with breadcrumbs. Pour batter into a round (sponge) form pan.

Bake in the middle of the oven for approx. 40 to 45 minutes or when the cake is golden brown and passes the toothpick test (no sticky parts on it). Remove from oven and leave to cool. Once the cake has cooled cut it either into two or three layers. Alternate the layers starting with the mashed strawberries and cream mixed. Repeat until the final layer of sponge has been placed on top. Cover the final layer with whipped cream and decorate with strawberries or berries of your choice. 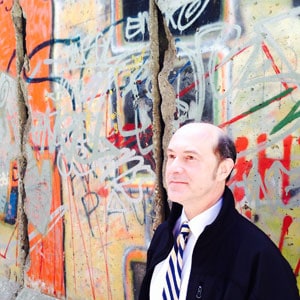