Where to Go in Sweden Beyond Stockholm

Here’s our guide to the places we love in Sweden, outside its beloved capital.

When envisioning Sweden, it’s easy to jump right to Stockholm, the country’s gorgeous, eco-friendly, design-forward and culinary mecca of a capital. And while Stockholm is one of Europe’s great cities to visit, it’s far from the only side of Sweden—a country spanning nearly 1,000 miles north to south, larger than Italy and the United Kingdom combined. “Sweden has the cities, yes, but it also has the mountains, lakes and the Baltic Sea,” explains Karin Drakenberg, who moved to the United States from Stockholm to start the global cultural movement firm Strawberry Frog 15 years ago, and who usually goes back two to three times a year.

To Drakenberg, one of the main Swedish attractions, especially in the summer, is the Stockholm Archipelago, a cluster of more than 20,000 islands up and down the coast east of the city. “It’s a very rustic, very pretty and very easy lifestyle out there,” she says. “You arrive on your boat and anchor up at any cove, and there are great restaurants and beautiful beaches. It’s my favorite place.”

Here, we take a look at the best places to go in Sweden beyond its capital. From the archipelago to the rugged northern mountains, each of these destinations showcase the same qualities of the country in their own way: They’re noticeably environmentally conscious, prioritize local, high-quality food and showcase a captivating mix of tradition and forward-looking design.

“My heart belongs to Sweden,” says Drakenberg. After visiting these seven regions, yours just might, too. 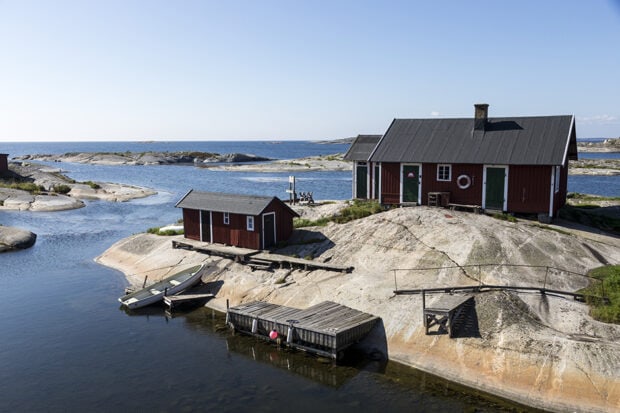 An island in the Stockholm Archipelago. Photo by Henrik Trygg, courtesy Visit Sweden

Just beyond the city limits, the archipelago is one of Europe’s most serene corners. A photogenic blend of rocky coves, sandy beaches, forests and historic fishing villages, it’s where Stockholmers head for easy weekend escapes, all via a large network of water taxis and ferries or on their own boats. Swedish law dictates that anyone has the freedom to roam in nature, regardless of land ownership, so it’s common to stop for a picnic or afternoon nap wherever the view is best. Culture buffs will want to stop by Artipelag, a massive, contemporary cultural center camouflaged amongst the pines on the island of Värmdö, about 90 minutes from Stockholm by boat.

Where to stay: Design fans in search of a chic, nature-focused getaway should opt for Island Lodge, a luxury tented camp on its own island about 40 minutes outside of Stockholm. Scattered throughout the pine forest, its seven tents showcase quintessential Scandinavian style with a wood-burning stove and beds—topped with Swedish linens—as the sole décor. They’re also a study in sustainability: with limited electricity, eco-friendly bathrooms, and locally-sourced produce (plus, the property is carbon neutral through an offsetting program). 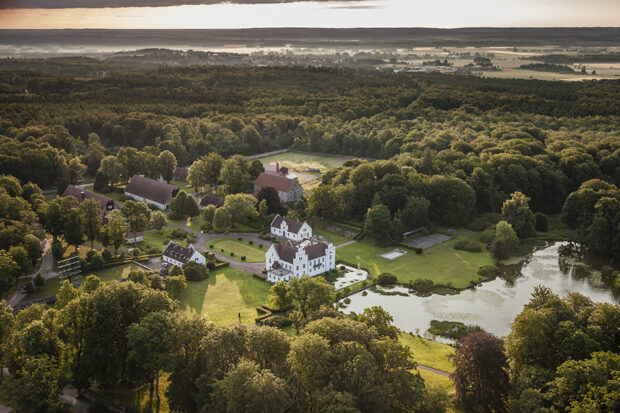 Wanas in Skåne. Photo by Per Pixel Petersson, courtesy Wanas

Sweden’s southernmost province is a pastoral, agricultural region, where stands of beech trees separate grain and rapeseed fields. Its milder climate, proximity to Denmark and distinct geography—the rest of Sweden is much more forested and mountainous—give Skåne a unique local culture, evident in its dialect and architecture. Malmö is the province’s largest city, but we love to explore Skåne’s smaller towns, such as the beautifully preserved Ystad—with more than 300 half-timbered houses dating to Medieval times.

And on Skåne’s west coast, the Bjäre Peninsula is another contender for idyllic Hamptons-esque vibes, attracting the nautical set to its boulder-lined coastline and quaint villages, such as Torekov. The peninsula’s main town, Båstad, hosts the Swedish Open tennis tournament every summer.

On the Bjåre Peninsula, Torekov Hotell and Hotel Skansen are two great options for style-conscious spa lovers. The former is in a modern residential neighborhood just outside of tiny Torekov, while the latter, on the Båstad waterfront. Both feature full spas—Hotel Skansen’s cold bath is at the edge of a pier, 300 feet into the sea—and locavore-focused restaurants. 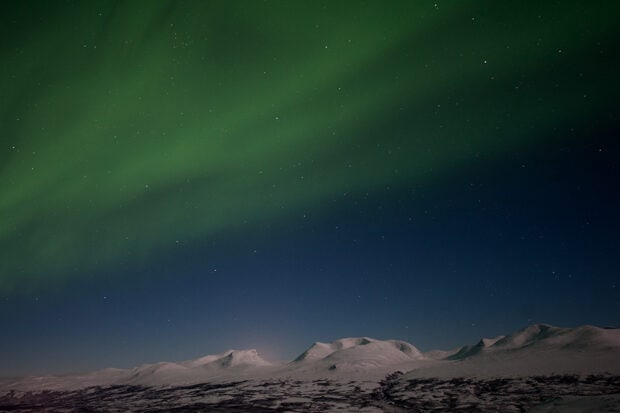 Europe’s last remaining true wilderness, Sápmi is vast, remote and varied, spanning across northern Scandinavia. Its 42,000 square miles in Sweden are home to towering peaks, ancient forests, windswept tundras, free-flowing rivers and, yes, reindeer. Famous for its icy winters, when temperatures plummet and Northern Lights dance across the night sky, Sápmi is also a must-see in the summertime. Technically low-season, the warmer months bring 24-hour daylight above the Arctic Circle, and are the best time of year for hiking and wildlife viewing. It’s even possible to ski or golf under the Midnight sun!

Where to stay: A clutch of design-focused, sustainable hotels in Sápmi make ideal home bases, no matter the time of year. At Treehotel, different architects constructed seven unique treehouse rooms, suspended in pine trees. This past year saw the opening of Arctic Bath, a floating hotel with a spa—set inside a circular ring lined with timber—and contemporary cabins perched over the Lule River. More than 250 miles to the northwest, Niehku Mountain Lodge has transformed a 1902 railway workshop into a stylish hotel with a minimalist yet inviting drawing on local Sami culture, the building’s heritage and its natural environment. It’s also the world’s northernmost heli-ski lodge, giving guests access to more than 60 nearby peaks. And each year starting in September, the lodge places visitors in one of the best spots in the world to see the Northern Lights, near light-pollution-free Abisko National Park. Another unique option: Icehotel, which first opened as an art gallery inside an igloo in 1989 and soon became the world’s first all-ice hotel. Now, the hotel has renovated its original 18th-century homestead’s sauna, inviting travelers to take in icy plunges in the Torne River after traditional Swedish treatments. 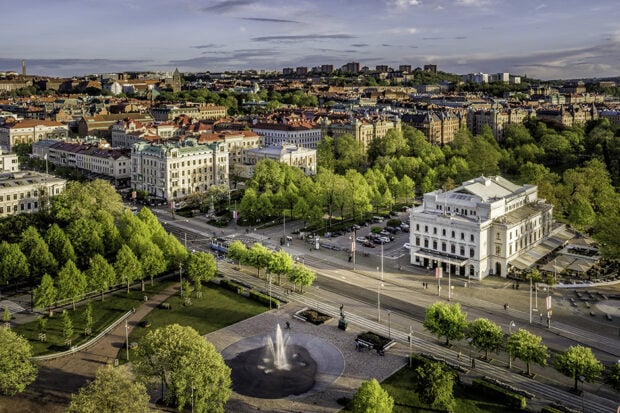 Historically, Sweden’s second-largest city was a strategic port, passing between the Dutch, Danish and Swedish control and providing important access to the North Sea and Atlantic. Today, the university town with an entrepreneurial bent, is still an important trading center and cultural hub, with a beautiful historic district—surrounded by a tree-lined canal—and expansive parks. Cyclists have an extra reason to head to Gothenburg: it’s the terminus for Kattegattleden, the country’s first national bike route. Opened in 2018, the mostly paved path spans nearly 250 miles from Gothenburg south along the coast.

Where to stay: On a cobblestoned side street, Dorsia Hotel stands out among Gothenburg’s hotels—and not just because of its red exterior. Its 37 rooms throw minimalism out the velvet-curtain-framed windows, opting instead for a Belle Epoque-meets-contemporary vibe, with bold colors and patterns, tufted furniture and antique artwork. 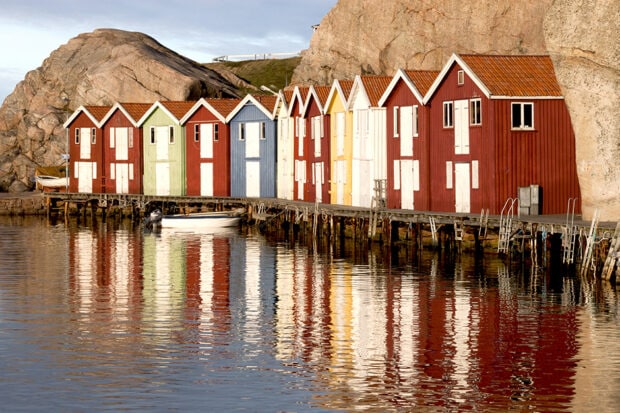 Stretching from the Norwegian border south to Gothenburg, the Bohuslän Coast has rocky coves and inlets, colorful villages and dreamy sunsets over the Skagerrak Strait. One favorite stopover: the tiny town and island, Marstrand. First a prominent fishing town in the 1600s, then one of Europe’s dominant free trade ports and then a fashionable summer resort for Swedish royals in the 19th century, Marstrand is now one of Sweden’s most charming coastal destinations, and it draws the chic yachting crowd year after year. The tiny town, with its grid of stately, terracotta-roofed buildings, only occupies about a quarter of the island, the rest of which is undeveloped, with boulders and low-lying shrubs and panoramic views of the sea.

Where to stay: From its prime location on Paradise Park overlooking the harbor, Grand Hotel Marstrand has been the place to stay in town since opening in 1892. Its 23 rooms, each individually decorated, blend turn-of-the-century elegance with up-to-date comforts. Ask for one of the suites, which have sea views from their ornate wooden balconies. Other hotels in Bohuslän we love: the pint-sized Ladfabriken, a rustic, four-room house open for takeovers inside a former crate factory on the waterfront of Orust Island, an hour north of Marstrand; and Gullmarsstrand, a sleek, seaside glass-and-steel structure with the region’s best spa. 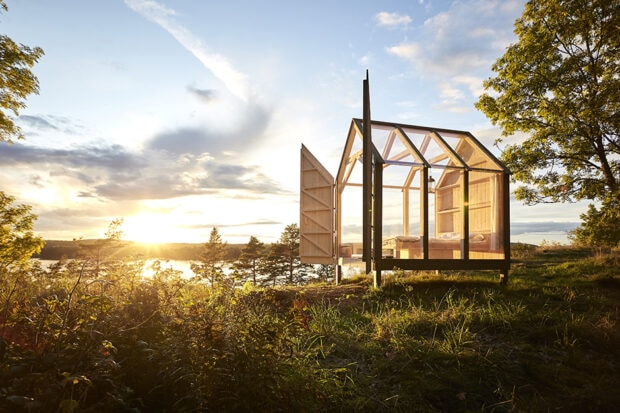 Dalsland, Swedish for “Valley Land,” spans from the western shores of Lake Vänern—one of Europe’s largest—to the Norwegian border. More than 1,000 smaller lakes and ponds interrupt the province’s dense blanket of forests. And with few towns and only 50,000 residents, it’s an ideal destination for those looking to avoid the crowds and enjoy the great outdoors, be it canoeing, biking, hiking or simply admiring the view (and watching the occasional beaver or moose walk by).

Where to stay: Since 2017, 72 Hour Cabins have welcomed guests to their secluded, glass-and-timber cottages for three-night stays at several scenic lakeside perches throughout Dalsland, including on a private island, a secluded peninsula or in the middle of the woods. The one-room cabins offer total privacy—which is important, given their see-through design—and easy access to some of the region’s most beautiful lakes and hiking opportunities. 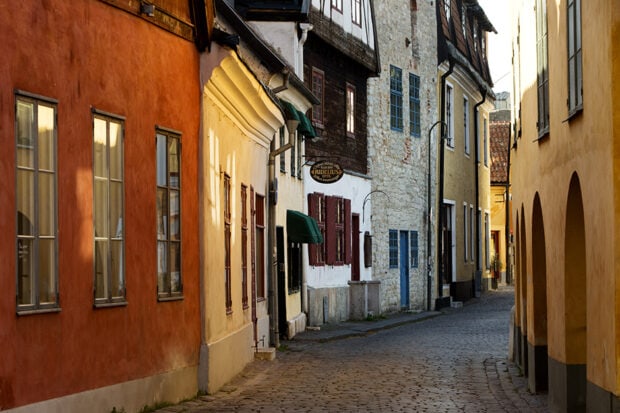 A three-hour ferry southeast from Stockholm takes travelers to Gotland, Sweden’s largest island, stretching more than 100 miles long and 30 miles wide in the middle of the Baltic Sea. More than a third of the island’s 60,000 residents live in Visby, on Gotland’s western shore. A UNESCO World Heritage Site, it is Northern Europe’s best-preserved fortified town, owing to its history as the mercantile hub for the Hanseatic League in the 1100 to 1300s. Visby, and Gotland at large, are a rising destination for eco-conscious gourmands, who have discovered the island’s excellent, fresh-caught seafood and locally-grown produce.

Where to stay: For a taste of Gotland’s foodie scene, Stelor is a working farmhouse 25 minutes south of Visby dating to the 1820s. The seven individually decorated, airy bedrooms make guests feel as if they’re at their own countryside home, albeit one with a first-rate restaurant serving authentic, sustainably grown foods (house-pressed apple juice in lieu of imported orange juice, at breakfast, for example). Menus change daily, and the restaurant and hotel are only open Midsommar through August. In the mood for something even further off the beaten path? Furillen Hotel, on a barren peninsula on Gotland’s east coast, occupies a former limestone quarry. Its industrial-chic bedrooms and dining room overlook the Baltic Sea.