The Importance of Place: Talking to Zita Cobb

The Fogo Island Inn might live in a spot that is “far away from far away,” but Zita Cobb, the brilliant creator, has developed a plan to connect it to the world. Cobb, who was born and raised there, has single-handedly revived the Newfoundland island and is steadily making a case for how this utopian-style community not only can work, but that it should be the model for future developments. After returning from a visit (read the hotel review here), Indagare’s Amelia Osborne had the opportunity to speak with Zita about the property, the importance of place and the concept of remoteness. 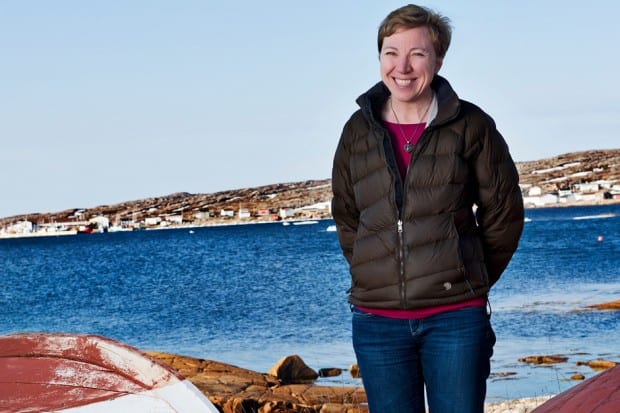 From a big-picture perspective, what is the Fogo Island Inn?
Our project asks a big question: how do we belong to the world? Whether you are a person or a community: how do you fit in in a way that has integrity; how do you become a whole person; how do you ensure that you aren’t just moving in and out of projects. We live together in a world that is out of balance. If you want to be really extreme about it, our world is on fire, and we are sadly both victims and perpetrators. We are living in a time of globalization, virtualization, urbanization and conglomerations, and priorities are out of order. We need to figure out how to make the world work within some idea of human communities.

Visiting Fogo Island made me think about the idea of place and the importance of understanding place—in the world, country, community.
Knowing your place deeply, feeling committed to it and not treating it like a commodity is part of belonging. If you don’t know where you are or what your home or community is, then you cannot be a good participant in life. I love a poem by the New Zealand poet Glen Colquhoun called The Art of Walking Upright. He writes, “The art of walking upright here/ is the art of using both feet./ One is for holding on./ One is for letting go.”

The Fogo Island community is more aware than most. Making furniture and quilts for the inn was incredible—every time we picked up an antique, it led us to a bunch of objects that we had almost forgotten about. The ShoreFast Foundation has put a lot of effort into teaching locals about geology because Fogo Islanders have cultural relationships with rocks, but we wouldn’t know granite from shale. It has helped us grow deeper in our knowledge of the place.

Our work also involves trying to foster an attitude towards business as a tool in the community. Business people don’t have to wear suits; we can have businesses that don’t fit a formula. In fact, fishermen are naturally deeply entrepreneurial people, but Fogo Islanders were not used to taking market risk. 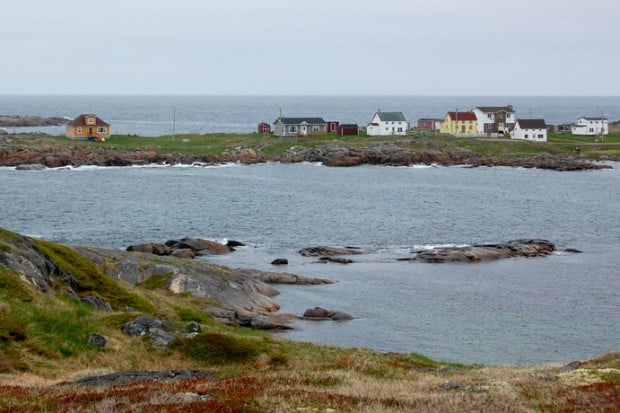 Perfectly square Saltbox houses are the typical style of homes throughout Newfoundland.

You spend about half your time traveling and the other half on Fogo Island. What is your life like on island?
My house is a kind of heaven. It was built by my uncle in 1920 and he left it to me. That little house has been moved many times, but I hope it will never move again in my lifetime. I also have the great benefit of living behind the island’s ice cream shop.

When I’m home, I run trails like Watermans Brook in the morning and see my friends in the afternoon at the Inn. I like to be at the inn from about 4-10pm as I like to be there when guests are coming back from outings.

I try never to leave the island in the fall because I’m a big berry picker and spend all of my free time on the hill picking partridgeberries. Winter is really great there because I love to snowshoe and ice skate on the ocean. Salt water ice doesn’t freeze as hard as fresh water ice so skaters don’t move as fast; it feels like skating in slow motion. Like everything that’s slower, it is nicer. 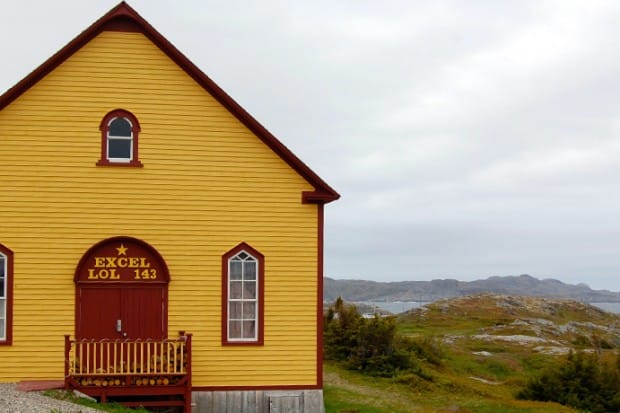 Winds and Waves is a cooperative that showcases and sells artisan’s works, including quilts, handsome wooden cutting boards and knitted socks and mittens.

Can this community-focused initiative you created on Fogo Island could work elsewhere in the world?
I think that everywhere on earth, humans live in the local and our lives are deeply intertwined. We don’t want to live in a market society, which is why I think art is so important. It is as simple as asking what do we optimize for, as a human being and as a business. If you develop something with the importance set on the concept of community, it’s going to drive a lot of different behaviors than if you just optimize for return on financial capital.

One can’t help but think about Cuba, another formerly isolated island not too far from the U.S. that will soon have to deal with globalization and an extreme rate of growth.
Whatever business model works for very big places doesn’t work for little places. The smaller destinations get flattened. I’m a big fan of trading the ownership of assets when in a small place. Especially when dealing with a place that has been living in economic poverty and political isolation for so long, they will otherwise be crushed quickly.

I think this idea of community-based, sustainable tourism that is inspired, developed, run and owned by the people who live there belong everywhere.

We are losing small places, so I think either at the provincial or state level we should be looking after them, understanding that they are important to our national or provincial values and identity. The north coast of Spain inspires me in this fashion, as they’ve done a brilliant job of creating financial assets and building in cultural value. You can’t stay in a hotel or have a meal there without having a really deep, culturally vast experience. I love that.

If you were to open a new property some time in the next five years, where in the world would you go?
I would tend to work where I know best which would be a Canadian Artic for example. It would be amazing to do something on Baffin Island, allowing people to get a real education about the Arctic.

Getting there will be a challenge, like for Fogo Island, but sometimes I think we’ve become a little too comfortable with expecting to get on the plane and two hours later pop out in Orlando or something. Remember when people used to take ocean passages to get to places? 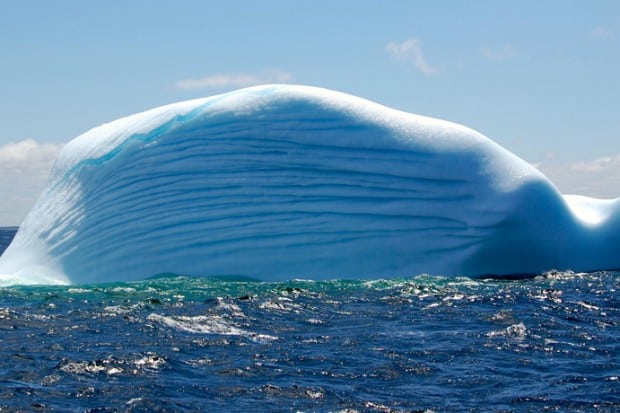 From early May through the end of June, the Labrador Current, which flows off the north coast of Fogo Island, brings floating icebergs.

I think that’s part of the appeal of Fogo Island, if it were easily accessible, guests wouldn’t get as much of a sense of the remoteness.
How sad would life be without the idea of the remote? The time it takes to get from a special destination back home is where the magic happens in our virtualized, speedy, chopped-up world. Our lives don’t feel our own because they’re so fragmented from the onslaught of too much information and having too many things to do. People live in fear of being bored.

I get the question, “what do you do there” a lot. You can go fishing or just for a boat ride, go berry picking, hiking, but being there is not about the activities. Some people need the back-to-back schedule, terrified of being bored.

We had a woman last summer who broke down in tears on her third day. She tried to explain what she was feeling, but couldn’t quite come up with it. As she was leaving, she said she had finally figured it out, why she felt so emotional here, was because it reminded her of when I was eight years old. She said “I felt whole in myself and like I was part of the world. I see my place in it and it feels good, just like when I was a child.” She had forgotten that feeling, instead believing her life is not her own. Fogo Island is a community that’s whole in of itself. If the rest of the world ended, Fogo Island would carry on the way they have for 400 years. Same with Cuba—islands have a completeness unto themselves.

Islands are metaphors for us. We are islands and the ocean is the eternal, constantly moving. It’s one thing to be on a harbor or a bay but another to be on the Atlantic, which is inherently harmonizing. It offers the sense that there is something bigger that transcends all the frailties of our lives. The north Atlantic in particular is one of the great wildernesses. Author Paul Theroux once wrote: “as long as there’s wilderness, there’s hope.” You feel the ancient knowledge on the rocks in front of the inn, as they’re 420 million years old, and it makes the curtain between here and there feel quite thin.

I would say that Fogo Island puts us in our place. The best line I’ve ever heard about the place is from a Newfoundland musician, Alan Doyle, who said “it’s like a place that you can’t believe but always hoped existed.” It has a wholeness, a sort of hanging on kind of feeling.

Read Indagare’s article on the Fogo Island Inn and contact our bookings team to arrange a visit.

“Islands are metaphors for us. We are the islands and the ocean is the eternal... Constantly moving.”