The Up-And-Coming Mexican Town You Should Know About

Modern travelers are on an endless quest for authenticity, hungry to find the undiscovered gems that stand out in an ever-globalizing world. In Mexico, travelers are drawn to destinations like Oaxaca and San Miguel Allende, seeking the ‘real’ Mexico: where the tacos are excellent, the beaches are empty and the visitors are few. But as tourism increases—The New York Times named Mexico City the world’s #1 destination in 2016, and the country saw a record number of visitors in 2017—so do rumors that the charm of these places is diminished by their rising popularity (some argue that this is the case with Tulum, for instance). And while this correlation is inaccurate, there is nonetheless nothing more exciting than visiting a destination on the cusp of discovery.

Located a two hours’ drive south of Mexico City, the Spanish Colonial town of Puebla has all the makings of Mexico’s next big thing: there’s superb street food, with fresh tortillas served from straw baskets on every street corner; Instagram-worthy architecture and pastel-painted buildings as far as the eye can see; and enough open-air markets to satisfy even the pickiest shoppers. But the city, which is Mexico’s fourth largest, happens to be one of the country’s most important economic hubs and is therefore decidedly cosmopolitan. The bustling downtown contains sleek museums and contemporary architecture within its UNESCO-protected walls. The result is not your typical south-of-the-border destination, with a rich tapestry of influences, from Mayan to modern to Spanish Colonial. This is a place where grand boulevards meet hole-in-the-wall taco joints, imposing monuments shade colorful markets, and trendy streetside cafés abut colonial mansions. Plus, a luxury hotel has arrived on the scene, establishing Puebla as one of Mexico’s best-kept secrets—and a city worth knowing about. 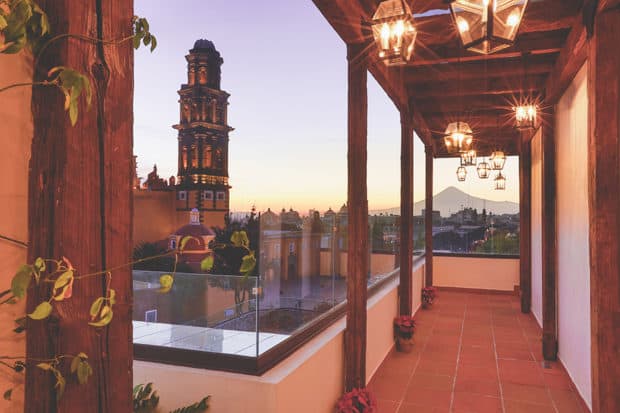 Azul Talavera’s rooftop. The best time to visit is at sunset for the view of Puebla, which is illuminated in a deep ocher glow.

To understand Puebla is to understand its history, and this can be done by exploring the city’s cobblestone streets. When I visited, within just a few blocks I had received a crash course on Puebla’s proud heritage, starting with a stroll down the town’s main avenue dedicated to the Battle of Puebla, when the Mexican army beat the French on a fateful day in May (aptly named Boulevard Cinqo de Mayo). We passed church after church, dome after dome, each brighter and more colorful than the next, past sites of grand historical scale. Most notable was Bibliotheca Palafoxiana, the first library in the Americas; and the Rosary Chapel, a gold leaf-clad jewelry box of a cathedral that is perhaps the best example of the city’s deeply-rooted European history. As my guide explained, Puebla is the only city in Mexico that was founded specifically for the Spanish Colonialists—hence its name, the Spanish word for ‘town’—and thus oozes with European influence. In Puebla’s main square, for example, one look at the polished, tree-lined boulevards and shopping arcades transported us to the streets of Barcelona or Paris. 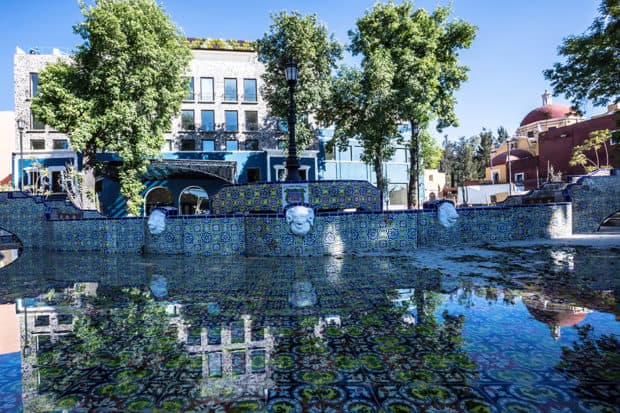 A tiled walkway in Puebla’s downtown; the city is famous for a special type of ‘talavera’ ceramics.

By mealtime, however, we were back in Mexico. Street food here is superb, some say the best in the country. My guide introduced us to several of his favorite vendors and we eagerly sampled local fare including chalupas, a type of fried dough filled with salsa and veggies, and molotes, a corn pastry with shredded chicken—not to mention the ubiquitous tacos served from straw baskets on every street corner. But Puebla’s culinary scene is not limited to streetside samples: in fact, the city is fondly known as the ‘Kitchen of Mexico’ (just ask a local) thanks to its status as the birthplace of mole, the 40-ingredient sauce used in myriad Mexican dishes. Mole can be found at seemingly every eatery in town. And while the sauce, which contains chocolate, garlic and peppers, is an acquired taste, sampling is mandatory. Not mandatory is a taste of the crickets, which are considered a street food specialty when fried with lime and spices, that are likewise ubiquitous. 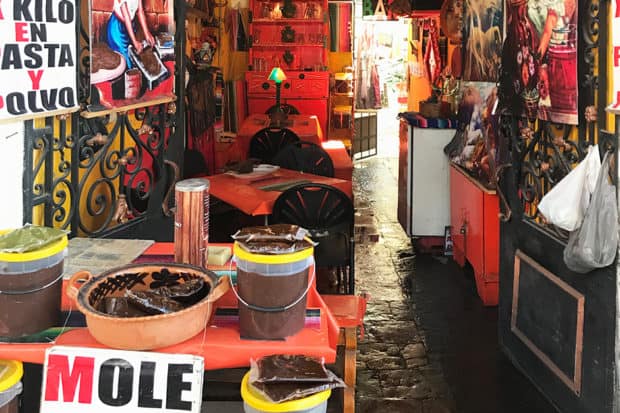 Inside a mole café. Puebla is fondly known as the ‘Kitchen of Mexico,’ thanks to its status as the birthplace of this 40-ingredient sauce.

The mark of an up-and-coming destination is often the arrival of a luxury hotel, and Puebla recently welcomed a trailblazer to its historic downtown. Azul Talavera opened as a Rosewood in early 2017 and has established itself as a modern classic, mostly because every inch of the hotel is a thoughtful celebration of the city that surrounds it. Set in a series of 17th-century private homes, the property is a veritable historic marvel and thus carried with it lofty design restrictions from the preservation society. But thanks to the efforts of Eric Meza Leines, a rising architecture star known for his passion—and razor-sharp talent—for restoring historic structures, the resulting design is flawless. Puebla’s tapestry of influences is on full display at the Rosewood: think ancient stone walls framing contemporary local artwork; 17th-century frescoes complementing sleek furnishings; and traditional Mexican buildings decorated with ultra-modern sculptures. The hotel’s wow factor is not limited to aesthetics, however, as the Rosewood counts a full-service spa and three excellent restaurants on its list of temptations. The pièce de résistance is a chic rooftop bar that overlooks the cathedral-topped city: the perfect place to savor a margarita (or two).

In the travel industry, there are buzzwords and phrases that are often overused. ‘Culturally rich’ is one of them; the aforementioned ‘authentic’ is another. But visiting Puebla, I felt like I was seeing a gem of a destination before the rest of the world caught on—which was underlined by the fact that few of my friends had even heard of it. By the final day of my stay, I understood why the locals shared such a resounding message. Puebla, I was told, captures the spirit of Mexico itself: a place that is vibrant, dynamic and also deeply traditional. On any given Saturday, the city comes alive with locals emerging from church, busily running errands in the open-air market or savoring mescal with friends, all unfazed by the occasional tourist nearby. At night, both visitors and locals worship the bright sunset, when the city is illuminated in a deep ocher glow and the church steeples light up like exclamation points on the horizon.

It is perhaps these colors that I remember most from Puebla: the light yellow of the church where girls in white dresses spilled out from Communion; the emerald and lavender homes sitting beside each other like a Pop Art painting; the bright red of the spicy pepper mixed into mole. These colors make Puebla a city that I, and most travelers, won’t soon forget.

Related: Why These 7 Places Are Perfect For an April Getaway 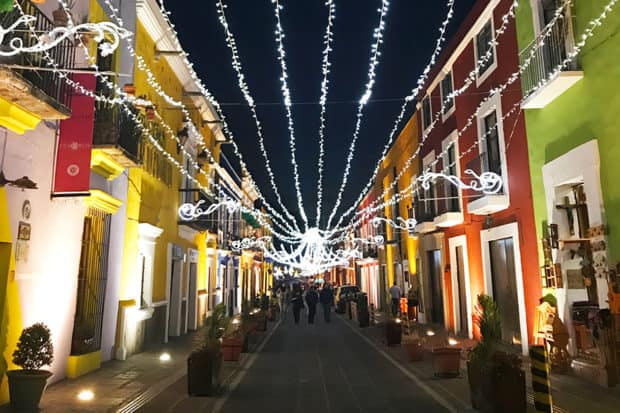 Where to Stay: The 78-room Azul Talavera is an exquisite and authentic resort located in the heart of Puebla’s historic downtown. Resort amenities include three restaurants, a spa, fitness center and rooftop bar with glorious views of the city.  At a slightly lower price tag is the nearby Hotel Cartesiano, located in the heart of the boho-chic Artist’s District. The 78 room-hotel has sophisticated, historic-meets-minimalist design, a rooftop pool, two excellent restaurants and an ultra-modern spa.

Who Should Go: Culture hounds and travelers who appreciate up-and-coming locales. Those interested in Michelin-starred restaurants, full days of cultural tours and adventure activities should combine Puebla with Mexico City or a nearby beach destination. Read Mexico’s Best Beach Resorts for inspiration.

Contact Indagare to book a trip to Puebla. Our travel specialists can match you with the right hotels, plan great meals and activities and organize behind-the-scenes access.