Newport, RI: Where to Stay, Eat and What to Do

Known as “America’s First Resort,” Newport has set itself apart from New England’s other seaside enclaves for nearly four centuries. This distinction is in part due to its gilded history—this is the home of extravagant mansions like The Breakers, the 70-room summer home of Cornelius Vanderbilt —and longtime status as a sailing mecca. But despite its elite past, Newport is (and Newporters are) far from stuffy: at its heart, the low-key harbor town remains delightfully traditional, populated by crab shacks and family-owned restaurants in place of the trendy establishments found in the Nantuckets and Southhamptons of the world. After all, this is a year-round destination, with tourism flourishing well beyond the summer. Read on for where to stay, eat and what to do in Newport.

Where to Stay in Newport 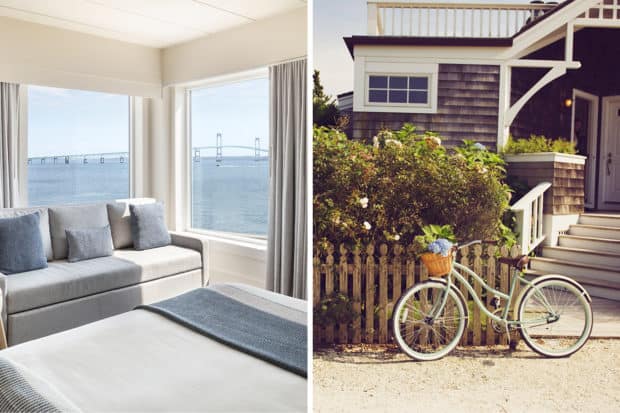 A room at Gurney’s in Newport; a cottage at Castle Hill Inn

Like the town itself, hotels in Newport embody New England at its most idyllic. Outside of town, couples and groups should opt for the Castle Hill Inn, a windswept, shingled mansion with its own private beach overlooking Narragansett Bay. The rooms are straight out of a Ralph Lauren catalogue and the restaurant is a destination in itself; but the real allure is the lawn, which is one of the best places in town to savor cocktails overlooking the sea. For people who want to be in walking distance of all of Newport’s attractions, the Vanderbilt Grace is a historic mansion with the impressive amenities of a resort (including an indoor pool, roof deck and award-winning restaurant) along with the coziness of a boutique hotel.

The latest news in town is the opening of Gurney’s Newport, an addition that brings a heavy dose of trendiness to Newport’s aforementioned lack thereof. An outpost of the popular Montauk hangout of the same name, Gurney’s is a hotel complex on its own island, complete with 250+ rooms, a spa, multiple dining menus and a chic crowd of summer visitors. The property is only a ten-minute taxi ride from Newport, and has its own 22-foot marina, sailing school and indoor/outdoor pool. Read Indagare’s review.

Related: Summer Escapes from New York: 5 Resorts Near the City

Where to Eat in Newport 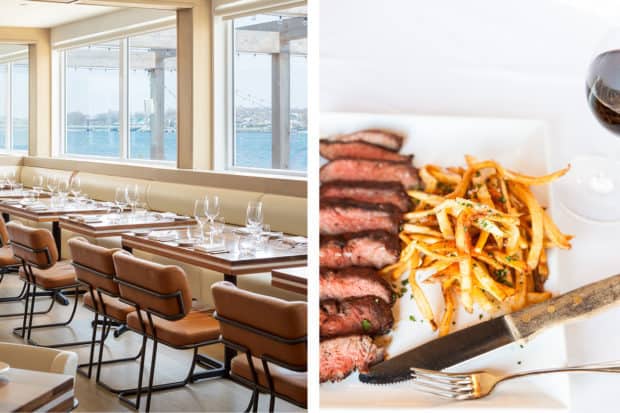 From Del’s frozen lemonade to “stuffies” (stuffed clams) and lobster rolls, Newport has its own cuisine that is hugely celebrated. With over 1,000 farms within a 50-mile radius, produce is as fresh and delicious as the seafood that comes off fishermen’s boats on the wharfs. Highlights include clam chowder and the types of large clams called quahogs (pronounced co-hog).

For Lunch
First-time visitors should post up at The Black Pearl, a waterfront-dock-turned-fine-dining establishment, where cocktails, freshly caught lobster tail and people-watching make for a quintessential Newport afternoon. On the slightly more upscale side is 22 Bowen’s, an excellent new-American restaurant with lovely views of the harbor. For a casual meal, Belle’s is popular for breakfast and brunch, and even New Yorkers rave about the lox bagels.

Related: Melissa’s Picks: Where to Go in September

For Dinner and Drinks
Ask any local where to go for a big night out and the unanimous suggestion will be the Clarke Cooke House, an institution in Newport that is just as famous for its dining options as it is for its late-night revelry. The 18th-century building houses multiple dining rooms, but favorites are the traditional Porch, with white tablecloths and green-painted bamboo chairs, and the ground-level Bistro, which is largely open-air during warm months. The SkyBar (at the top) and basement-level nightclub Boom Boom Room are the hottest drinks and dancing spots in town. Other favorites for dinner include Thames Street Kitchen, a local farm-to-table favorite, and 22 Bowen’s. And for a big night out, Scarpetta at Gurney’s is a standout for its festive atmosphere and exquisite Italian food.

What to Do in Newport 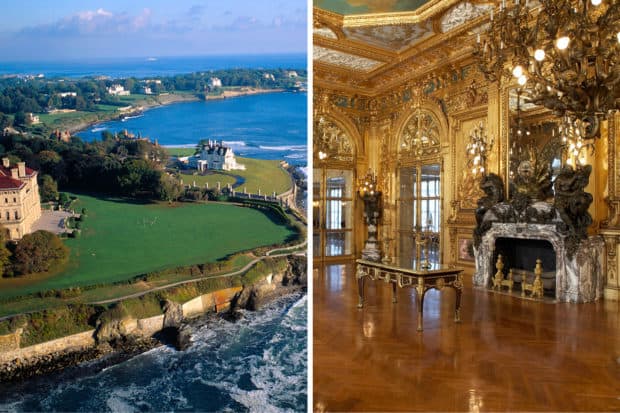 First-time visitors to Newport should start with the Cliff Walk, the three-and-a-half-mile walking trail that winds along the mansion-dotted shoreline, where walkers are treated to the glorious New England coast on one side and the extravagant mansions and grounds on the other. For those interested in a closer look at the small palaces, consider buying the Newport Mansion Experience pass, which allows access to five historic houses. But the main event for many travelers is Newport’s set of sandy white beaches. First Beach, or Easton’s Beach as it is commonly known, is a beloved spot for kayaking and surfing and, during the summer, has a snack bar that serves lobster rolls as well as a Del’s Lemonade truck. Gooseberry Beach sits on the southern end of the peninsula, closer to Castle Hill Inn and Bailey’s Beach. Second Beach is slightly less busy, set further east of town near the Sachuest Point National Wildlife Refuge.