Eleven floors above 57th Street and Fifth Avenue you expect to hear an ambulance siren, the honking of horns—the rush of the city below. But (thanks to serious soundproofing), sequestered in a corner suite at Aman New York—your very own modern zen sanctuary—you might have to look out the wall of windows to the Tiffany billboard across the street to be reminded that you are, in fact, in the heart of the city. From the moment you pass through the grand bronzed doors of the sleek recessed entry into the lobby of the gold-topped Crown Building, you will feel as if you have entered another world far beyond Manhattan… and into a new gilded age—one in which the ultimate urban luxury hotel reigns supreme.

So-called Aman junkies (and the rest of us) have long anticipated this particular hotel’s arrival. In advance of its recent members-only opening, a lucky few on the Indagare team got a sneak peek of the $1 billion-plus property, and we can attest that it was worth the wait (even if its rooms are some of the most expensive in the city—with premier suites starting at $3,200 per night). Inspired by the iconic brand’s resorts in Southeast Asia, Belgian architect Jean-Michel Gathy of Denniston (the design firm behind Amanzoe, Aman Venice, and other properties from many top hotel groups in the world) has reimagined the 1921 Beaux-Arts limestone tower that was once the original home of the Museum of Modern Art and later owned for a time by Ferdinand Marcos. With its historical forms, decorative details and Southeast Asian flair, it’s hard not to feel immediately transported to this other world when the elevators open to the double-height 14th-floor lobby and lounge, where Shanghai brick walls are layered with panel of papier maché-like Nepalese wallpaper and braided hemp designed to represent traditional southeast Asian basket weaving. The impressive space serves as the hotel’s hub, connecting guests to Arva (an Italian restaurant), Japanese restaurant Nama (with omakase-style dining), the lounge bar and the subterranean Jazz Club. Adding to the impressive scale is the 7,000-square-foot terrace with a retractable roof that brings in the light and provides a year-round indoor-outdoor space complete with reflecting pools, fire pits and a bar. Words that come to mind to describe this new hotel world wonder include: Monumental, minimalist, modern, scale-defying or more aptly—epic.

Contact your Trip Designer for more information about the right suites, special experiences on-property, the jazz club and more. 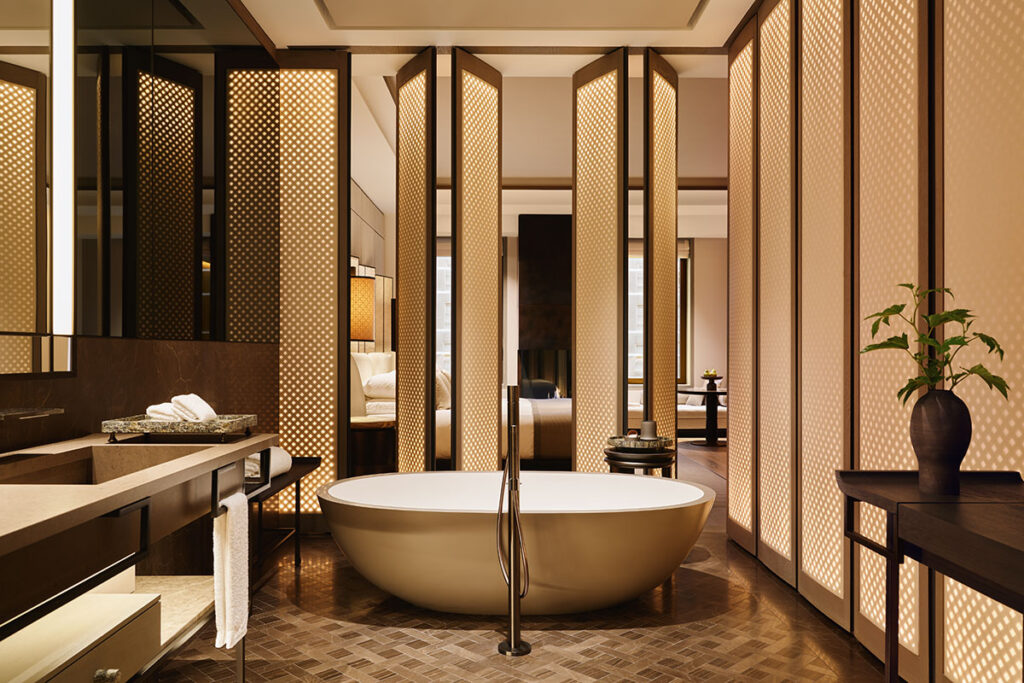 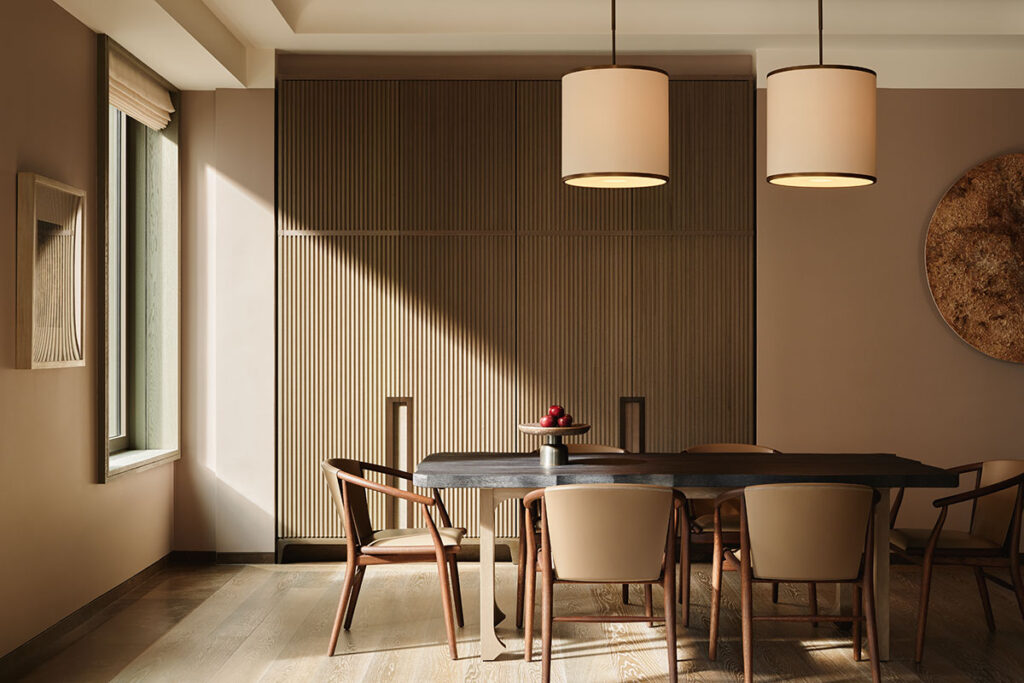 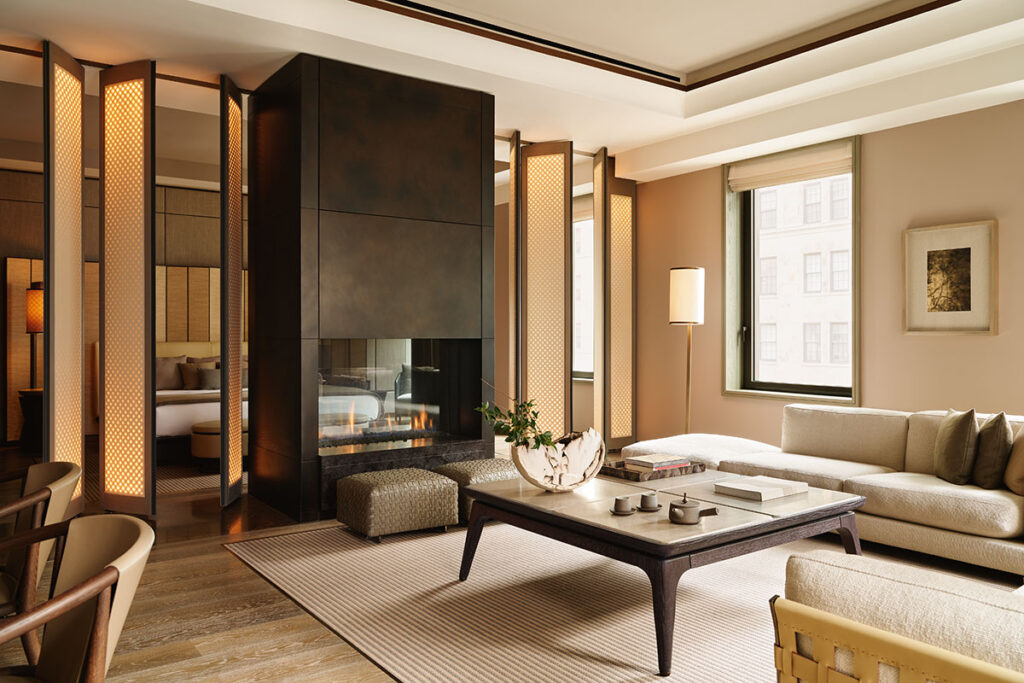 Aman New York’s 83 suites on floors seven through 12 start at 775 square feet, making them some of New York’s largest. They also come with functioning gas fireplaces—not something most city hotels can broadcast. And if hotel bathrooms are your jam, you will find nirvana here thanks to the enormous standalone stone oval soaking tubs, separate marble rain showers, Toto toilets and sleek double vanities. On floors 15-30, there are also 22 private condo residences, ranging from one to six bedrooms, with outdoor terraces, multiple fireplaces, chef’s kitchens and a penthouse with a private lap pool. Residents are part of the Aman Club, which offers exclusive access to two Club lounges, a private Garden Terrace, as well as a Cigar Lounge and Wine Room and a separate entrance on 56th Street. Initiation for the club for non-residents is now $200,000.

Attention to detail and minimalism are in evidence throughout the property, which will come as no surprise to those who have stayed at one of the 33 other Aman hotels from Utah and Wyoming in the U.S. to Tokyo and Thailand. Wide corridors are lit by stylish Balinese sconces—black metal circles that appear to float in the light of a square rice paper shade—set into recessed wall panels. (A circle in a square represents harmony and balance in some Asian cultures.) Hallway floors are covered with tatami-style runners, absorbing echoes and conveying otherworldliness. Each open-plan suite has double-pivot doors that function as adjustable partitions, suggesting a reinterpretation of a Kyoto ryokan (albeit with a few more creature comforts).

Contrasting textures, muted tones and the strategic use of backlighting are all at play in the suites and infuse calm and serenity into the ultra-modern spaces. Blinds are made from bamboo fibers. The large-scale custom murals by Japanese artist Ryoko Adachi pay homage to the 15th-century painting, Pine Trees, originally created on a six-panel folding screen by the premier Japanese artist of the pre-Edo period, Hasegawa Tōhaku. Slanted metal fire screens echo the 10-foot-high folding walls that can be adjusted to separate the living room from the bedroom and the bathroom. And you may never think the same way about pillows again after seeing five (or 10!) perfectly positioned silk squares in neutral tones artfully arranged on the bed to contrast with the headboard and the shoji-style folding screens lit just so behind it. Like ikebana, pillow-arranging here clearly involves training with a master. Books by Phaidon have also been carefully chosen as statement pieces, and fig plants and hops shoots sit in ceramic vases, bringing a hint of greenery (and life) into the rooms. By contrast, the spareness and order of the suites is offset by the hospitality and sense of duty and pride of the staff (if the pillows are any indication). The gracious team who greets you at the front desk in the lobby stands alert to attend to your needs.

Lending the sense that you can fully retreat from the world, the spa has been spread over three floors and, at 25,000 square feet, includes a Fitness Center with a Power Gym concept and the latest Technogym equipment, plus an infrared Zone—all for high-performance training. Guests can relax by the 65-foot-long heated indoor swimming pool, surrounded by fire pits and daybeds, or take advantage of the 700 square feet of outdoor space and two full-service “spa houses.” It also happens to be Aman’s flagship for integrated wellness in the Western Hemisphere, with banya (sauna) and hammam (steam) rooms, cryotherapy chambers, hyperbaric oxygen therapy and private outdoor terraces with hot and cold plunge pools, daybeds and fireplaces, resembling those at other Aman resorts. The spa is open to guests and Aman Club members.

Aman New York is now open to guests, residents and Aman Club members. Select suites are available for booking, with more opening to future guests this fall. Aman plans to expand to 40 properties and 22 countries, including Aman Nai Lert Bangkok next year and Aman Miami Beach in 2024. 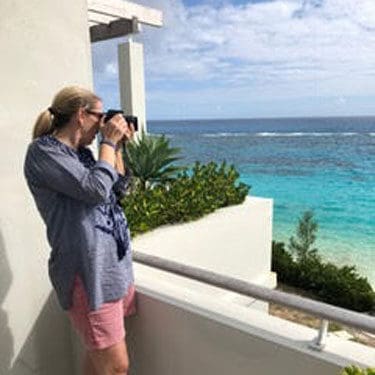 “From the moment you pass through the  grand bronzed doors, you will feel as if you have entered another world far beyond Manhattan… and into a new gilded age—one in which the ultimate urban luxury hotel reigns supreme. ”