It’s about to be summer in the city—and this week marks some exciting milestones for the Big Apple (which happens to be Indagare’s hometown, as well as this writer’s). As of May 19, the subway has returned for 24-hour service; masks are not required outdoors (and indoors, depending on the circumstance) for fully vaccinated people; and capacity restrictions have been lifted for the majority of businesses—including hotels, restaurants, bars, stores, museums, theaters, stadiums and exercise studios—provided that they maintain social distancing of six feet between patrons, separate patrons with solid partitions at least five feet high, or require proof of full vaccination status upon entry (or, in some cases, negative results from a Covid test; currently, 50 percent of the total New York state population has received at least one dose of a Covid vaccine, and 42.5 percent is fully vaccinated).

It’s been a long 14 months for the city that never sleeps, from the nightmares of total lockdown, to the dormant days when the world’s most maddeningly trafficked streets were unnerving in their emptiness—days when the lights went out on Broadway, doors shut for good at the 21 Club, Bar Sardine, Central Park’s Loeb Boathouse and countless others, and thousands of apartments and offices sat gathering cobwebs. But New York has nine lives, and its most ardent residents and devotees (including many of you, our members and readers) kept the magic alive through outdoor concerts and spinning classes, virtual museum tours and watching shows like Fran Lebowitz’s Pretend It’s a City, Friday night dinners in the West Village (huddled under heat lamps, in the snow) and happy hours at former scene spots (snacking on “Cuomo Chips,” in the bike lane)—as well as defiant slogans like “New York or Nowhere” and “New York Tough” (and, of course, zizmorcore).

Now, there’s light at the end of the (Holland, Lincoln, Midtown) tunnel—and, yes, the traffic is also back. Read on for the top hotel, restaurant and culture openings and reopenings that we’re excited about—plus, the city properties that are most popular with Indagare members—to start planning a style- and spirit-filled sojourn in NYC. 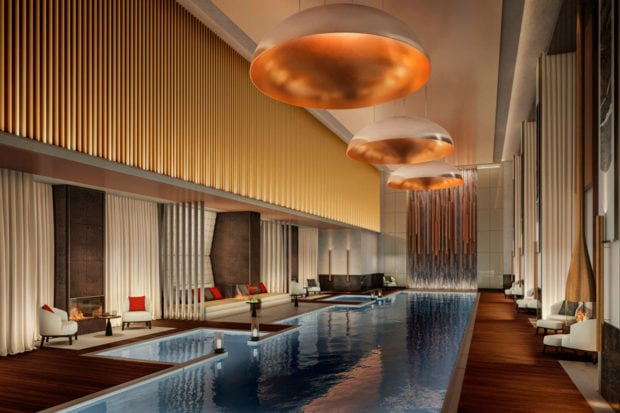 New York City grows ever upward, and (hopefully) this summer, one of its Gilded Age jewels—The Crown Building, erected in 1921 on 57th and Fifth, overlooking Central Park—will receive a new lease on life, in the form of Manhattan’s most exciting new hotel opening: the Aman New York. The former first home of the Museum of Modern Art, the building was extensively renovated by Jean-Michel Gathy and is slated to house 83 suites, as well as an underground jazz bar, a wraparound garden terrace with park views, Japanese and Italian restaurants, a wine library and a 7,500-square-foot, three-story, indoor-outdoor Aman spa with all the trappings (the pièce de résistance: an indoor swimming pool circled by fire pits and daybeds). The long-awaited project wants for nothing, with the perfect balance of historic reverence and dazzling novelty—a reflection of the city itself—and there will be plenty of locals snapping up long weekend dates for the ultimate staycation; for those who inevitably become completely enamored, there are also 22 private residences on the top floors.

Many of our existing favorites are reopening this month, with notable announcements including The Plaza Hotel‘s reopening on May 20 (reservations at The Palm Court are already hard to come by; blame Eloise); The Peninsula, set to reopen June 1; and The Ritz-Carlton, New York, Central Park, which will reopen on June 2 with redesigned guest rooms and two new dining venues. In other good news—The Carlyle‘s iconic Bemelmans Bar just reopened with a new cocktail menu (plus, the guest rooms were updated in a fresh 2019 renovation by the award-winning designer tonychi, which many travelers have yet to experience).

Midtown West and NoMad will also welcome several new properties worth exploring, beginning with the hip Arlo Midtown (whose rooftop is sure to become a prime after-work drinks spot), opening May 27, and followed by the California-cool Pendry Manhattan West (opening later this summer) and Ritz-Carlton New York, NoMad (opening late 2021). 2022 and 2023 will also see the launch of two highly-anticipated projects: the Six Senses New York, located near the High Line in the Bjarke Ingels-designed XI towers (the wellness brand’s first property in the United States), and the grand reveal of the Waldorf Astoria hotel and tower residences, after an exhaustive renovation that began in 2017.

The main dining room at Peak, located on the 101st floor of the tallest building in Hudson Yards. Photo by Charissa Fay

New York’s restaurants and bars are the lifeline of the city, and with the permanent addition of outdoor dining spaces, the scene is poised to come back stronger than ever. In addition to the easing of capacity restrictions, several major policy changes take effect this month: starting May 3, bar seating will once again be allowed, and food is no longer required to be purchased in conjunction with alcoholic beverages; starting May 17, the curfew will be lifted on outdoor dining; and starting May 31, the curfew will be lifted on indoor dining. As you celebrate these freedoms—and reconnect with friends—be sure to book a table at some of the enticing newcomers, along with your old favorites.

Perhaps the biggest opening the city will see this summer is Daniel Boulud’s Le Pavilion, a 140-seat, white table-clothed establishment in the sparkling new One Vanderbilt building, across from Grand Central Station. Heralded by many as the “knight in shining armor” that will lead Midtown’s revival, the restaurant will focus on seasonal, locally sourced ingredients, as well as seafood—and reservations are already being snapped up. (Also launching in One Vanderbilt is the ambitious Summit One Vanderbilt, which is set to open on October 21 and will include immersive observatory experiences like suspended glass viewing boxes and elevators, Kenzo Digital art installations, dining concepts from Danny Meyer, a panoramic outdoor bar and the highest “urban outdoor alpine meadow” in the world.) Other must-visits include Francie, a contemporary French brasserie in Williamsburg that was awarded a Michelin star earlier this month; Peak, a panoramic new American stunner designed by David Rockwell, located on the 101st floor of the highest tower in the Hudson Yards complex; the soon-to-open One White Street, a farm-to-table creation within a historic Tribeca townhouse, fueled by its own farm in Hudson Valley and headed by Danny Morales, Austin Johnson and Dustin Wilson (together, their resumes include Stone Barns, Frenchie and Eleven Madison Park); and two Indian additions: Dhamaka—the bold new sister restaurant to the widely acclaimed Adda, which is focused on celebrating the culinary traditions of lesser-known regions in India—and Sona, an elegant, glowing enclave in Flatiron that was developed in collaboration with Priyanka Chopra Jonas. For casual drinks and light bites, we’re heading to The Ready Rooftop in the new Moxy East Village, The Pineapple Club, Double Chicken Please and Fandi Mata in Brooklyn.

Plus, a few revivals on our radar include: the reopening of Eleven Madison Park with an exclusively vegan menu; the resurrection of Gabriel Stulman’s NoHo hidden gem The Jones as Jolene, an American bistro inspired by Café de Flore in Paris; and Les Trois Chevaux, the first project from Chef Angie Mar since her beloved The Beatrice Inn closed this winter.

Related: The Indagare Guide to Travel During Covid

There’s no shortage of new exhibitions and installations on in the city this summer, to pair with your dining reservations. Now open through October 31, Kusama: Cosmic Nature brings the nature-inspired sculptures of contemporary Japanese artist Yayoi Kusama to the greenhouses, pools, flowerbeds and garden paths of the Botanical Garden in the Bronx. The other top ticket to secure is a pass to Van Gogh: The Immersive Experience (June 10 – September 6), which re-envisions the Dutch master’s work through a large-scale, dynamic digital projection, complete with virtual reality access (created by the team behind Paris’ Atelier des Lumières). For more sensory stimulation, Chelsea’s Artechouse is running its new Geometric Properties audiovisual show (through September 6) created by artist Julius Horsthius to, “embark upon a cinematic journey where the sheer beauty of mathematics, nature and architecture coincide to inspire introspection and awe.” Questions of form in nature and the human mind can be further explored at the Museum of Natural History, where the entirely redesigned Allison and Roberto Mignone Halls of Gems and Minerals will debut in June, with over 5,000 scintillating subjects—alongside a new exhibit, The Nature of Color, which examines how color occurs in nature, as well as its significance in cultures and its impact on our moods and states of mind (on through August 8).

Those interested in contemporary art should not miss the expansive survey of the work of KAWS (Brian Donnelly, known for his graffiti and massive, cartoonish “COMPANION” figures) on through August 5 at the Brooklyn Museum—where a tour of the Obama presidential portraits, by Kehinde Wiley and Amy Sherald, will be on display from August 27 to October 24; back in Manhattan, a mid-career study of Ethiopian painter Julie Mehretu is being presented at the Whitney through August 8. Those who prefer classical work will be absorbed anew by the relocation of the Frick Collection, which has been moved temporarily from its Gilded Age mansion on Fifth Avenue to the Brutalist building that once housed the Whitney and the Met Breuer (it will be on view here through 2022 while the original mansion is renovated).

Broadway will remain on pause until September (though we’re looking forward to Six, a pop musical about the ill-fated wives of King Henry VIII, as well as MJ, telling the story of the life and music of Michael Jackson, and celebrity-led revivals of Company and The Music Man). Radio City Music Hall has just announced that it will reopen on June 19, as part of the Tribeca Film Festival, at 100 percent capacity, accepting fully vaccinated guests only.

For some family-friendly fun, mark your calendars for the June 3 Flatiron opening of Harry Potter New York—the world’s largest Harry Potter store, with an immersive design that will include real props from the movies and plenty of interactive experiences—as well as The Green, a new, open-air public art space at Lincoln Center (open now), and Little Island, a floating park off of Pier 55 that will offer gardens, performances venues and other cultural events to explore (opening May 21). Visitors should note when planning that, due to social distancing guidelines, nearly all events and exhibitions require advance reservation in limited time-slots.