Lay of the Land: Dramatically different from New Zealand’s South, the North Island stretches from windy Wellington, the capital, on the southwestern tip to the beautiful Bay of Islands in the northeast. The country’s largest city – Auckland – sits about midway on the eastern coast and is a massive sprawl and one of the world’s largest cities (as well as a sailor’s paradise). For many, Auckland is a fly-through destination; those who spend a few days should read our Auckland Destination Guide. About 3.4 million people live on North Island (compared with South Island’s 1 million) but between towns and cities, there are long stretches of uninterrupted rolling hills, forests and farmland.

Bay of Islands: A 45-minute flight from Auckland, the Bay of Islands is where many travelers begin their New Zealand itinerary (incidentally it’s also the place where Captain Cook first touched on New Zealand soil in 1769). There are more than 140 islands scattered in the deep blue waters, and the region is one of the most popular for sailing and deep-sea fishing. There are also some pretty coves with sandy beaches, making this a great place for getting over jetlag and easing into a active New Zealand itinerary.

Rotorua / Taupo: The activities-heavy towns of Taupo and Rotorua are twin cities of sorts, but very different in vibe. Rotorua has long been better at marketing itself, with lots of tourist-heavy sites and activities. It’s also one of New Zealand’s centers of Maori culture, and visitors should not miss sites like the Buried Village. Taupo the more chilled-out sibling. Located on a massive lake (the size of Singapore), it’s home to some of the world’s best fly fishing and lesser-visited geothermal sites like Orakei Korako. Picking one over the other depends entirely what type of lodge is right for you and what activities are of interest.

Hawke’s Bay: This region on the east coast of the North Island is famous for big Bordeaux-style red wines as well as Chardonnay (it is the country’s second-largest wine growing region). The central town of Napier has some beautiful Art Deco architecture, as well as farmers markets and some interesting restaurants. The region – bucolic and scenic – runs toward the coast and Cape Kidnappers, a sandstone headland that’s also home to a large gannet population. There’s also a glorious golf and nature resort: The Farm at Cape Kidnappers. 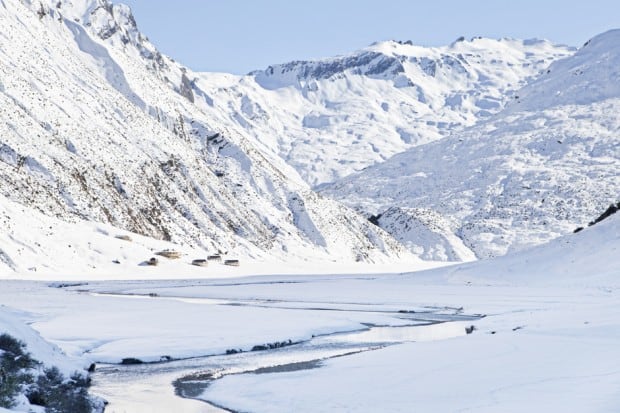 Lay of the Land: New Zealand’s South Island is the larger but less populated of the country’s two main islands. It is ridiculously scenic – in fact, when you picture New Zealand, chances are you are envision the South Island with its rugged alpine peaks, vast plains and glorious coastline. It’s framed by the Tasman Sea to the west and the Pacific Ocean to the east, and the snow-capped Southern Alps run through it all, rising to more than 12,000 feet at Mount Cook (locally known as Aoraki).

The main towns of the South Island are Christchurch, Nelson and Queenstown, but most travelers come here for the countryside: there are ten national parks, eight of New Zealand’s largest lakes and most of the country’s most spectacular glaciers. In sum, if you love the great outdoors, you will be in heaven on South Island.

Christchurch / Canterbury: The long expanses of farmland in the Canterbury area evoke visions of the best of Tuscany and Provence, with large poplar trees lining the roads and expansive rolling fields. Driving from Christchurch to the Banks Peninsula, for example, is one of the country’s best road trips. The Annandale is located near the small seaside town of Akaroa, which can be overrun when cruise ships are docked nearby but otherwise is a sleepy enclave in a stunning setting.

Kaikoura: The drive from Christchurch to Kaikoura takes about four hours, but the last two are so spectacular that time flies by. Crossing from the rolling hills and farmland of Canterbury to the coastal region of Kaikoura is magnificent – the road snakes through the mountains before spilling down the Pacific Coast. (The drive should be broken up with a long lunch at beautiful Pegasus Winery.)

Marlborough Wine Region & Sounds: On a beautiful road snaking along the coast, the drive from Kaikoura to the heart of New Zealand’s Marlborough wine region takes about 1.5-2 hours. The central town of Blenheim is not impressive, so head straight to some wineries to sample predominantly Sauvignon Blancs, Pinot Noir and Chardonnay. Another thirty minutes further north, the seaside town of Picton serves as the gateway to the Marlborough Sounds, home of the Bay of Many Coves resort.

Nelson & Tasman: The South Island’s northern coast runs from the spectacular Abel Tasman National Park—which should figure on everyone’s itinerary east towards Picton—with the seaside town of Nelson located in the middle. A good spot for a break is the Boat Shed Café with beautiful views. The Tasman region is where you want to be based to explore this part of the northern coast. There are several national parks, including Abel Tasman, and many outdoorsy activities can be organized.