Indagare Insider: Travel Editor Pamela Fiori on Her New Book “Holiday: The Best Travel Magazine That Ever Was”

In Holiday: The Best Travel Magazine That Ever Was (rizzoliusa.com), journalist and former editor-in-chief of Travel+Leisure and Town & Country Pamela Fiori chronicles the history of the magazine from 1946 to 1977, when the iconic periodical captured the glamour of the jet age and published such luminary writers as Hemingway, Kerouac, Didion and Capote. Here, Indagare speaks with the globetrotting writer about her new book, her favorite destinations and her travel rituals.

What inspired you to write a book about Holiday?

Actually, the idea came from Charles Miers, the head of Rizzoli, which published the book. When we first met a few years ago, he asked about my career in magazines. When I told him I got my start as a fact-checker at Holiday in 1968s, his eyes lit up. “Holiday? Really? I’ve always wanted to do a book about the history of Holiday. Would you be interested?” The more I thought about it, the more I realized that there might be a fascinating tale to tell, not only about the magazine itself but how it evolved through the decades. It was, after all, America’s first travel publication, launched in 1946, after World War II, when the country was full of optimism and opportunity. From prop planes, transatlantic crossings, travel by train and the family car in the latter half of the 1940s through the 1950s to the dawn of the jet age and into the early 1970s and the advent of the 747 and mass tourism, Holiday had a perfect perch for witnessing social and cultural changes related to travel and transportation.

What do you remember most about working at the magazine at the start of your career, in 1968?

It felt like the most glamorous place in the world to me in, ironically, one of the worst years in American history. Here was a staff of experienced, intelligent and witty people, mostly men, who were completely at ease in the company of renowned writers, famous photographers and gifted artists in the heart of New York City. Pretty heady stuff for a young woman in her mid-20s. 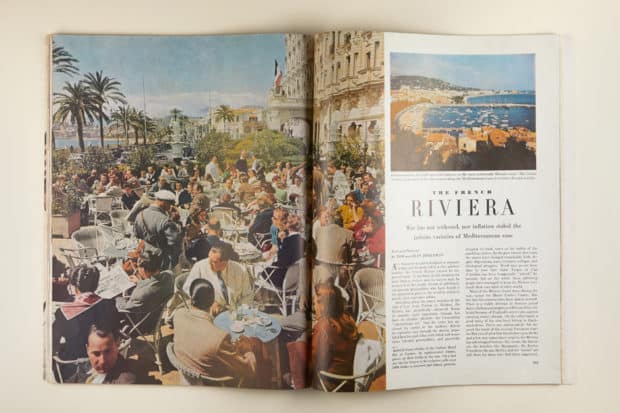 Cannes, France. Artwork by Tom and Jean Hollyman, Holiday, July 1948. From Holiday: The Best Travel Magazine That Ever Was by Pamela Fiori, Rizzoli New York, 2019.

Holiday published pieces by many legendary writers, including Hemingway, Kerouac and Capote. Do you have a favorite piece that appeared in the magazine?

I have many favorites, but the most memorable is probably “Here Is New York” by E.B. White. In the late 1940s, Holiday’s editor-in-chief Ted Patrick persuaded White, then living in Maine and associated with The New Yorker, to come to Manhattan and write about the city in the sweltering, insufferable heat of summer. It later became a book and is still in print to this day. As for the contributing photographers and artists, the cast was star-studded: Slim Aarons, Robert Capa, Henri Cartier-Bresson, Ludwig Bemelmans, all of them under the gentle supervision of art director Frank Zachary.

Was there anything that you were surprised to learn while researching your book?

First of all, there were no archives, none. So I had to go to sources that specialized in vintage magazines. consequently, I became one of eBay’s most frequent customers, amassing as many back issues as I could between 1946 and 1970. Secondly, I was—and still am—astonished by the high quality of the writing, images and design. Everything I learned about high standards in print came from my early days at Holiday.

You have traveled extensively throughout your career in publishing. What are some of your favorite places you’ve visited, and why?

While I love cities—Paris, London, Venice and Rome being closest to my heart—I have a weakness for exotic places like Morocco (especially Fez and Marrakech), Egypt, the north of India, East Africa and South Africa. The experience of being in such locations is thrilling, eye-opening and life-altering. 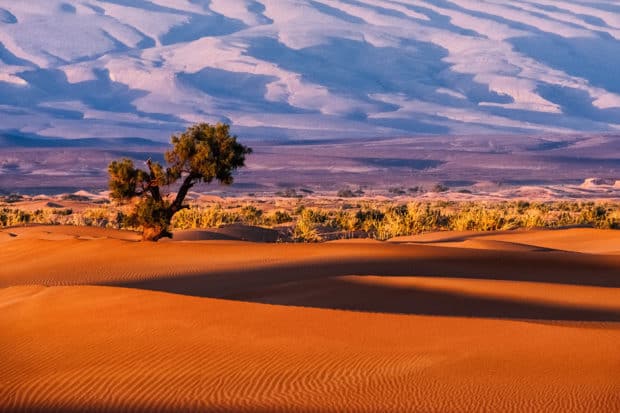 The Sahara desert in Morocco. Photo by Sergey Pesterev

Do you have a favorite place to return to time and again?

Given my roots, I would have to say Italy. It was the first foreign destination I visited and lived in as a young woman; it was where I learned to be independent and resourceful; and, to this day, it remains a country and a culture that still enthralls me and speaks to me in the most profound ways.

What destination is currently at the top of your bucket list?

Probably Rwanda. Ever since I took my first trip to Africa in the early 1980s, I fell in love with the various landscapes, the native culture and, of course, the wildlife. Getting up close and personal with a gorilla is my idea of heaven. I’d also like to spend some time in China with a few pandas.

Spreading your wings in a way that is respectful of your surroundings and not intrusive is key. So is knowing yourself. It is one thing to want to reach great heights, to be adventurous. It is another to take unreasonable risks and put yourself or others in harm’s way. For many years, I was a board member of the U.S. Fund for UNICEF and traveled to difficult, sometimes perilous places (Haiti after the earthquake, Sri Lanka after the tsunami) to witness the damages firsthand and understand how these countries were coping with disaster, tending to their people (especially the children, through education, immunizations and hygiene) and maintaining their dignity under the direst of circumstances. You will never be the same after experiences such as these. Similarly, there are the pressing issues of conservation and climate change, which are impossible for a thinking person to ignore. 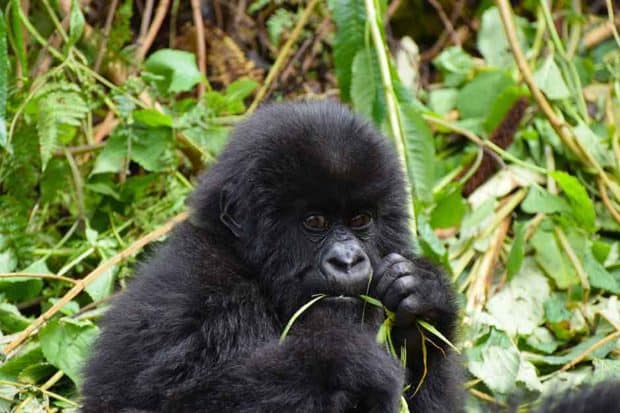 A baby gorilla in Rwanda. Photo by Porco Rosso

What’s always in your carry-on?
My iPhone and iPad, a good book, important medications, some makeup, a notebook and writing implements. Even in the high-tech age, I still prefer to jot down my thoughts in longhand. Call me old-fashioned.

Are you an over-packer or a minimalist?
I try never to check a bag, even when I am traveling to a faraway place, so I depend on lightweight, foldable basics—pants, knits, shawls, scarves and stoles—that I carry in a bag on rollers that’s easily stored in the overhead.  I learned the hard way, as my luggage went astray several times. Once in Egypt in the early 1970s, I had to wear caftans because my bags never showed. It was a lot more cumbersome than it sounds.

What’s your favorite long weekend getaway?
Now that I don’t have a full-time job on a magazine, I can travel between Monday and Friday. That is indeed a luxury.

What’s your favorite souvenir you’ve brought back from a trip?
An oil painting of two racing pigeons looking longingly at each other with the English countryside in the background. My husband and I, newly married, found it at a gallery in London after first seeing a similar style of paintings in a restaurant in Covent Garden. We searched for days and came up with nothing. Finally, on the morning we were scheduled to leave, we called the restaurant (duh!) and were told the name of the gallery that specialized in 19th-century primitive animal painting. We rushed there, found our painting and were even driven to the airport by the gallery’s owner to ensure that we made our flight. That was almost 40 years ago.

“I have a weakness for exotic places like Morocco, Egypt, the north of India, East Africa and South Africa. The experience of being in such locations is thrilling, eye-opening and life-altering.”