Less than a month before the start of the FIFA World Cup—the biggest international competition for soccer (November 20 to December 18)—I traveled with one of our Insider Journeys to explore Qatar, the first Arab or Muslim nation to host the games. We were able to see some of the cultural wonders that have been built over the past 10 years as well as some just-unveiled ones. Here are a few of my essential tips on Qatar and how to explore Doha and its surrounding desert for first-time visitors.

How to say Qatar

You have probably heard Qatar pronounced as Cutter and Cat-R (with the emphasis on cut and cat). It isn’t easy for foreigners to get the Arabic pronunciation, so both of those versions are frequently heard, but my local friends explained that it is more of a soft a, as in guitar, but with a Q. 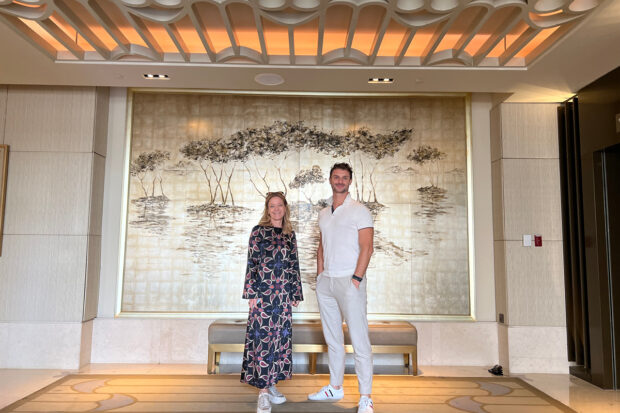 Remember this is a Muslim country. As Pierre Daniel, the French athlete who ran 295 miles around Qatar in seven days, said on my SiriusXM radio show and podcast Passport to Everywhere, allowances will be made for the influx of foreigners, but out of respect for residents, you should be aware that Western attitudes toward dressing and drinking are not the norm here. Alcohol is forbidden under Islam, and while hotels and other venues allow foreigners to drink, locals, for the most part, do not. Similarly, dress is much more modest than in the West. So even if you can bare a lot of flesh, it is respectful not to wear tight-fitting clothes in public. The best way to get to know a culture is to interact with locals, and they will be more at ease with you if you are not offending their social norms. 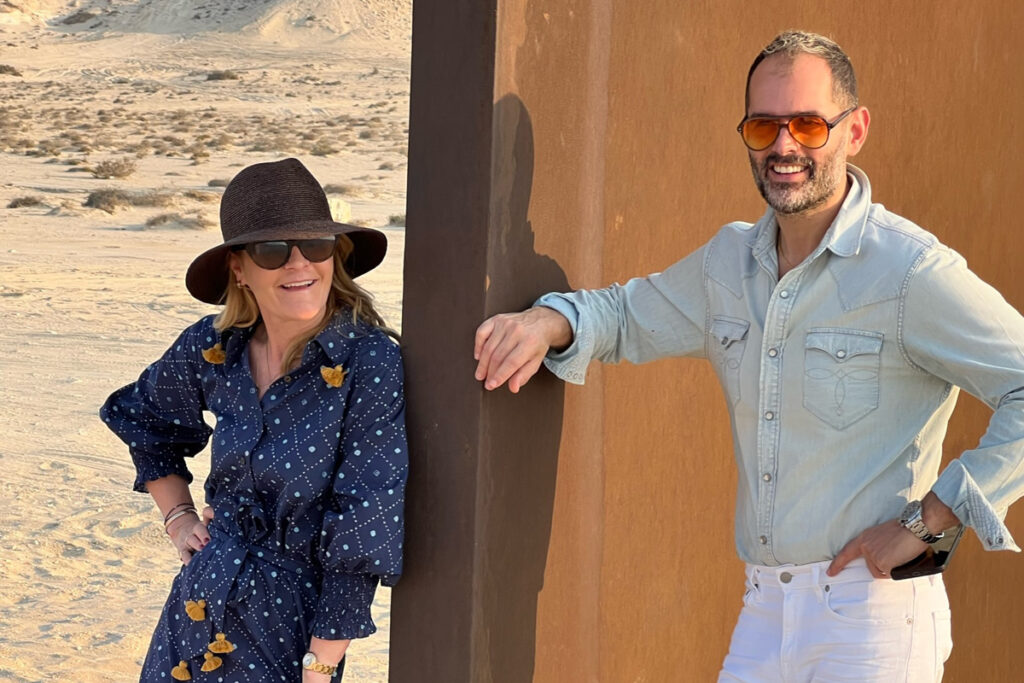 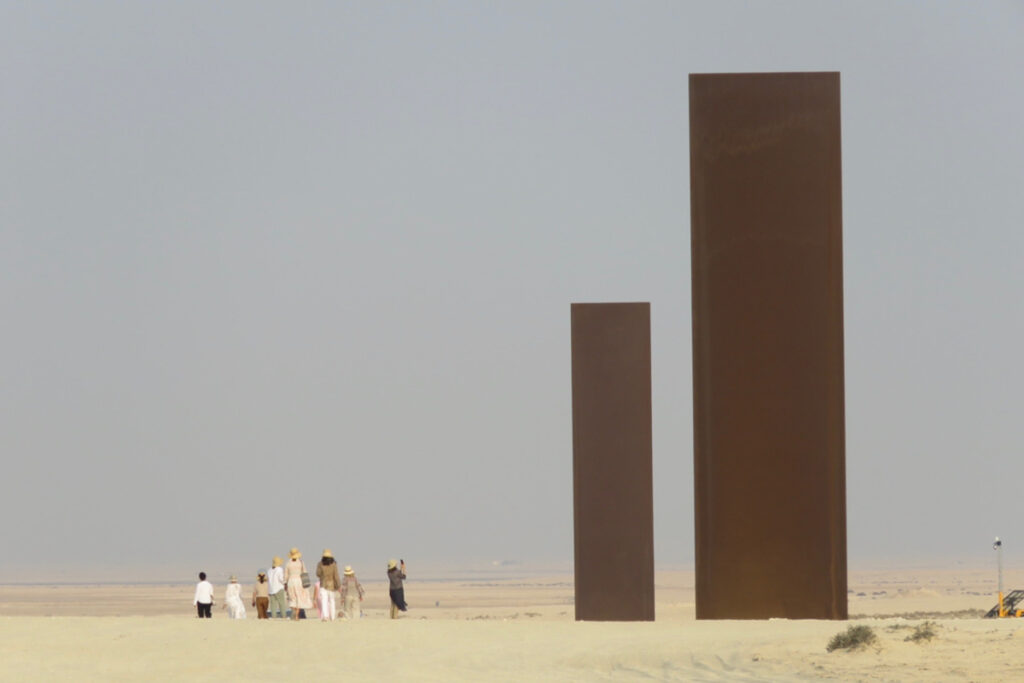 The capital city of Doha is extremely clean and safe, with new highways and a metro system, and it is where most of the FIFA World Cup games will be played, but if you can get out of the city—either on a boat to see the skyline from the water or into the desert to visit a beach or the dunes—do so. 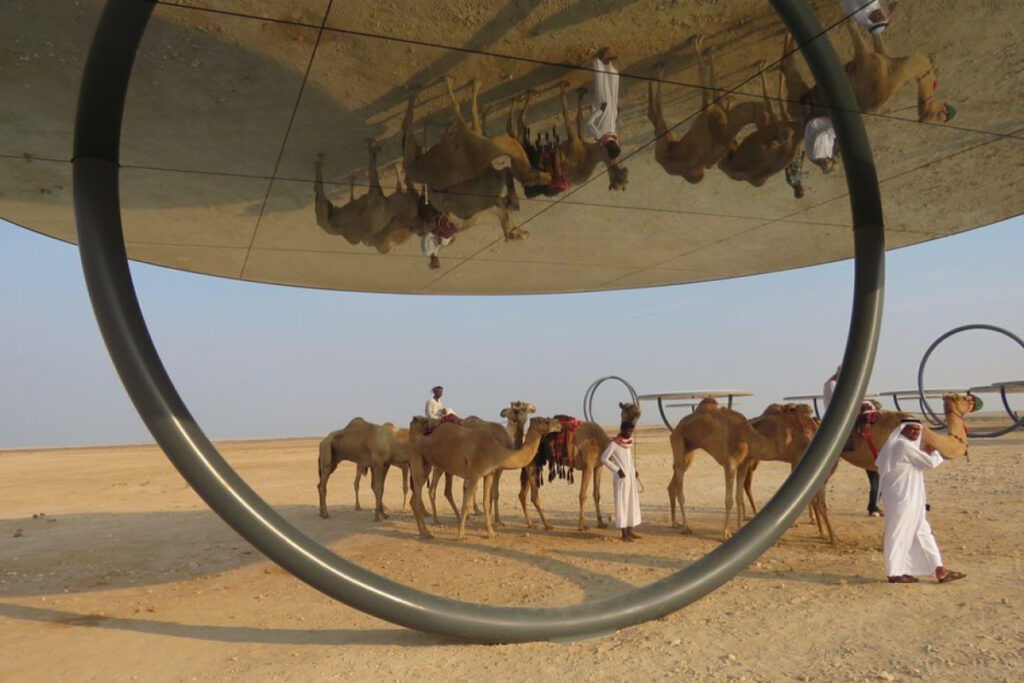 Olafur Elliason's Shadows Traveling on the Sea of the Day. Photo by Marina Purcell 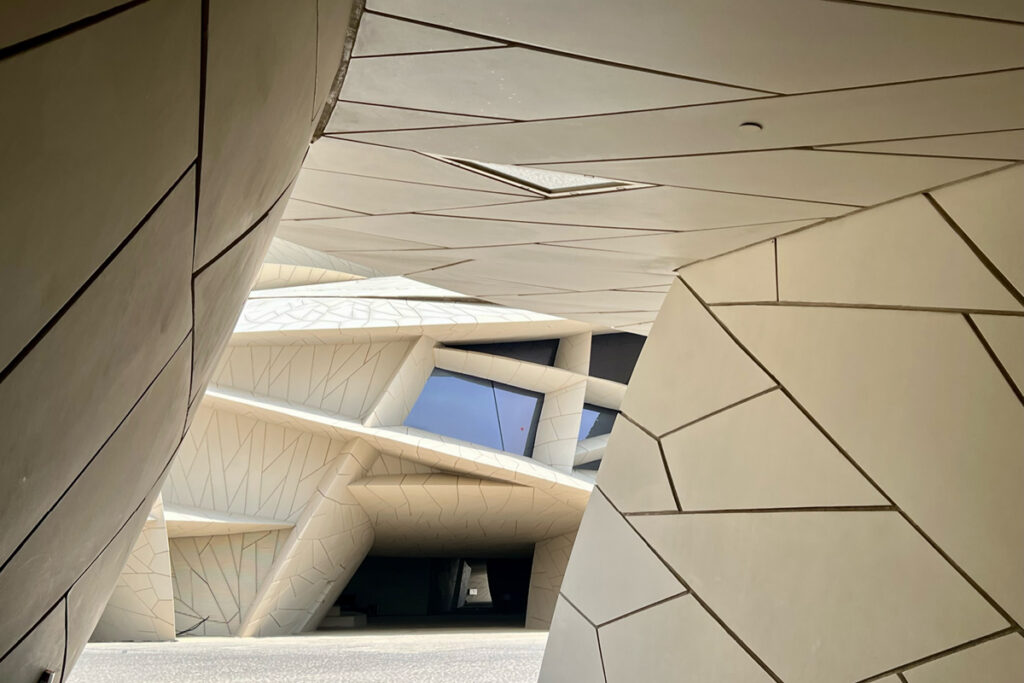 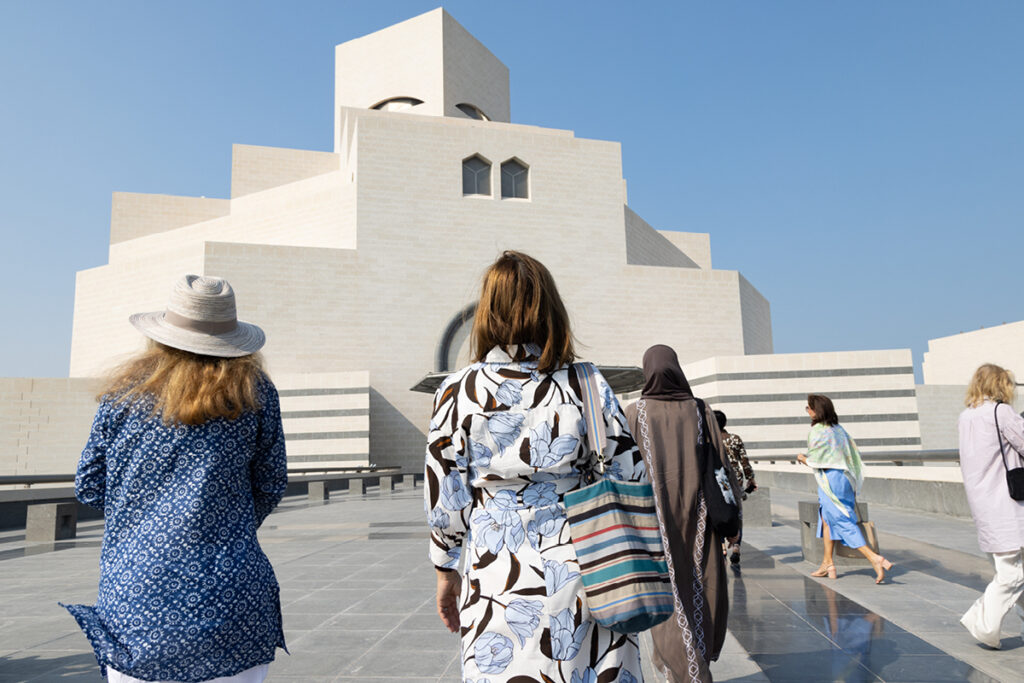 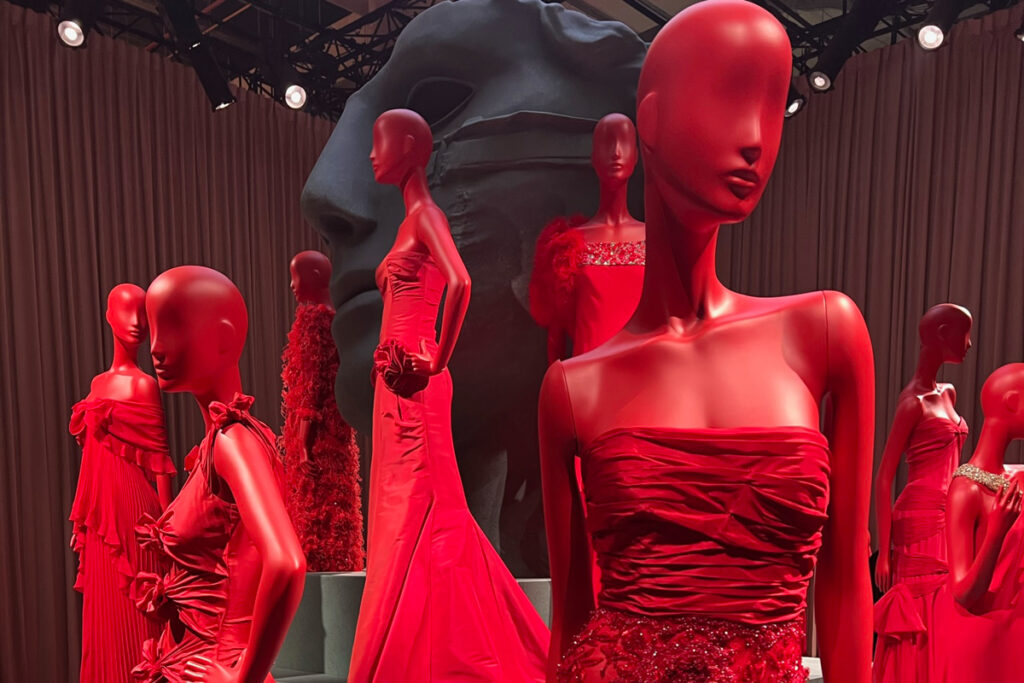 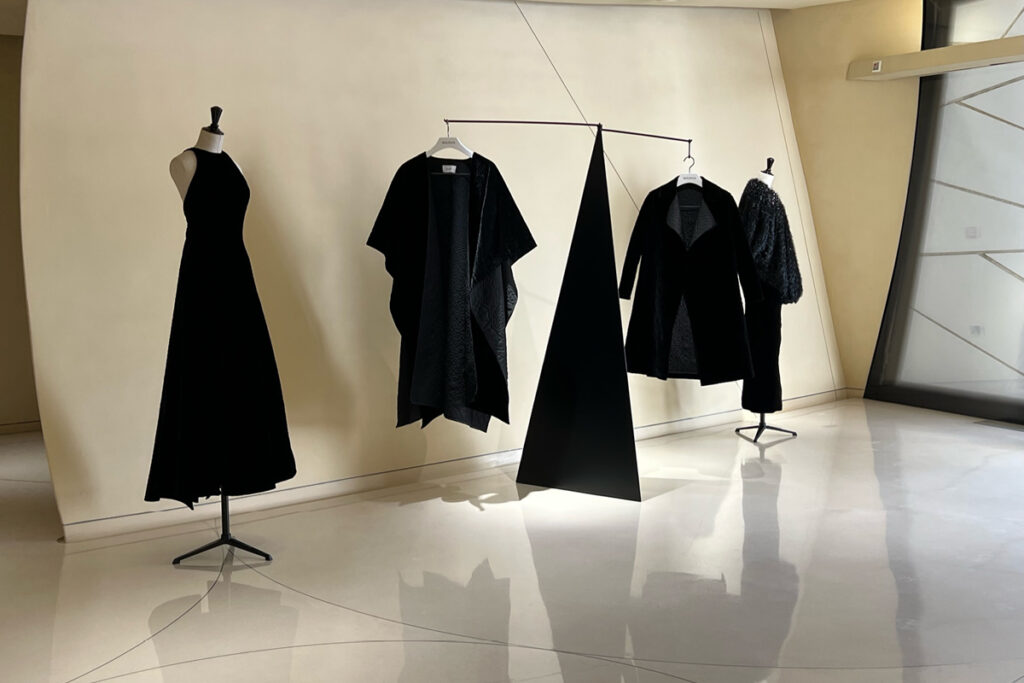 There are some incredible art installations in the desert like Richard Serra’s East-West/West-East in the Brouq nature reserve and one just unveiled in time for the games by Olafur Elliason called Shadows Traveling on the Sea of the Day, in the desert north of Doha.

But even within Doha you will see lots of amazing public art, including a giant inflatable sea creature by Jeff Koons on the corniche and dozens of palm trees wrapped in red-and-white polka dots by Japanese artist Yayoi Kusama. The Emir’s sister Sheika Al Mayassa is one of the world’s most important art collectors, as well as the chairperson of Qatar Museums, which has opened five major museums since 2008. She is a huge advocate for taking art to the people in public spaces and in creating cultural dialogue in museums. Don’t miss the Museum of Islamic Art (MIA), which was the last building designed by I.M. Pei; it is spectacular, as are the collections within, ranging from jewels from the Moghul empire to textiles, ceramics and even an entire 18th-century room from Syria.

The National Museum of Qatar is also a must-see. Designed by French architect Jean Nouvel after the crystalline form of a desert rose, it is an exquisite building inside and out. Truly one of the most beautiful spaces I have ever seen, and a visit will teach you an enormous amount about the natural environment, history and culture of the region. Plus, there is a great museum gift shop, and tucked in a wing of the museum before the entrance is my favorite shopping discovery in Doha: a store called Wadha, where Qatari designer Wadha Al Hajri, who cut her couture teeth, so to speak, with Valentino, displays gorgeous fashion and accessories and perfumes in a stunning space that she designed. Her pieces are modern and elegant. Think 21st-century Cristobal Balenciaga, who is her design idol. And don’t miss stepping into the “reflective” room that she created for perfume contemplation. Scents are extremely important in Arab culture, and she worked with the world’s best nose to create gorgeous exclusive perfumes. (The very discerning ladies I was traveling with bought a lot of them.) And for fashion lovers, you must visit M7, the creative incubator, where there is currently the largest- ever retrospective of the designer Valentino called Forever Valentino, featuring more than 200 haute couture and prêt-à-porter pieces. It will run through April 1.

The Emir’s mother Sheihka Moza spearheaded another important development in the country, Education City, a four-and-a-half square mile area devoted to higher education and research, with outposts of universities from the U.S., Paris and Carnegie Mellon, including Georgetown, Cornell, Northwestern and Carnegie Mellon. At the heart of the area is another architectural masterpiece, the Qatar National Library by Rem Koolhaus, which is another must-visit in my book. 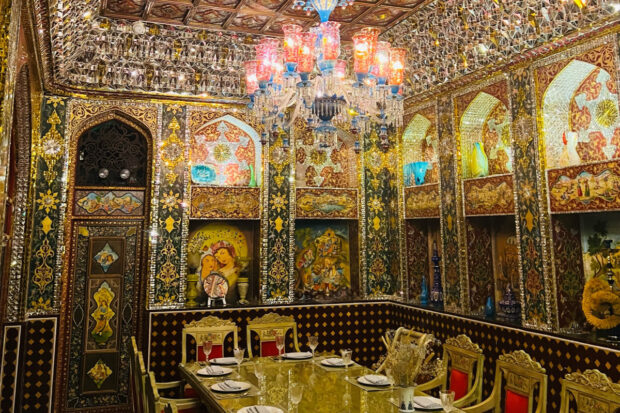 For some amazing meals or drinks with views, two hot spots are Nobu and the just-opened The Ned, which is in the former Ministry of Interior building on the corniche, but another special experience is a delicious Persian meal in the Souq Waqif at a restaurant called Parisa.

And while you might want to take photos of Parisa’s interiors or Nobu or The Ned’s views or the incredible buildings, an important cultural note to keep in mind is that people are much more private about their images in the region, so do not take photos of people without their permission, and know that most women will prefer not to be photographed and certainly don’t want their faces posted on social media.

Finally, when it’s time to leave, you get to fly through one of the world’s nicest airports. There’s even great public art there: Look for Swiss artist Urs Fischer’s 23-foot-high bright yellow bronze sculpture Lamp Bear, which is an ode to the nostalgia of home, and Cosmos by French artist Jean-Michel Othoniel that represents the journeys of travelers and was inspired by the oldest astrolabe in the Museum of Islamic Art. These again are examples of the work of Sheikha al Mayassa, who attended Duke University, and her love for contemporary art and her desire to share it with others. The airport also has an outpost of one of my favorite restaurants from Beirut, Le Comptoir, which serves delicious Middle Eastern food, including Manoush, a delicious cheese and zaatar flatbread, and if you didn’t have time to buy anything at the Gold Souk in Doha, there are vendors selling charms and chains in 18k gold sold by the weight. And if you want to bring a special souvenir or gift home, the most incredible date confections I’ve ever tasted come from a shop called Qinwan, which has an outpost at the airport, too.

Because of the World Cup, travelers to Qatar will need to apply for an additional visa, known as the Hayya Card, to enter Qatar for any trips taken before January 23, 2023. The card acts as both an entry visa into the country and a Fan ID for World Cup matches. It also provides free public transport access on match days. The Hayya Card is required regardless of travelers’ intention to attend a Cup game.

Contact Indagare or your Trip Designer to learn more about planning a trip to Qatar.

“Jean Nouvel's National Museum of Qatar is truly one of the most beautiful spaces I have ever seen, and a visit will teach you an enormous amount about the natural environment, history and culture of the region.”