In the shipping port-cum-trendy downtown hub of Cape Town’s V&A Waterfront, among sidewalk cafés and boats gleaming in sun-drenched waters, the Silo Hotel rises above the harbor.

Its exterior is a spectacle: a series of giant, pillowed glass windows, with geometric panes tinted blue in the reflecting sun. The structure demands attention–and certainly receives it–as the opening of the Silo Hotel has quickly become the hottest news in Cape Town this year. A project nearly 10 years in the making, the boutique hotel is part of an exciting urban development involving the restoration of the city’s historic grain silo, which also houses the much-anticipated Zeitz-MOCAA art museum. The Silo marks an important moment for South Africa’s seaside city, breathing life into Cape Town’s waterfront and ushering a new era of luxury tourism to the colorful capital.

At the helm of the project is Liz Biden, the visionary hotelier behind several much-lauded South African retreats, who searched for more than a decade for the perfect location. Finally she landed on the city’s grain silo which, however iconic, presented a challenge, as the 1920’s-era factory complex contained 42 vertical cylinders (silos) that could not be removed. Enter Thomas Heatherwick, the famed architect who found an innovative solution to the design conundrum. The vision: transform the cylindrical structures into high-ceilinged, palatial guest rooms, embracing the building’s industrial skeleton and balancing it with Liz Biden’s plush, baroque-style interior design. And while the construction was no easy feat—each of the 82 windows was hand-cut so as not to interfere with the building’s structural integrity—the property was unveiled in March 2017 as a modern masterpiece.

Related: All Eyes on Cape Town 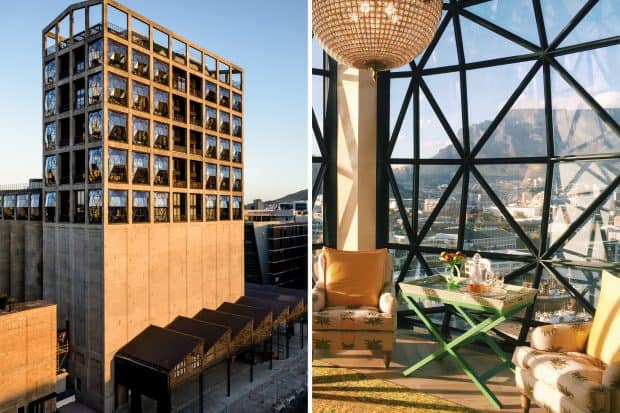 Guests enter the Silo on the ground floor, where their first eyeful of the hotel includes a glorious collection of modern art. There, juxtaposed with the building’s original grain hoppers, a giant industrial chandelier hangs above a kooky neon sculpture; an evocative war photograph; and a painting of a femme fatale that, upon further inspection, is constructed entirely of sequins. And this is just the beginning. In fact, the Silo boasts one of the world’s greatest collections of contemporary South African art, which is evidenced by hundreds of colorful, eclectic pieces gracing the rooms and common spaces. The art collection, which includes many works specially commissioned for the Silo, was another key element of Liz Biden’s vision for the property. (This is only appropriate, as the hotel sits directly above the Zeitz-MOCAA contemporary art museum, already regarded as the Tate Modern of Africa).

The wow factor continues as guests are whisked upstairs to the 6th-floor lobby. Framed by the unmistakable pillowed-glass windows, the space is decorated with plush velvet sofas, vintage barstools and industrial light fixtures: an opulent glass jewel box in the sky. There, the Willaston Bar (aptly named after the SS Willaston, the first ship to transport grain from the building in 1924) and fine dining restaurant can be found. And on the 11th floor, the Silo’s rooftop bar is already attracting Cape Town’s most fashionable crowd thanks to its sleek pool and hip atmosphere. The pièce de résistance is a raised, grass-covered pavilion–the hotel’s highest point–which offers 360-degree views of the seaside city, which backs up against Table Mountain. 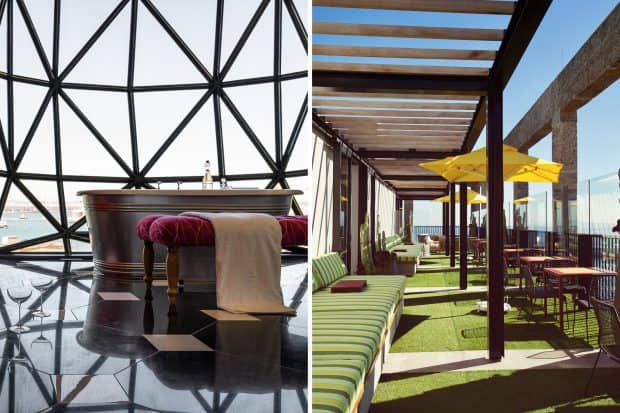 Despite its commanding presence, the Silo is quite intimate with only 28 guest rooms. The design team made the choice to forgo adding more accommodations in favor of making them larger, affording each with incredible harbor views and 18-foot ceilings (in fact, most rooms offer more vertical space than horizontal due to the Silo’s structure). Accommodations are individually designed and, in typical Liz Biden fashion, a true feast for the eyes. The designer’s eclectic style shines in each room: plush textures complement Art Deco antiques; brightly painted furniture offsets colonial touches; quirky modern art hangs below opulent chandeliers; and sky-high ceilings frame the now iconic, geometric-paned windows. And while Biden’s baroque style reigns, the Silo’s rooms are given an edge with exposed steel beams and the subtle use of industrial materials throughout—a nod to the building’s factory heritage. The result is an innovative contrast of old and new: a testament to Biden’s careful curation and serious eye.

As is expected, the Silo excels at another piece of the hotel puzzle: dining. While the property has its fair share of culinary competition (Cape Town is quickly topping the list of international foodie destinations), the Silo has already established itself as a staple of the city’s gastronomic scene. Head Chef Veronica Canha-Hibbert referred to her traditional French training when designing the dining program, which emphasizes old-fashioned comfort food and updated classics. The Silo’s all-day eatery, Granary Café, offers tried-and-true favorites like excellent Sunday roast and indulgent afternoon tea; while the dinner menu features elevated seasonal fare like seafood bouillabaisse and rabbit tortellini. A rooftop tempura bar serves charcoal-fired delights and creative desserts.

When not exploring Cape Town, guests can take advantage of the Silo’s private art gallery, gym and spa. But beyond its amenities and level of luxury, the Silo delivers an experience that’s supremely unique, and visitors can’t help but be awed by its sheer spectacle. On my last evening in Cape Town, I admired the bright orange African sun descending below the horizon. And there, above the bustling waterfront, the Silo lit up the sky, its windows glowing like a giant lantern: a lighthouse at the bottom of the world.  www.theroyalportfolio.com

Contact Indagare for assistance planning a vacation to the Silo.

Who Should Stay: Couples and groups who appreciate high-design and an ideal location. While the hotel is extremely stylish, it nevertheless offers amenities and room categories that will suit families traveling with kids.

Getting There: Most major airlines have direct flights to Johannesburg (15 hours from NYC) and connect on short, 1-hour domestic flights to Cape Town. South African Airways, an Indagare preferred airline, offers a top-notch business class experience, and their business class lounge in Johannesburg is a lovely place to lay over.

“The Silo marks an important moment for South Africa’s seaside city, breathing life into Cape Town’s waterfront and ushering a new era of luxury tourism to the colorful capital.”