Indagare’s Bridget McElroy is just back from Singita Pamushana, where she and several Indagare staffers received a deep-dive education on Singita’s non-profit conservation partner in Zimbabwe, the Malilangwe Trust, and its wildly successful efforts to save rhinoceros populations.

Contact Indagare or your Trip Designer to start planning your next African safari. And for more information on how your travels can help change the world, learn more about the Indagare Impact program.

Singita Pamushana sits atop a sandstone ridge directly overlooking the hippo- and croc-infested Malilangwe Dam and further out over the 130,000-acre Malilangwe Wildlife Reserve. It is absolutely picturesque, easily one of the most stunning views I’ve had the privilege of setting my eyes on. Yet it is not the view that took hold of my heart.

As we made our way back to the lodge under a blanket of stars on the first night of our stay, we couldn’t help but start a rhinoceros tally: the first two by the trees, then the mom with her baby, that huge one by the watering hole and the one that skittered away as soon as we crossed its path… we recounted our rhino sightings until we landed on nine—nine different rhinos in our first evening game drive. The number was almost incomprehensible. Before arriving in Zimbabwe, we had spent a few nights on safari in South Africa, both in the Sabi Sands Game Reserve and in Kruger National Park, and up until this point, we had seen just one rhino. This was my third safari in three years, and at most, I have had one, maybe two rhino sightings per trip.

A Population in Crisis 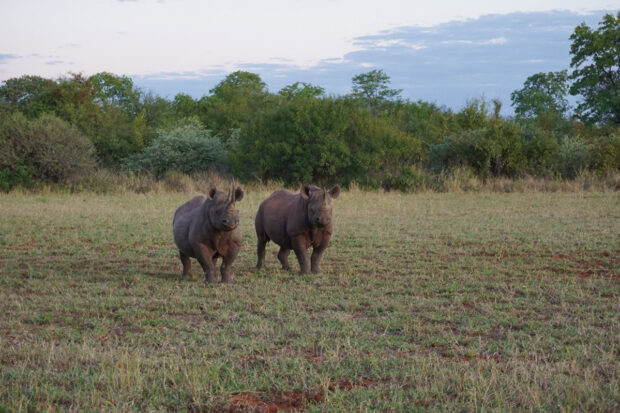 This irregularity has become somewhat standard on safari. And while, in a way, it’s the norm to lump rhinos in with leopards as lucky spots, there is actually nothing normal or natural about the reason rhinos are so scarce. Unlike the leopard, which is elusive and tough to track, the rhinoceros does not exactly blend in. Its populations are dwindling as a direct result of poaching. The creatures, which otherwise do not often fall victim to other forms of predation, are illegally slaughtered for their horns. It’s estimated that in the last decade, close to 10,000 rhinos have been poached across Africa; black rhinos are now listed as critically endangered, and white rhinos are near threatened. 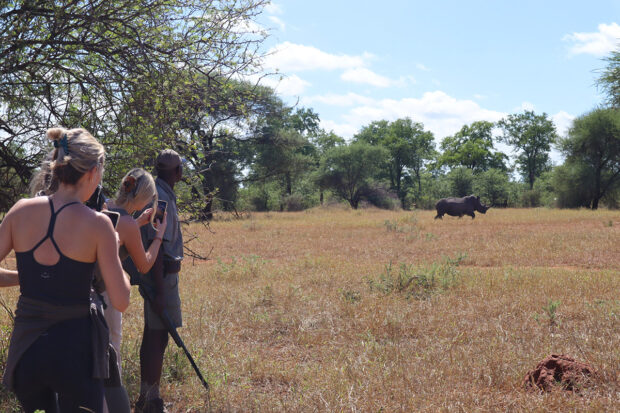 An outlier in all this tragic population decline, Zimbabwe’s Malilangwe Wildlife Reserve has not lost a single rhino in that same 10-year span. And even before that, when southern Africa began to see a sharp increase in rhino poaching in 2007, only two rhinos were lost to poaching on the reserve.

The rhino poaching crisis is incredibly nuanced, and there is no one-size-fits-all solution to guaranteeing a future for rhinos, but the stats—and the safari experience eye test (nine rhinos in one drive!)—suggest that the Malilangwe method works. Of course, nature is on their side, and a small portion of Malilangwe’s conservation success can be credited to the fact that the soils in the area are nutrient-dense and ideal for both white and black rhino to forage. But beyond favorable conditions, there is so much that goes into rhino conservation.

Before the Malilangwe Trust was formed in 1994, only a few white rhinos remained in the area. Between 1996 and 98, 12 white rhinos and 28 black rhinos were brought in from South Africa. And over the past 20-plus years, their populations have ballooned. Since they first arrived, the number of black rhinos has increased by 532 percent—and of white rhinos, an even more staggering 729 percent. These increases are so tangible and so extreme that Malilangwe has, in turn, been able to supply rhino to restock other conservation areas across southern Africa. In 2015, eight of Malilangwe’s rhinos were relocated to Botswana.

To maintain both the steady population growth as well as the general health of the animals and to reach the point at which you are able to give rhinos away requires constant, diligent attention. That is where the Malilangwe Scouts come in. The Malilangwe Trust employs over 300 Zimbabweans, all of whom contribute to the Trust’s hospitality, conservation and community development goals in different ways—including a hand-picked few who work as the scout force.

Low staff turnover is absolutely crucial for the success of anti-poaching operations. In South Africa and other parts of Zimbabwe, most poaching attempts actually come from within. Should scouts or rangers decide for whatever reason—low quality of life, the promise of a lucrative reward or something else—to flip their allegiance, they quickly become the most dangerous threat to conservation, because the people tasked with protecting the wildlife are inherently trusted with the intelligence needed to launch a successful poaching outing. Malilangwe does everything in its power to proactively prevent this. First and most importantly, they strive to get the surrounding area on board with their mission, and they have a number of community projects and initiatives in place that serve to build a reliable association of people who not only appreciate the work done by the Trust but also understand the importance of conservation. 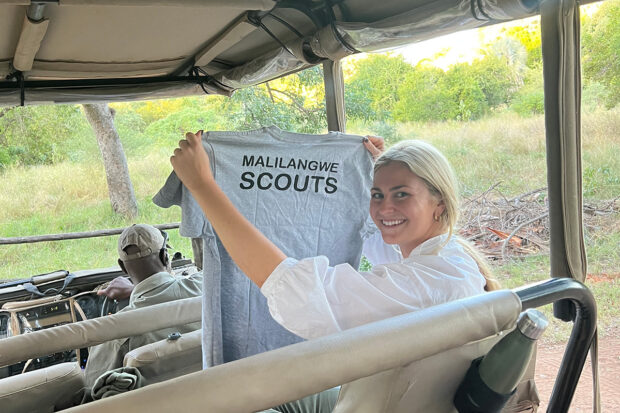 As mentioned, Malilangwe handpicks potential recruits, aged 18 to 25 years from families that live within 16 miles of the Reserve boundary. After being selected, prospects undergo an intensive six-month long course during which the group is filtered down to those who will ultimately become Malilangwe Scouts. The program is focused on physical training, the art of tracking and the use of weapons. The young men also learn First Aid, how to use radios and GPS and details about local flora and fauna. And once confirmed as scouts, they also complete a week-long refresher course every three months to constantly fine tune their skills.

During our visit, Malilangwe’s Head of Security, Mike Ball, toured us around the impressive security headquarters (converted former stables). On the walls, photographs of men training, weightlifting and wrestling throughout the natural landscape—their faces both intense and proud—hammered home to me just how important the scouts are, both for community morale as well as for the protection of the area’s wildlife.

Over 90 percent of the scout force comes from nearby villages, and all scouts are registered as members of the police constabulary so they are able to help keep the peace when they are at home, too. (Malilangwe is also working to secure a permanent post within the local police departments so that within the next year or two, they can staff a team of scouts in the village full-time.)

To be a scout is an incredible honor, but it is also a grueling commitment, and at its heart, a risk. Scouts have multi-faceted roles and their duties include biological monitoring and environmental protection as well as law enforcement and crime response. They track the movements and collect data on the rhinos as well as other species within the reserve at the same time that they patrol for threats. Scouts are expected to work an 11-hour day shift and be on call during the night. And when threats arise, they put their lives on the line. 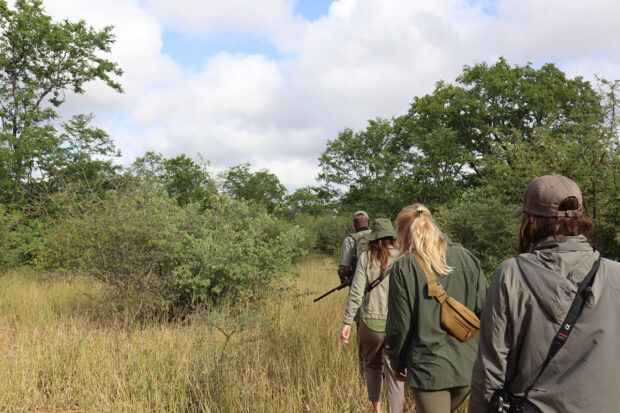 Given the monumental expectations of the force, rather than over-invest in helicopters and fancy technology, the security team invests in its people. Nearly 70 percent of the anti-poaching budget is allocated to salaries alone, and Malilangwe is one of the only places where scouts are permitted to have their wives and children stay on-site, contributing to a higher level of happiness among their ranks. Additionally, once they are no longer able to keep up with their patrol responsibilities, older scouts are offered other, less physically taxing jobs within the Trust.

While the security team would never deny the benefits of technology as a supplemental tool, they believe that strategic recruitment, strong leadership, intelligence and continued education as well as community engagement are more valuable than any piece of equipment. Their approach might not work everywhere, it works for them: The Malilangwe Scout program has proven so successful that right now, they are astonishingly beyond the land’s carrying capacity for rhinos, and the team is once again choosing rhinos to be relocated elsewhere in southern Africa. We were able to sit down to lunch with both Executive Director of the Malilangwe Trust, Mark Saunders, and General Manager of Singita Pamushana, Jason Turner, who explained to our group that this selection process is always an emotional and painstaking one. Realistically right now, no rhino will ever be as safe as it is on the Malilangwe Wildlife Reserve, but relocation is absolutely necessary in order to make real progress in repopulating the world’s rhinos. Studying and determining which individuals are the right ones to send out can make all the difference when it comes to measuring the success of introductions to new areas and minimizing the disruptive impact to the home population. 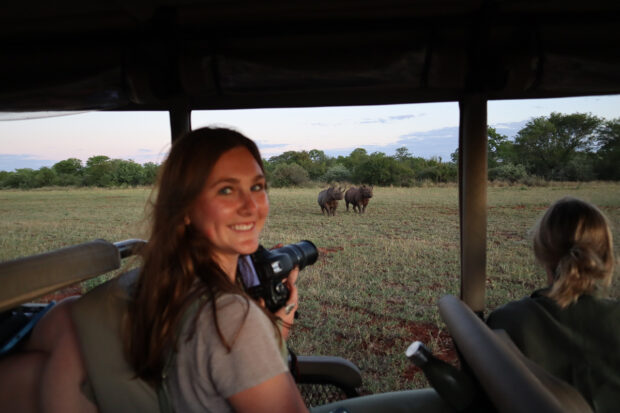 As only serendipity could afford, our stay at Pamushana was bookmarked by rhino sightings. Just as the nine white rhinos welcomed us on our first night, four black rhinos made a farewell appearance on our very last evening game drive. The first black rhino calf was born at Malilangwe in 1998, and since then many more have joined the family. But black rhinos remain even more endangered than their white rhinos, and there are only between 5,000 and 6,000 of them left across the continent. Nevertheless four of these 5,000 showed out for us. Usually found amidst thick brush, these four were standing around the airstrip, completely in the open as if to thank us for our visit and by way of that, our interest in their well-being. They put on quite a show, too, bluff charging our vehicle a few times, making for a truly remarkable encounter.

More than just a pretty place, Singita Pamushana has a soul and a purpose, both of which are palpable. Everybody we met with during our stay was proud to fit into the Pamushana puzzle, and contributed to the magic of the place. From the natural beauty to the next-level hospitality and the resounding conservation success which manifests as a terrific safari experience, my experiences at Pamushana will linger with me for years to come, and I cannot wait to return.

Contact Indagare or your Trip Designer to start planning your next African safari. And for more information on how your travels can help change the world, learn more about the Indagare Impact program. 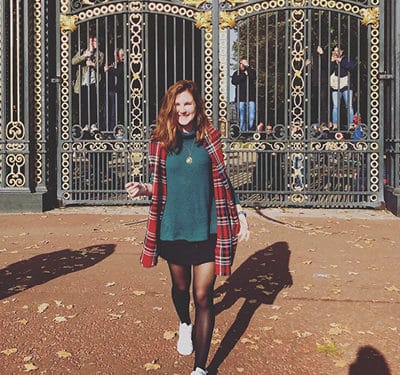 “To be a scout is an incredible honor, but it is also a grueling commitment, and at its heart, a risk.”