I arrived at Paro, Bhutan with an open mind and heart. But from the moment I stepped off the plane, my senses were immediately tested by the magnitude of the Himalayas that surrounded me; the aroma of the impossibly crisp air; the sounds of an unfamiliar language, lovely and gentle.

My trip began with a crash course in the history of Bhutan. Accompanied by my guide, we sped along a bumpy, curved road to our first stop: Thimpu. I quickly learned that Bhutan did not have roads, a postal system or telephones; the country introduced a currency in the 1960s, and televisions in 1999. Mobile phone and social media are only slowly becoming a part of society. 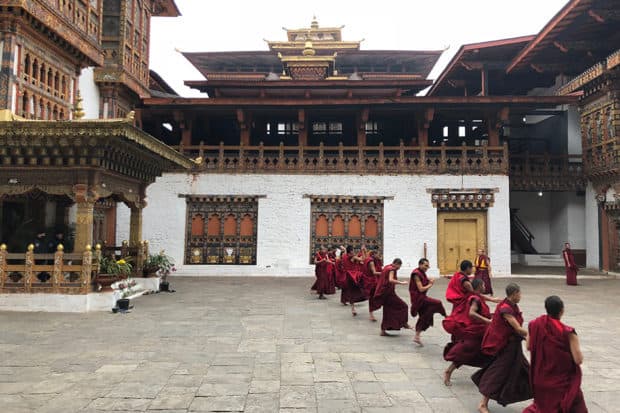 Young monks prepare for a festival in the Punakha Dzong

En route to Thimpu, we pulled over to see what would be the first of many monasteries that populate Bhutan. We walked through, passing the stray dogs, cows and donkeys that roam the small country freely. On my first day, my guides  provided me with a traditional dress to wear, known as a kira, a long, ankle-length dress accompanied by a light outer jacket known as a tego. Men wear a gho, which resembles a Japanese kimono. While it is not required in Bhutan, most women and men, even of the younger generations, can be seen wearing them. After getting dressed, I felt somewhat less like a chilip (a foreign person).

Related: Melissa’s Travels: Why We Travel 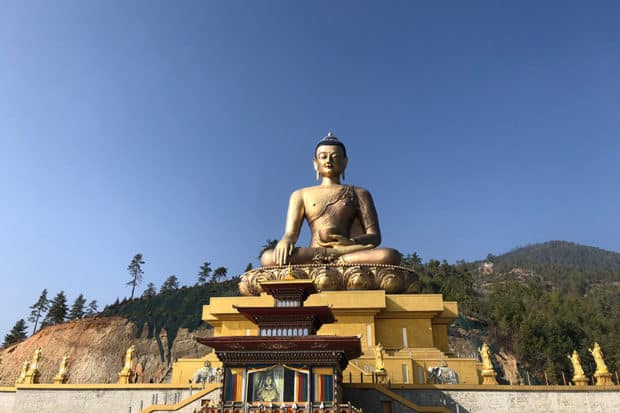 In Thimpu, the Great Buddha Dordenma (also known as“Big Buddha,” one of the largest Buddha statues in the world), was built for the 60th anniversary of fourth king, Jigme Singye Wangchuck. My guides spoke with great respect and animation as they explained the monarchy, which has been in place since the first king was crowned in 1907, after he protected his country from the invasion of the British Raj. In 2008, the fourth king introduced GNH, Gross National Happiness, as a governmental philosophy. GNH upholds the belief that citizens’ happiness does not depend on the nation’s fiscal wealth.

En route to our next stop, Punakha, we stopped for a blessing from a monk (who was also my guide’s uncle) at the monastery that sits next to the famous 10,200-ft. clifftop Dochula Pass. The monk was dressed in a deep burgundy and gold robe. In conjunction with our blessing, we learned more about Buddhism and the religion’s connection to GNH. Compassion and respect for all living things is the basis for most Bhutanese, who also believe in karma, a philosophy that connects the past and future through the present.

While walking through the small village of Punakha, I noticed phalluses ornately painted on many of the homes. I learned that the Bhutanese celebrate a very different kind of holy man from what you might expect: The Divine Madman. According to folklore, this was a Tibetan who came to Bhutan and earned a reputation for drinking, seducing women and blessing people by whacking them on the head with a wooden phallus. It is understood that the Madman taunted the hypocrisy of established orders, including the mundane cultures of religion. In Punakha, there is a monastery that gives fertility blessings to couples, which requires a whack on the head with a 10-inch wooden phallus. While this practice may seem strange, there is proof from couples who have made this pilgrimage from all over the world. In the monastery, there is a thick photo album comprised of smiling families that might otherwise not exist.

Paro was the final destination of my trip. This is where the famous Tiger’s Nest Monastery sits, perched on the cliffs. Approximately 200 flights of stairs later, we arrived at an uncrowded site (it was the off season). Observing the view, I thought about everything that had led me to this place: a career change, a lot of planning, and of course, a burning desire to experience Bhutan. Some 10,000 feet up in the Himalayas, Bhutan had become completely familiar. It was a place whose people could not be more humble or welcoming; a place comprised of beautiful scenery, mainly still untouched by tourists; a place that challenged my beliefs; and a place that made me believe in magic.

Contact Indagare  for assistance planning a vacation to Bhutan. Our specialists can plan a complete itinerary that includes guided tours and special access to cultural sites.