Shopping Guide: The Best Stores in the Marais, Paris

Le Marais, a historic district stretching across the third and fourth arrondissements on the Right Bank, is one of Paris’ top neighborhoods for shopping. Numerous stores in the Marais also stay open on Sundays (when many other shops across the city are closed), so the area promises a vibrant day of shopping no matter when you visit. The best streets to stroll in the Marais and Haut Marais (Upper Marais) include Rue des Francs Bourgeois, Rue de Saintonge, Rue de Turenne and Rue Vieille du Temple. On Rue de Bretagne, you can also visit the neighborhood’s classic Marché des Enfants Rouge, Paris’ oldest covered market.

Below are some of our favorite shops in the Marais:

Karl Lagerfeld (25 Rue Vieille du Temple; +33 1 4274-1915): Karl Lagerfeld’s second concept store in Paris offers the Marais a futuristic shiny black facade marked by a striking white neon in the shape of the designer’s unmistakable silhouette. The merchandise is a mix of his own designs (men’s and women’s prêt-à-porter) and other items, including cell phone cases, key chains and wallets, handpicked by the fashion icon.

L’Eclaireur (40 Rue de Sévigné; +33 1 4887-1022): The famous concept store has several locations in Paris, but this is the one not to miss. Designed by artist Arne Quinze, the space is a veritable installation, with high-tech touches like 150 video screens that guide you through. 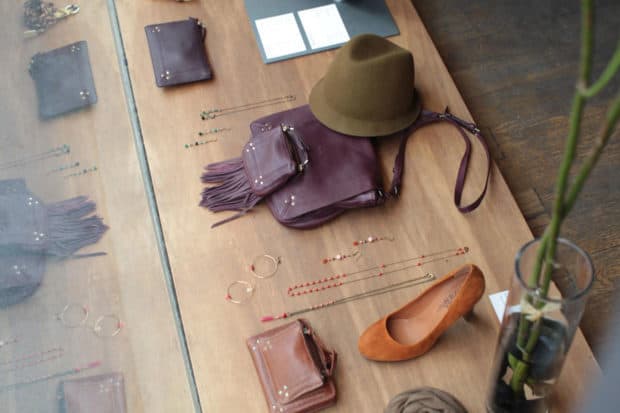 Leon & Harper (95 Boulevard Beaumarchais; +33 1 4271-2501): This Parisian label is known for its flattering women’s wear. Flirty, but never frilly or fussy, Leon & Harper is a go-to source for trendy accessories like hats, scarves and bags, as well as a good bet for staples like sweaters and jeans.

Merci (111 Boulevard Beaumarchais; +33 1 4277-0033): This concept charity shop put the Haut Marais on the map as a must-visit shopping area. Located in a former furniture fabrics warehouse, the 1,500-square-meter space has an artsy vibe and a wide range of products, mixing contemporary designs and antiques, vintage and designer clothes, hardware, flowers and books. There’s a restaurant and a café, and Merci also lays claim to being the city’s first “charity shop,” as a portion of the store’s proceeds benefit a children’s charity.

Swildens (16 Rue de Turenne; +33 1 4271-1220): Swildens is a good bet for street-smart essentials like slouchy sweaters, leather jackets and slim pants—everything you will need to imitate the stylish laissez-faire look of all those cool Parisiennes.

Related: Spotlight on The Haut Marais 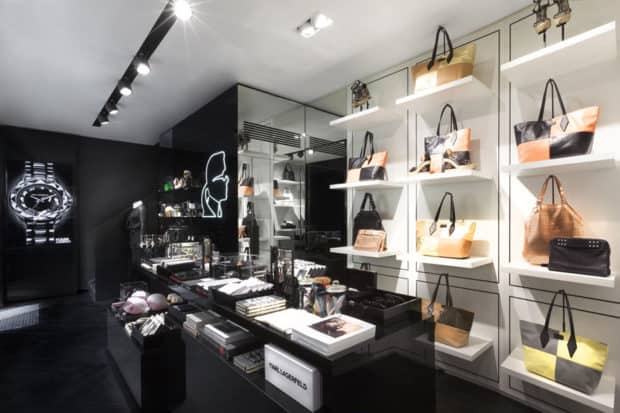 Guerlain (10 Rue des Francs Bourgeois; +33 1 5301-0200): The legendary Guerlain, which has temples of beauty around the world, is one of the few places to buy great perfume or make-up on Sundays. This branch in the Marais is less formal than many of the others, with the atmosphere of a modern dressing room.

The Different Company (10 Rue Ferdinand Duval; +33 1 4278-1934): This beauty company was successfully built on the idea that putting together a team of super creative people could result in a new kind of luxury product. One artist conceives of the bottles, another works on the scent and others on the brand concept and store design. The results have caused a sensation, with all sorts of discerning tastemakers clamoring after their scents. 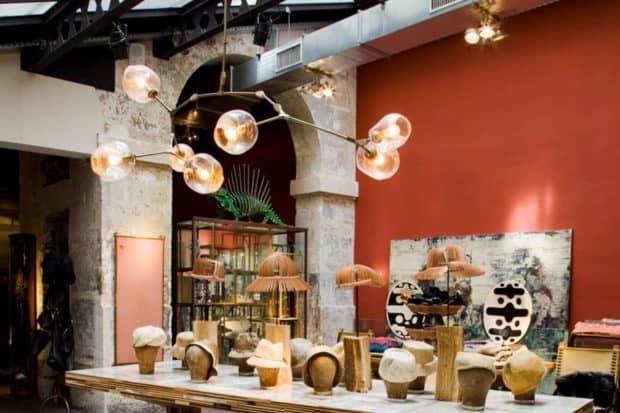 Edwart (17 Rue Vieille du Temple; +33 1 4278-4892): You might mistake this “haut chocolaterie” in the Marais, which shows off jewel-like creations in elegant glass vitrines, for one of the art galleries that dominate the trendy neighborhood. Indeed works of art, Edwart’s chocolate creations are known for featuring exotic spices and unexpected flavors like Indian curry, Iranian saffron, Japanese ginger and Lebanese coffee.

Jean-Paul Hévin (41 Rue de Bretagne; +33 9 7260-8202): Not your average candy shop, this chic boutique has a sleek, minimalist interior and sells only “grand cru” chocolate. In addition to bonbons and truffles, you’ll want to sample Hévin’s famous hot chocolate—silky and not too sweet—with a macaron.

La Chocolaterie de Jacques Genin (133 Rue de Turenne; +33 1 4577-2901): Trained as a chef and pastry chef, Genin invents new concoctions in his Parisian laboratory, including his famous éclair au caramel and chocolate bonbons. In his gorgeous space in the Marais, fans can view his open workshop (up the winding staircase) as well as sample his products in the ground-floor tasting room.

Maison Plisson (93 Boulevard Beaumarchais; +33 1 7118-1909): Often referred to as the “Dean & Deluca of Paris,” this modern epicérie fine opened in 2015 to much fanfare. Selling fresh organic produce and high-quality delicacies sourced from top-tier purveyors, Maison Plisson prides itself on its wide array of French products (more than 80% of the goods for sale are made in France). 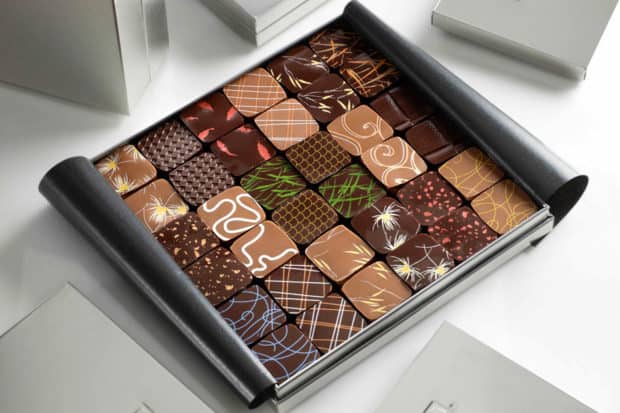 Caravane (6 Rue Pavée; +33 1 4461-0420): For those who love a bit of the exotic arts from Morocco, Thailand or Bali, but don’t want to hop on a plane, Caravane is the answer. You can find authentic lamps, Arabic cushions, Berber rugs, Pacha beds and Tanger footstools, as well as pure linen sheets, table accessories and more.

Empreintes Paris (5 Rue de Picardie; +33 1 4009-5380): The Haut Marais is not lacking for concept stores, but this one sets itself apart by focusing on limited edition objects and original artworks made by French craftsmen and artists. In addition to offering more than a thousand made-in-France goodies, the four-story building is home to a café, bookstore and projection room.

Calligrane (6 Rue du Pont Louis-Philippe; +33 1 4804-0900): With a selection of 200 handmade papers from all over the world, this is the address for precious and unique writing paper and instruments. Parisians consider Calligrane the ultimate source for calling cards and personal stationery.

Mélodies Graphiques (10 Rue du Pont Louis-Philippe; +33 1 4274-5768): Located in the Marais, Melodies Graphiques is a treasure trove of stationery, with vintage letters lining the walls and prints hanging from the ceiling. From notebooks and sketchpads in vibrant prints to stencils and watercolors, each piece is well-priced and expertly curated. 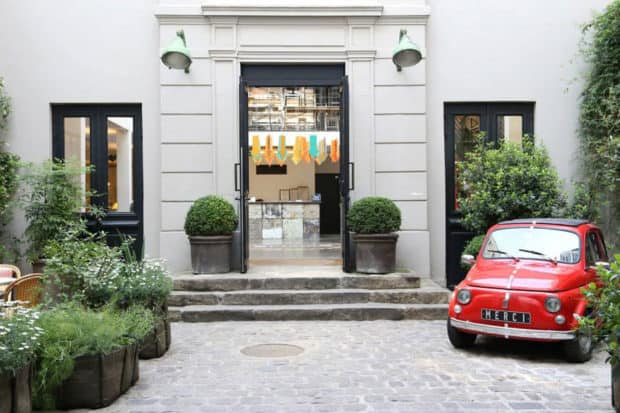 Bonton (5 Boulevard des Filles du Calvaire; +33 1 4272-3469): This gorgeous children’s store features soaring rooms filled with the company’s memorable children’s clothes as well as small toys. The window displays are as imaginative as the embroidery on the little frocks, many of which you’ll wish came in adult sizes.